For most gear geeks, big box stores are a disappointment. Generally the most you can expect to find are some of the nicer Kershaw models, or, if they cater to hunters and law enforcement, a few Benchmades. The one store that broke that model was Sport Chalet. In the year and a half prior to going out of business, the knife case at my local Sport Chalet expanded from the usual suspects – Kershaw, Gerber, Leatherman, a few Benchmades – to include some of the more exotic SOG knives, as well as a few offerings from a relatively new company: Steel Will. Buy the Steel Will Modus at BladeHQ

At the time, Steel Will was producing high-end backlocks and a range of fixed blades, and though the designs were attractive, I was never comfortable ponying up the $200+ dollars for a knife that was too big to carry on campus. After trying and failing to buy a Gekko 1552 on the cheap at my local Sport Chalet’s closing sale, I put the company out of mind, assuming that they wouldn’t leave much of an impact in the market.

I couldn’t have been more wrong. Nick Shabazz’s review of the Cutjack caught me completely off guard, as not only was this not the Steel Will I was familiar with, but he compared it favorably to the Ontario RAT 1 and 2, both of which are stellar knives for the price. Steel Will was back on my radar, and it was only a matter of time before one of their products ended up on the review docket.

As it turns out, I didn’t have long to wait. Thanks to an informal giveaway hosted by @brancon (a reader, listener, and all-around great guy), I’ve been able to tote the Steel Will Modus F25-12 around for a few months and gather my thoughts on it, which are collected below. Since I came by the Modus because of someone else’s generosity, it only makes sense to pass it along to the community. Read on to learn how you could win one of the better value knives available.

The Steel Will Modus is 7.625” overall, with a 3.25” blade housed in a 4.375” handle. Though it doesn’t approach the “voodoo” territory of the Kizer Feist, the Modus does fit a wide, long blade into a fairly compact handle. There is no sense of wasted internal volume like there is with, say, the Spyderco Manix 2LW. Due to the nested, skeletonized steel liners, it’s also relatively lightweight at just 3.39 oz, and thus manages to feel stout but not bulky. Fair warning: though it may not feel like a large knife in the pocket, the blade is probably a bit too long for some office environments, and is certainly too long for some city ordinances. Size considerations aside, the profile of the Modus’s blade is one of my personal favorites, a modified sheepsfoot (which is arguably just a funky drop point). The gentle, continuous curve of the edge is perfect for everyday cutting tasks. It’s just as good at breaking down boxes as it is preparing a picnic lunch, and as most of the spine’s thickness is carried to the tip of the blade, it should be able to handle some incidental abuse without pause. In keeping with the theme of general utility, the Modus features a high flat grind. When done right, flat grinds are lean cutters that don’t get bound up in stubborn material like cardboard. Done wrong, they’re sharpened prybars. The success of any given flat grind is mostly dependent on two factors: 1.) how thick the blade stock is, and 2.) where the grind starts. A thick blade can be a fine cutter if the grind starts high enough (the Spyderco Techno is a good example), and a thin blade can be robbed of its potential if the grind starts too low (for instance, the ZT0450). The Modus has the best of both: thin blade stock, at just .11” thick, and a high flat grind. Unlike most imported value knives, the Modus does not have 8Cr13MoV stamped on the blade. Instead, its blade is made of D2, a not-quite-stainless tool steel with a reputation for toughness and edge retention. My experience with the Modus bears that reputation out. It retained a serviceable (if not outstanding) edge after breaking down a pile of boxes, and it didn’t pick up any chips during the task, either. Unfortunately, it is prone to staining, if not rusting, and I’ve gotten into the habit of wiping it down with some cleaner after carrying it for the day, whether I used it or not.

The Modus’s handle is, in silhouette, a lean, organic, and slightly aggressive design. Its green FRN scales are supported by nested, skeletonized steel liners, as well as a black stainless steel backspacer. That sounds like a recipe for success, and it would have been, were it not for one problem: the handle pattern. The splotchy, mismatched flecks reek of the 1990s. If I more than glance at the handle scales, I’m immediately whisked back to the cartoons and advertisements of my youth. Despite finding the handle ugly as sin, I can’t deny that it’s ergonomically superb. The finger indexes suggest rather than demand where your fingers fall, the steel backspacer serves as a counterbalance for the heavy blade, and the generous contouring of the FRN scales ensures that there’s no truly incorrect way to hold the Modus. Even the pattern is functionally excellent, as it lends grip without creating a single hotspot. If a knife is comfortable to hold, it’s comfortable to carry, at least in my experience. The Modus’s slim profile, contoured handle, and unobtrusive weight all suggest that it should be a fine pocket companion. The pocket clip (often an afterthought for designers) is flawless, neither shredding the lip of my pocket nor making the act of stowing or retrieving it a nuisance. Unfortunately, Steel Will has the same problem with flipper tabs that Cold Steel has with, well, knives. Namely, that small isn’t a dirty word. At the risk of parroting Nick Shabazz, he was spot on in calling it a “pocket pecker”. It might as well be a woodpecker, tapping away at whatever else is floating around in my pocket. It’s not a dealbreaker, but it’s certainly not endearing. Fortunately, the Modus’s flipper tab isn’t a total loss. It may not play well with others, but it does just fine as a deployment method. The tab can be pushed (like a button) or pulled (like a lightswitch) to deploy the blade, and each method works well. I’ve had slightly better luck treating it like a button, as the detent isn’t quite crisp enough to open the blade without a bit of extra force behind it. The pivot runs on washers, and the action isn’t especially smooth. (Take that with a grain of salt, however: I tend to overtighten pivot screws on my knives.) You know you’ve seen too many framelocks when a liner lock feels like a refreshing change of pace. Snide commentary aside, liner locks – this one included – are great. Compared to framelocks, liner locks are less likely to screw up the ergonomics, they’re easier to replace if something goes wrong, and they’re more than strong enough to handle whatever a rational human would use a knife for. The lock on this particular model consistently engages 30-40% of the blade tang, and there is no lock stick, lock rock, or blade play. Disengaging the lock is simple, as the locking leaf is slightly proud of the FRN scales and machined for extra grip. My quibbles aside, the Modus is a great knife, especially for the price. Its D2 blade stands head and shoulders above the hoard of budget knives and their 8Cr13MoV steel; factor in the excellent ergonomics, sturdy pocket clip, and reliable (if not great) deployment, and it’s easy to forgive the Nickelodeon-esque handle pattern and oversized flipper tab.

Even so, the competition is quite stiff. Ontario’s RAT 1 and RAT 2 are highly regarded, feature the same materials, and come in at a similar price point. I suspect they’re even made in the same factory, so really, pick whichever model suits your fancy. The Kershaw Skyline is a perennial favorite, if a bit more expensive. I’d consider the 14C28N steel to be a step up from D2, but others can justifiably disagree. Still, the Skyline is a hair too nice to really abuse, and the more robust Modus is better suited to, say, a construction site.

There’s always room for a knife like the Modus in someone’s toolbox. Those on a budget will appreciate that it punches above its price point, and those who’ve long since abandoned rational purchases will be happy to know that their beater knife is still a well-made tool.

As stated in the introduction, I’m giving the Modus away. All you have to do is leave a comment below. A week after this post goes up, I’ll select one commenter using a random number generator, and ship the Modus out to them. Shipping is on me if the winner is within the United States. Apologies for that, but international shipping is a pain.

Next up: the Tactile Turn Shaker V2. 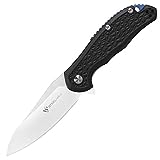 Editor: I recommend purchasing the Steel Will Modus at Amazon or BladeHQ. Thanks for reading.