One of the biggest events of the year for knife nuts is Blade Show. Put on by Blade Magazine, this industry wide convention draws a cavalcade of steel-toting enthusiasts to Atlanta, Georgia, where custom knives are fought over and new production designs are revealed. For the last several years, their Overall Knife of the Year award has been granted to blades that are…let’s say, of questionable utility. Beautiful, and without a doubt technical marvels, but they bear more resemblance to concept cars than to utility vehicles. To find designs that are within the reach of the hoi polloi, one should look at some of the more obscure awards, which focus on budget, innovation, and place of origin. Buy the Manix 2 LW at BladeHQ

This review focuses on one such design: the Spyderco Manix 2 Lightweight, which won the 2010 Blade Show award for Most Innovative American Design and has since garnered quite a bit of critical praise. Nowadays, the Manix is seen as part of the vanilla Spyderco line, but that’s not how it’s always been. At the time, it seemed like the Manix was the way of the future. Thin, fully flat ground blade? Check. Thumb hole? Check. Innovative lock that kept your fingers clear of the blade? Also, check. That all of these features are found at a pretty economical price point and on a blade that’s made in the U.S.A. is impressive today, but was a much bigger deal when the question of the day was Benchmade vs. Spyderco.

The Spyderco Manix 2LW measures just over 8” overall, with a 3.37” blade and a 4.66” handle. The Manix 2 LW is made in the USA. As its name would imply, the Manix 2LW doesn’t weigh much – only 2.9 oz. – a weight that’s pretty remarkable for a knife this size. It’s worth mentioning that the cutting edge is actually 2.88” because of the inclusion of a 50/50 finger choil. I applaud that decision. Spyderco is famous for their ergonomics, and the finger choil is part of that recipe. Spyderco chose Carpenter’s BD1, a relatively unknown steel, for the lightweight version of the Manix 2. According to the data sheets, BD1’s performance should be the equivalent of high quality 440c. Most online feedback indicates the same. In my experience, it’s been difficult getting the BD1 as sharp as I’d like. Its edge retention isn’t the best, and requires regular maintenance. If there is one attribute it excels at, it is corrosion resistance. I’ve forgotten to clean this knife after cutting citrus before, but even that didn’t leave so much as a mark.

For all the questions about the blade steel, Spyderco hit it out of the park with the blade shape (and grind). The leaf-shaped blade is a mainstay in their product line and never disappoints. When paired with a full flat grind and fairly thin stock (.125”), you’re almost guaranteed success. Extensive use in the kitchen and the field bears that assumption out. My sharpening issues aside, the blade performs very well. The smokey mirror finish Spyderco put on the Manix is easy to clean and doesn’t attract fingerprints like a higher polish would. The handle on the Manix 2 Lightweight is made of fiberglass reinforced co-polymer, or FRCP. It is very similar to the fiberglass reinforced nylon (FRN) Spyderco uses on the Delica/Endura/etc. When compared side by side, FRCP is stiff, while FRN has a bit of give to it (akin to rubber). I own knives with both as handle materials, and I don’t know if I have a preference. As with any plastic handle, there will be folks who complain about the material feeling cheap, but I don’t mind it. I prefer the translucent blue handle over the black handle. This knife is very well-suited to backpacking, and a bright handle helps ensure that your knife doesn’t get lost among the foliage. I’ve found the ergonomics to be just as good as I’d expect from an in-house Spyderco design (read: excellent). Some folks complain that the handles are too blocky. Those people need to find something else to complain about, because I could not find a fault with the ergonomics. The 50/50 finger choil allows the user to choke up for better push cuts, while the rear grip is well-suited for slicing and draw cuts. Spyderco’s bi-directional grip pattern is very effective at gluing your palm to the handle without being abrasive. I will say I could do without the jimping on the interior of the handle. Spyderco’s wire clip seems to be pretty polarizing, at least if you take online comments seriously. Some love it because it’s discrete, doesn’t generate a hotspot, and doesn’t shred the edges of your pocket. Those who hate it complain that the wire clip wiggles around and doesn’t offer enough tension to keep the blade secure in the pocket. I’m in the former camp; every wire clip I’ve handled has had plenty of tension, and I prefer the practical advantages outlined above. Between the low weight and excellent clip, this knife is a dream in the pocket (particularly for its size). I’ve mentioned this before, but the knife market is almost exclusively focused on flippers right now. Personally, I’ve always preferred the thumb hole as a deployment method. They’re just as easy to flick, but much better when it comes to slow-rolling the knife open. I also don’t wear my fingers out fidgeting with Spydercos the same way I do when I’m messing around with a flipper. This is a very nice execution of the thumb hole. At 14mm, it’s large enough that opening the knife is never a problem, even while wearing gloves. The interior of the cut out has been nicely polished and slightly chamfered.

If it wasn’t for the lock, I probably wouldn’t like this knife as much as I do. The Manix is equipped with the Caged Ball Bearing Lock, which is frequently compared to Benchmade’s Axis Lock and SOG’s Arc Lock. All three offer ambidextrous manipulation of the lock without putting your fingers in the path of the blade. Out of the three, the CBBL is my favorite. It fixes the one problem that I have with the other offerings: a weak detent. On the Manix, the detent is not only quite firm, but crisp as well. There’s a level of security knowing that the blade isn’t going to flop open with a wave of the hand. My thoughts on the Manix 2LW are generally positive. If it weren’t for my issues putting a keener edge on the BD1, I’d carry it more frequently than I do now. Even with that handicap, it’s a great knife. The Manix 2 LW is available at most retailers for around $80.00. If you’re worried about the steel (my experience seems to be an outlier), Spyderco also offers the Manix 2LW in CPM-S110V for around $35 more. That aside, the Manix is arguably in an awkward spot on the product line. For a relatively small amount of money, you could instead purchase a Paramilitary 2, which is widely regarded as one of the best knives available (regardless of price point). This begs the question: budgetary concerns aside, is there a niche the Manix fills that the Paramilitary doesn’t? I think there is. As much as I love my Paramilitary 2, I think the Manix 2LW actually makes for a better outdoors knife. Specifically, for backpacking. The bright handle, low weight, and easily maintainable steel are all desirable qualities for a blade you can tote into the backcountry.

Whether you want a knife for the outdoors, or you’re looking for a bigger everyday carry blade, the Manix 2 Lightweight is sure to satisfy. 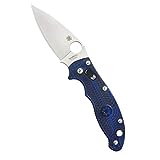 I recommend purchasing the Spyderco Manix 2 LW at Amazon or BladeHQ. Please consider that purchasing anything through any of the links on this website helps support BladeReviews.com, and keeps the site going. As always, any and all support is greatly appreciated. Thank you very much.