Last Updated: July 31, 2019
The Spyderco Manix 2 is one of those knives that I have been meaning to review pretty much since the start of this website. I’ve examined a lot of blades since then and now I finally have my thoughts on the Manix 2 together and can write on this fantastic heavy duty folding knife made in the good ole USA. Buy the Spyderco Manix 2 at BladeHQ

The Manix 2 is what I would call a “medium” sized folding knife. It is stoutly built and highly functional. We are looking at an overall length of 8 inches and a blade length of 3-3/8 inches. At 5 ounces this knife is going to be heavier than most other knives “in its class” but what you get for this weight is a strong design with killer ergonomics. Just to put things into perspective, the Spyderco Tenacious has roughly the same dimensions but comes in a full ounce lighter.

Part of what makes the Manix 2 on the heavier side is the hollow saber grind (also it has full liners – more on that later). This makes for a stronger blade, but the trade off is weight. Many users don’t particularly care for the saber grind, preferring a full flat grind. In that case, I would advise trying to find a “sprint run” (limited edition) of the knife as Spyderco often makes them with a full flat grind (like the version wearing BD30P in my video review). The blade shape is a classic leaf design and the tip is fairly delicate. There isn’t a ton of belly on this knife, but I find its plenty for most every day tasks. Blade steel on the standard Manix 2 is 154CM. A classic steel, 154CM is known for being an all around performer. Edge retention, rust resistance, toughness and sharpen-ability are all good.

I gotta say though if you want a more exotic steel or a full flat grind, Spyderco has been rolling out some really cool sprint runs of this knife. It’s going to cost you more, but it’s possible to get this knife in S30V or even S90V, although you might have to head to the secondary market to do it. Who knows, down the road Spyderco might release this knife exclusively with a full flat grind like they did with the Endura and Delica, so if you like the saber grind I would get it while you can.

The Manix 2 has a tried and true handle design: G10 scales over stainless steel liners. The G10 on the standard Manix 2 is black and well textured. I would say the G10 is aggressively textured and provides great grip and tactile response. The liners run the entire length of the handle and are not milled out (or “skeletonized”) at all in the standard version which adds substantially to the weight of this knife. The handle is a partial flow through construction with a metal backspacer taking up the front part of the handle, and some pillars holding the back part of the handle together. Another notable feature on this handle is the over-sized lanyard hole. For a stout blade like this, a large lanyard hole is a very practical feature – if you take this knife camping or regularly engage in long and heavy cutting tasks, a lanyard could be a great option for you.

The ergonomics on the Manix 2 is where this knife really shines. At a glance you can see all kinds of stuff going on with the handle. First off, you have two large choils. This allows you to choke up on the blade for detail work generally get a comfortable grip. Also, a liberal amount of jimping has been applied to many parts of the handle (including the thumb ramp and choil of the blade itself). This jimping is very sharp (some say it’s even “too sharp”) and ensures your fingers wont slip. This is a super comfortable knife and it works well in many grips. Combine that with that extra bit of weight and I find it hard to put this one down.

The only downside to the great ergonomics is that the handle (and folded knife) is kind of bulky in the pocket. You get a great handle but you lose some ease of carry. The pocket clip is a classic Spyderco “hourglass” clip, mounted very high on the knife for a nice deep carry. It’s not a 4 corners clip, but it allows for ambidextrous tip up carry which works very well for me. The rough G10 may start to tear up your pocket a little – if that happens you may want to consider sanding part of the G10 down.

Deployment with the Manix 2 is a snap. Spyderco selected an oversize 14mm thumb hole for this knife and it performs as well as it ever has. Of course, you have your standard phosphor bronze bushings which help speed things along, but I find the weight of the blade makes this knife deploy with great ease and authority.

The Manix 2 has a pretty unique locking system. It is a “ball lock” and it functions in fashion similar to a Benchmade Axis lock. A spring loaded piece (in this case a steel ball bearing partially encased in a chunk of polymer resin) is what holds the blade in place. The knife has a very solid lockup that can be disengaged without putting your fingers across the path of the blade. Note that the spring is very strong on this ball lock so it can be difficult disengage the lock with one hand and it may stick a little until the lock has fully broken in. I’ve found that it is entirely possible with a little practice to disengage the lock one handed (especially once the spring breaks in a little), but there may be a slight learning curve. Also, please keep in mind what I said in the “purpose” section about spine whacks – while I think this is a very strong lock, it does appear to have an Achilles heel and there are confirmed reports of the lock failing when subjecting to spine whacks. I never advocate “spine whacking” a folding knife, but I want “keep it real” here and help you make a decision that is right for you.

Update – Apparently Spyderco has since fixed the problem with the lock mechanism failing when spine whacked. These new knives have a black ball lock rather than a clear one. I have yet to get my hands on one of these new versions, so maybe it’s time I picked up a new Manix 2 XL and checked it out.

Currently you can get a Manix 2 for right around $80 shipped, and a low as $70 shipped if you want a combo edge or serrated version. At either price I think the Manix packs a ton of value. When you consider that this knife has excellent blade steel, an awesome handle, a rock solid locking mechanism AND is made in the United States, it definitely has some value. Also, this isn’t some dinky folder either. This thing is built tough and I would put the ball lock right up there with the Axis lock and could see this knife being used hard for a long time. Spyderco has done it again. The Manix 2 pretty much has it all. Two of my biggest gripes include that the knife doesn’t come with a fully flat ground blade, and it’s heavy. If you opt for a sprint run version you can avoid these negative aspects. I also tend to find the ball lock a little clunky in comparison to an axis lock, but I know plenty of people who prefer Spyderco’s ball lock.

While I can’t say it’s my absolute favorite Spyderco (I’d put both the Sage 1 and Paramilitary 2 ahead of the Manix – just my preference), it’s a beefy knife with solid ergonomics, and is both well thought out and highly functional. Although the price tag has crept up over the years, I also like how the Manix 2 is made in America and can be had for under $100. The collect-ability of the knife is also very cool as Spyderco has released numerous Sprint Runs and spin off versions of the knife. 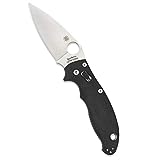 I recommend purchasing the Manix 2 at Amazon.com or BladeHQ.

Photo Credits: Many thanks to Cougar337 for the beautiful Manix 2 photographs! Thanks again!!