Howdy knife nuts. It’s been awhile. Long story short, I’m working two jobs right now, so I haven’t really had time to focus on gear. Hopefully this review is a sign of more to come. I’ll be the first person to admit that I don’t “get” cleaver-style pocket knives. When they started to appear in catalogs and Instagram feeds, I couldn’t shake the feeling that they’d be a pain to carry and an easy way to spook people. From the oversized blades to the chunky grinds, there just didn’t seem to be a case for them. So when Dan asked if I’d be interested in reviewing the Kizer Mini Sheepdog, I was a bit reluctant, but ended up saying yes, in part to challenge my own prejudices. Fortunately, I ended up being pleasantly surprised. Read on to learn more.

Full disclosure: this knife was provided cost-free by Kizer. While the company’s reputation for quality is high enough that I feel comfortable claiming that my sample is representative of the line at large, some of you might feel differently.

The Kizer Mini Sheepdog weighs 3.15 ounces, has a 2.63” blade, and measures 3.6” long while closed. It’s neither a featherweight nor a brick. The blade is short enough to be legal to carry in most US cities, and I’ve yet to encounter someone put off by it, despite the distinctive blade shape. On the whole, the quality of construction is excellent, and I was pretty impressed when it slid out of the box. Depending on your point of view, the Mini Sheepdog’s blade is either the draw, or the drawback. If you like cleaver-style blades, then this should be right up your alley. The lines are bold, the modified wharncliffe reinforces the tip quite well, and the shallow belly of the blade makes it a fine utility cutter.

The blade steel is VG10, a Japanese steel whose reputation has suffered quite a bit over the years. When I first got into this hobby, VG10 was lauded for its rust resistance, ability to take a keen edge, and easy maintenance. Those haven’t changed. Nowadays, however, you are more likely to hear about how quickly VG10 loses an edge, and part of that is because of the rapid pace of technology. Amazing steels are available at hitherto unheard-of prices. Still, if you regularly touch up the edge on a strop, you won’t be disappointed. Just don’t try to break down a pile of cardboard boxes: the edge will disappear long before you’re done. Despite the slightly outdated blade steel, the Mini Sheepdog is still a lean cutter. The combination of a tall blade, .125” stock, and keen flat grind make for a very effective slicer, especially during food prep. Don’t mistake my meaning: this isn’t a replacement for a Swiss Army Knife, let alone a kitchen knife. However, if you need a utility knife that can also slice an apple on your lunch break, this is a fine option.

Like most of the Vanguard line, the Mini Sheepdog’s handle is comprised of G10 scales over stainless steel liners. Both materials are excellent choices for working tools, provided that the manufacturer puts the time and effort into properly finishing them. G10 is lightweight, durable, and isn’t damaged by moisture, but if it isn’t sanded down or contoured it can be rough and uncomfortable in the hand. Stainless steel, depending on the treatment, isn’t necessarily rustproof. Fortunately, Kizer knocked it out of the park here. The G10 scales are smooth enough that they won’t wear out your pockets (or hands, for that matter), yet have enough texture to remain grippy in adverse conditions. Likewise, the stainless steel liners are polished enough to ward off most incidental rust (though, full disclosure, I live in what is technically a desert).

The ergonomics on the Mini Sheepdog are perfectly serviceable. There’s little to complain about, but not much to write home about, either. I can get three and a half fingers onto the handle of the Mini Sheepdog, but most of the time it’s a three-finger knife. The hump-backed handle coaxes your fingers into a slight pistol grip, which might be annoying if that wasn’t how I used most of my work knives already. As I mentioned in the introduction, one of my concerns regarding cleaver-style blades was that they’d be a pain to carry. Luckily those fears weren’t justified. Yes, the Mini Sheepdog is a bit wide, but it’s not so wide that you can’t reach past it to grab the keys at the bottom of your pocket (which is the real test, in my experience). The pocket clip is perfectly functional. It doesn’t damage pants, it’s not difficult to remove or stow, and it doesn’t generate hotspots. In a world filled with terrible pocket clips, “perfectly functional” is high praise. Liner locks tend to get a bad rap these days. Ever since framelocks started to dominate the market, liner locks have seemingly been relegated to the realm of budget knives, and that doesn’t seem quite fair. More often than not, a liner lock is actually more effective. They don’t change the geometry of the handle when the blade is deployed, they’re just as strong, and they’re much easier to replace in the event of catastrophic failure, so I’m more than happy to see a liner lock on the Mini Sheepdog. As the locking liner is made of steel, there’s no break-in period or galling issues. More importantly, there is neither horizontal nor vertical play in the lock, and lock-up is stable at around 50%. I didn’t expect to like the Mini Sheepdog at first, but it’s since won me over. The cleaver-style blade was neither off-putting to strangers nor did it make the knife a pain to carry. It’s a fine cutter, perfectly sized for everyday needs, and falls at a great price point, especially considering the materials and quality of construction.

Honestly, I’ve been out of the loop for too long to comment on what slice of the market the Mini Sheepdog is competing with. If I might borrow from fellow BladeReviews writer Ben Schwartz, the Mini Sheepdog, much like the Begleiter, “sails perilous close” to waters dominated by the sub-$100 Spyderco offerings, but these are old and well-established stalwarts. In my opinion, the Mini Sheepdog has enough charm to stand on its own, and its materials and quality of construction are at least as compelling.

If you like cleaver-style blades, but don’t need to perform ad hoc butchery, the Mini Sheepdog is right for you. It’s inexpensive enough to test the waters, innocuous enough to fly under the radar, and handy enough to keep around alongside much more expensive knives. 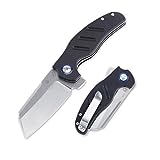 Editor: I recommend buying the Kizer Vanguard Mini Sheepdog at BladeHQ or Amazon. Thank you for reading.