I’m not sure any single knife company has impacted the industry more in the last ten years than Kizer. They may not have been the very first company pushing the boundaries in terms of price-to-performance, but they were the first one to get lots of attention in so doing, not only forcing their existing competitors to deliver more value for money, but also informing new companies’ entry into the knife world. Reate, WE, Ruike, Real Steel, Artisan, Steel Will, and many others owe something, I think, to Kizer’s precedent.

Buy the Kizer Begleiter at BladeHQ

But after laying the template for the modern enthusiast knife – titanium frame lock, ball bearing flipper, trendy designers, sub-$200 price tag – Kizer seems to be fading into the background somewhat, getting drowned out in the bustling genre that it more or less established.

Which would be a shame, because Kizer has a lot to offer. While their various followers have gone up into the high high-end, playing with baroque stylings and highwire feats of machining prowess, or down into true budget territory, delivering good steel at great prices, Kizer has walked the middle ground. Their catalog mixes price-consciousness with smart, attractive designs, value with subtle flair and desirable designer pedigree. Kizer knives may not be flashiest or most fun, but they are often reliable, intelligently-designed, well-made and relatively affordable.

And speaking of well-made reliability and smart design, we come to the Begleiter. This knife has been around for some time and, although I don’t get the impression it was a massive immediate hit, it seems to have accrued some word-of-mouth mojo over the years; you definitely see it around. In part this can be chalked about to the impulse buy (for knife nerds) price tag, but also I think thanks to the (you guessed it) quality materials and solid, all-purpose design.

The Begleiter has a blade length of 3.5 inches, an overall length of 8.125 inches, and weighs 3.8 oz. It is made in China and came impeccably fitted and finished. My particular Begleiter might look a little road-weary in the pictures, because it came to me at a time when I needed to do a lot of outdoors, yard-worky-type stuff. There’s a lot of unruboffable plant viscera on the blade, and some gunk in the pivot I’ve yet to wash out; but fresh from the factory, it was in pristine condition. The Begleiter’s blade, a mid-sized drop point, doesn’t feel as long as it is, and it’s actually wider and stouter, blade stock-wise, than you’d think just looking at pictures of it. Flat ground, but not overly thin behind the edge, it’s a capable, durable slicer. I cut cardboard, paper, weeds, dug in pebbly garden soil, and accidentally banged the edge a couple times against brick; throughout it all the Begleiter cut well, and withstood my misuse with rugged stolidity. I actually like the look of the smoky gray titanium coating, and it held up well through the testing. VG-10 – a good, good steel; I already knew I liked it, but I did learn one new thing about it in testing the Begleiter, and that’s that it can be relatively durable, despite its reputation for brittleness. As I said earlier, I smacked my Begleiter against bricks during multiple lapses in my bladesmanship. However, it only chipped at the very outermost, wafer-thin part of the tip, and there just minorly. I was impressed all over again. It’s not my favorite steel to sharpen up, but not so ornery I’d be hesitant to recommend it even to non-knife nerd users.

I’m not sure that Kizer still adheres to the old nomenclature for their various lines, but if they do the Begleiter falls into the Vanguard class, which means standard Vanguard handle materials: G-10 scales and stainless steel liners. On the Begleiter, those liners stand proud and letterbox the scales, and both scales and liners have been chamfered extensively.

Like the blade, the handle is less narrow in person than it looks in pictures, and the letterboxing on the handles injects dimensionality into the grip. Those proud liners are shiny-smooth, and the chamfering makes them feel almost crowned. The lone finger groove is well-proportioned, and the finger guard/pivot area doesn’t push your hand so far back that you feel like you lack control over the blade. I don’t know who designed the Begleiter; I thought I found out the name of the man behind it at one point, but now I can’t seem to track that information down. So maybe I misremembered, or maybe it’s a Kizer in-house team effort; but either way the designer (s) deserve credit for a thoughtful ergonomic layout. Less thoughtful, but by means bad, is the Begleiter’s clip. It doesn’t have a particularly appealing look, nor does it offer deep carry, and the contact point is right on the un-smooth G-10. That last point is one uncharacteristic bit of boneheadedness in the design of this knife. Granted, it’s an oversight most companies make, but it’s still disappointing. On the positive side, the clip’s tension is just right and it vanishes when you’re using the knife.

Thumb stud and phosphor bronze washers: that’s the good stuff. This setup, combined with spot-on detent tuning, means the Begleiter’s blade pops into place when you flick it open – and you will be flicking it: a slow roll open is possible but this is a blade tuned to fly, and fly it does. I’m not much of a knife fidgeter these days but even sitting here writing the review I keep picking up the Begleiter and popping it open and closed. It’s fun, addictive, and most importantly reliable in use. The stop pin is also plenty large and durable too; there’s nothing I dislike or would change about the opening configuration on the Begleiter and it’s one reason why I’m not at all interested in the new, premium, frame lock flipper Begleiters that recently released.

Here is a size comparison with the Spyderco Delica 4:

Are we past the age of dodgy lockups? I don’t remember the last knife I handled with a bad lock, or even a lock that has been anything less than great. Makers all around the world have been expected to Do Better in recent years, in no small part thanks to companies like Kizer setting new standards for quality in all price ranges.

Unsurprisingly, then, I have no complaints about the Begleiter’s liner lock. There’s still not an iota of play in any direction after many bouts of rugged and ungainly use. A cutout on the show side scale gives nice access to the locking leaf, and disengagment is as frictionless as the lockup is firm. Again, good stuff.

Let’s be frank: the Kizer Begleiter is not a knife that it’s easy to get excited about, here in 2019. Its materials are good, but not outstanding. The fit and finish is great, but so is the fit and finish on many, many other knives. The design is smart, but subdued almost – almost – to the point of colorlessness.

At $60 it’s a good value, but also sailing perilous close to the fatal Endura/Delica 4/Chaparral Lightweight Bermuda Triangle where other value-driven knife designs get lost forever. You struggle to find anything bad to say about the Begleiter, and use it approvingly, but it doesn’t endear itself in any singular way.

Which is maybe (definitely) a silly thing to ask a knife to do. If you’re looking for a good knife in this price category, this is a good choice, a smart choice even. If you have a friend who isn’t really into knives but could use one, this is one you could hip them to. I think this is money better spent than buying most Kershaws, for instance (although again, the shadow of the sub-$100 Spydercos looms large…).

In 2019, the Begleiter is a perfect synecdoche for Kizer itself. In the turbulent, baroque, saturated knife market, where we were spoiled for choice years ago and now we’re somewhere beyond spoiled, it can be easy to lose sight of Kizer. But they’ve maintained a steady output of sensible, solid, well-made and generally well-priced designs. You may not be wowed when you pick up a Begleiter, but you definitely won’t be disappointed either, and that’s worth something. 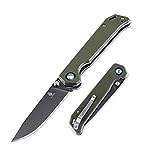 Editor: I recommend purchasing the Kizer Begleiter at Amazon or BladeHQ. Please keep in mind that purchasing anything through any of the links on this website helps support BladeReviews, and keeps the site going. As always, any and all support is greatly appreciated. Thank you very much.