Last Updated: September 7, 2019
Kizer’s 2017 catalog wasn’t released to the same fanfare as Spyderco’s or KAI’s. That may be partially due to the fact that it’s massive. Most of their old designs are still on there, so don’t worry, there’s no need for panic purchases a la Spyderco’s discontinued list. At the same time, Kizer has collaborated with a host of new makers so up and coming your plaid-bedecked neighbor who won’t shut up about vinyl records hasn’t even heard of them. In the interests of full disclosure, you should know that this review sample was provided by Kizer. While that won’t have an impact on my impartiality, there is the risk that the product I was sent was double or triple checked for quality, and that my sample is the best of the brood. That risk is counterweighted by Kizer’s deserved reputation for high manufacturing tolerances. In other words, I don’t think you need to worry about it.

The Kizer Alter Ego falls into their “Bladesmith” line, which is seemingly reserved for collaborations with custom makers. I was surprised to learn this, as the Alter Ego seems aesthetically similar to many of Kizer’s in-house designs. Searching for “Kim Ning” and “Kim Ning Knives” yielded no results outside of Kizer products. It may be that he is better known internationally, or that he doesn’t have an English website, but I suspect that (much like Jim McNair of KAI) he’s a full time designer for Kizer.

The Kizer Alter Ego has a 3.55” blade housed in a 4.625” handle. Overall, it’s 8.125” long and weighs 4.91 oz, with a blade thickness of .1375”. For some this isn’t terribly large, but it’s definitely more knife than I’m accustomed to. To their credit Kizer kept the weight pretty low. As a point of comparison, it weighs only .6 ounces more than the Zero Tolerance 0900, but has a .85” longer blade. Those numbers might not look impressive on paper, but trust me when I say that the difference is significant in person. The blade itself is made of S35VN, a powder metallurgy steel developed by Crucible as the successor to S30V. Prior to the revolution of high-end Chinese manufacturers, a steel like this would have been unheard of on a Chinese knife. Times have changed, and now it’s sound business sense for companies like Kizer to import high performance steels. S35VN is a particular favorite of mine. It retains S30V’s wear and rust resistance, but doesn’t chip as frequently. I’ve used the Alter Ego frequently (if not rigorously) over the past month, and the experience matched my expectations. As nice as the S35VN is, I wish it had been paired with a plainer utilitarian blade. The Alter Ego sports a drop point blade with a profile that echoes the Viper Dan 2 or the ZT0770 (both blade shapes that I love), but which is drawn up into a recurve closer to the base of the blade. While by no means a dramatic recurve, it exaggerates the belly enough to make certain tasks – press cutting in food preparation, for example – less predictable than a continuous curve or a straight edge. If I found myself cutting rope on a regular basis the recurve would have more appeal, but my needs are fairly pedestrian. Much like the blade, the handle is comprised of organic, muscular lines. In some respects it’s comparable to the Hinderer design aesthetic, but where Hinderer relies on hard angles and a very industrial appearance, Kizer turns to curves that are almost anatomical. In keeping with this, ornamentation is kept to a minimum. I’m not normally a fan of decorative pivots, but Kizer’s rendition is eye-catching, subtle, and most importantly is torx compatible. The ergonomics on the Alter Ego are good, if narrow in application. It’s difficult to tell from the photos and product literature, but the handle coerces your fingers into something akin to a pistol grip. That’s not necessarily a downside, especially if you’re in the market for a tactical folder. This knife won’t leave your hand unless you want it to. However, it’s less than ideal for everyday tasks, such as preparing a picnic lunch or opening a clamshell package. While the design is ergonomically sound, if not to my taste, there is one flaw in the execution: the pocket clip. It’s not offensively bad (like this little guy), but it does generate enough of a hot spot to cause some discomfort. Gloves and careful finger placement mitigate this problem. The clip aside, Kizer put a lot of work into making this knife comfortable. All the edges are buffed and all the corners are softened. Kizer clearly knows how to make a knife comfortable. The Alter Ego is pretty quiet in the pocket. No one could call it svelte – it is fairly wide, and nearly an inch of the handle sticks out past the edge of the pocket – but for a knife this size, it’s better than I expected. The aforementioned contouring keeps it from feeling like a brick in your pants, and though the clip detracts from the blade’s ergonomics, it also ensures that an errant seat belt can’t make off with your rather expensive pocketknife. As with most of Kizer knives, the Alter Ego’s blade is deployed via flipper tab. Sadly, Kizer committed something of a cardinal sin in the design stages of the Alter Ego: they put aggressive jimping right under the flipper tab. For the first two or three days I carried it, my index finger would slam right into the aforementioned jimping every time I flipped it open, leaving my finger raw and smarting. Eventually my technique improved and the problem went away, but it was a literal pain to deal with. It’s a shame that such a flaw wasn’t caught earlier, because otherwise deployment on the Alter Ego is perfect. The detent is crisp and firm, and there’s not a hint of grit in the bearing pivot. It’s not as snappy as the action on my ZT0900 – there’s more of a hydraulic feel to it – but that’s a matter of taste, not quality. Deployment on both knives is as smooth as glass. Commensurate with Kizer’s reputation, the frame lock on the Alter Ego is perfectly executed. There is zero wiggle in the lock while deployed, and because of the steel insert there’s no break in period or risk of the lock face galling inappropriately over time. Since arrival, the lock has consistently engaged the blade tang at about 50%, though it should be noted that 100% of the steel insert engages the tang. Said insert also functions as an overtravel stop. To round things out, Kizer also milled a slight cut out in the handle to make the lock more accessible. At a price point that hovers between 160USD and 180USD, the Alter Ego is competing with the premier lines of most brands; within the genre – titanium framelock flippers – it’s directly competing with most of Zero Tolerance’s catalog. While I’m not going to wade into the waters of which brand I prefer (the gaming industry has console wars covered), I can say that the Alter Ego is as well made as any normal run ZT. That’s pretty high praise, all things considered. End of the day, this knife isn’t for me. It’s too big for my purposes and definitely has a different end user in mind. That said, everything else about the knife – the manufacturing tolerances, materials, attention to detail – is fantastic, and clues me into just how much I’ve been missing out on by not trying a Kizer sooner. If the design of this knife appeals to you, I’d wholeheartedly recommend it. If the quality of the Alter Ego is representative of their entire catalog (and the community’s response indicates that such is true) then I wouldn’t hesitate to buy any Kizer knife if the design appealed to me. 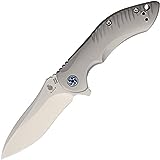 I recommend purchasing the Kizer Alter Ego at Amazon or BladeHQ. Please consider that purchasing anything through any of the links on this website helps support BladeReviews.com, and keeps the site going. As always, any and all support is greatly appreciated. Thank you very much.