Last Updated: August 11, 2019
By the time this review is published SHOT Show 2017 will be old news. But as I write this introduction, the releases from SHOT are still fresh in my mind. After perusing everyone’s catalogs, I’ve noticed something; something that I’ve been waiting to see for some time. You see, it appears that the knife industry has finally realized that not everyone wants to (or is capable of) buying knives that cost upwards of $200 at a sustainable rate. Well…part of the industry at least. There was a bevy of budget and mid-priced blades released at SHOT, and one of the more impressive showings was put forward by CRKT. Apart from undercutting the Snailor market, they also expanded their collaborations with Jesper Voxnaes, who designed a few knives for them last year. The 2016 models didn’t seem to grab the attention of the knife community. I’d venture that the reason why is that they lacked Vox’s typical design language: bold lines, dramatic edge profiles, and a quintessentially Nordic minimalism.

Happily for us, it looks like CRKT realized the amount of money they were sitting on and tapped Mr. Voxnaes for some of that Danish magic. While most of these collaborations are enticing for one reason or another, I eventually ordered the Compact Batum. After more than a month of on and off carry, I think I’ve got enough experience to offer my opinion.

The Batum has a blade length of 2.45”, a closed length of 3.71”, and weighs 3.6 ounces. The Batum is made in China. These are some pretty middle of the road performance specs, but it’s a big step up from the relatively chunky specifications on the Squid. By comparison, the Batum has a longer blade and a more comfortable handle for nearly the same weight. Fit and finish is likewise improved: centering is perfect, primary grind is symmetrical, and everything is nice and polished. The only “real” complaint I can register is that the secondary bevel gets a bit wobbly near the tip. Not bad for a sub-$30 blade. I’m working on a standardized cutting test, but until then, you’ll have to rely on my ad hoc testing. That means two (incredibly unscientific) tests: one for edge retention and one for slicing performance. I don’t test rust resistance or chipping: not because they’re unimportant, but because those faults – if present – are typically revealed without any help. To measure slicing performance, I used the Batum on a diverse array of fruit, including apples, pears, and oranges. It quartered the pears just fine and peeled the oranges with ease. The Batum split – not sliced – the apples, but to be fair they were large and crisp. Ideal for eating, not cutting. During normal use, the 8Cr13MoV held up fine. It’s the budget steel of choice for Chinese made knives, and I wasn’t surprised to see it featured on the Batum. I strop it twice a week or so and that’s kept it serviceable. The only opportunity I had to “rigorously” test the edge retention was using the Batum to break down a pile of cardboard boxes destined for the bin, during which it exhibited odd behavior. After a few boxes, it wouldn’t cut as cleanly, but when I checked the edge against my thumb it was still passably sharp. The Batum just kept slipping out during protracted cuts. It’s likely a combination of the dramatic belly and budget steel. As soon as the edge starts to degrade, the blade will start to slide more in cuts. This in turn means you’ll glance onto that steep belly and slip right out of the material. That’s not to say I dislike the blade shape. While the belly is too dramatic for my tastes, it does occasionally come in handy. On a cutting board, it allows for great slicing cuts, much like the front end of the Spyderco Zulu. A buddy of mine who’s an electrician also swears by the Vox blade shape, as he loves the straight edge for cable work. I was on the fence about reviewing the Batum; originally, it was a toss up between it and the Pilar. Both looked interesting, but in the end the G10 scale of the Batum was the more attractive proposition, as the G10 substantially decreases the weight and improves the grip. Still, I had concerns. On cheaper knives finishing is often the first thing to go, and if the G10 was as raspy as, say, Cold Steel’s, I’d be put out to say the least. Luckily that wasn’t the case. Out of the box I was impressed by the fit and finish on the Batum. The G10 was perfectly textured: not rough enough to feel like sandpaper, but just enough to register a grip. Both the steel and the G10 scales are generously chamfered. Even the backspacer – one of my complaints from the CRKT Squid review – is perfect. Not only is the machining improved, but the dark grey doesn’t have the “off-white next to regular white” look that the Squid’s backspacer had. The ergonomics on the Batum are tough to evaluate. When it first arrived, I noticed within seconds that the forward finger choil was too small for my hands. I couldn’t choke up on the blade without feeling like the knife was about to bite me. So – as shipped – the ergonomics were poor to say the least. Fortunately I have a set of diamond stones for my Spyderco Sharpmaker, and after a day or two of intermittent filing, the choil was big enough to accommodate a four finger grip. It was relatively easy fix, but buyer beware. In the pocket, the Batum is an excellent companion. It carries quietly, and even though it doesn’t have a deep carry clip, it doesn’t leave enough of the butt end hanging out to alarm the masses. The clip seems like it could be a real paint scraper. I haven’t run into that issue personally, but that may just be luck. For deployment, the Batum features Vox’s signature thumb…eye…thing. Folks online seem to love it; a deranged few like it more than the Spydie-hole. It’s arguable that it offers the ease of deployment that a thumbhole does without the larger footprint in the pocket, but I find the thumbhole easier to use most of the time. Mastering deployment on the Batum took all of a day on my end, so it’s probably not a major issue for most users. The teflon washers give deployment a slightly hydraulic feel. My only complaint is that the bit of the handle that covers the tang also blocks the path my thumb follows when I’m flicking the knife open. It’s less of an issue now, but you may need to spend some time getting acquainted with the Batum’s deployment. I’m really tempted to just copy and paste the lock-up section from the Squid review. Nothing is really different here: lock up is stable at 50%, there’s no blade play in any direction, and there’s no lock stick. Disengagement is simple despite the lack of a cut out to access the lock. There is one improvement – if a negligible one – over the frame lock on the Squid, and that is the addition of an overtravel stop. Is it necessary? Probably not, but some will appreciate it, and there’s no real downside to its inclusion. For the money, it’s difficult to find a more compelling knife. There’s the perennial Alox Cadet, of course, but that’s hitting a slightly different need. You can find the Batum for around $30 after shipping, and I think it’s a steal at that price. It’s better finished than the Cryos that I’ve handled, the design is (in my opinion) much more attractive, and you don’t have to deal with an assisted opening. The ergonomics – once adjusted – are better than most knives in this price range. It may be a bit chunky behind the edge, but no worse than the Squid. Knowing all that, who should buy the Batum? Well, fans of Jesper Voxnaes should probably line up. This knife has most of the design cues Vox is famous for: burlesque drop point, simple lines, and an open profile that’s strangely animated. While not perfect – the drop point is a tad overdone, and the choil may need tweaking – it’s one of the strongest budget knives to hit the market in quite some time. 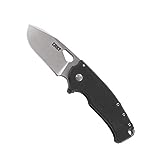 I recommend purchasing the CRKT Batum Compact at Amazon or BladeHQ. Thanks for reading.