At long last, the Kershaw Cryo. This is another one of those Hinderer/KAI collabs that tantalized knife collectors back at SHOT Show 2011 (or was it 2012? the years just blend together). Whichever year it was, we waited what seemed like forever for this little knife. Finally, after eons of patiently waiting, this much anticipated design hit the shelves. Reactions ran the gamut from exalted praise to abject horror.

Buy the Kershaw Cryo at BladeHQ

I’m not going to lie, the mixed reviews turned me off from checking out a knife I was initially interested in. But then I realized, “Hey, that’s what I do – I check out knives.” And I’m guessing people want a review on this one, so I finally picked one up. So lets get on with my review of the Rick Hinderer designed Kershaw Cryo.

The Cryo has an overall length of 6.5″, it features a 2.75″ blade, and it weighs 4.2 ounces. This is a small (albeit chunky) folder primarily meant for EDC. I’ve been carrying mine as an EDC knife, and it gets the job done.

Guys who like larger knives will probably want something else, and guys who like lightweight knives will also probably find something lacking in the footprint of the Cryo. Personally? I don’t mind the weight and have a soft spot for small knives – this made for a reasonable EDC in my book.

The blade is an attractive drop point design, reminiscent of Rick’s other creations (and collaborations with KAI, including the ZT 0550 and ZT 0560). You have a good amount of belly, a small swedge, and a high hollow grind. The Cryo has a fine tip and gets reasonably thin behind the edge. It makes for a capable slicer when working with materials like leather and cardboard. The entire knife (blade and handles) have been given a gray titanium carbo-nitride coating. It’s an attractive finish and a refreshing departure from Kershaw’s standard value folder formula of a black FRN handle with a plain bead-blasted blade.

Kershaw went with 8Cr13MoV stainless steel for this knife. 8Cr is a Chinese stainless and the choice makes sense when you realize the entire knife is made in China. Given the price I don’t have a problem with the steel or the origin of manufacture. 8Cr13MoV is capable. I cut about 60 pieces of 3/8″ manilla rope with the knife before moving on to several cardboard boxes. At that point the edge was more or less done, but it quickly came back to life with some swipes on a diamond stone. I then carved some 2x2s with the Cryo, testing edge strength and the overall capabilities of the knife. Then I did it all over again because I lost my original video footage (d’oh!). All things considered, the 8Cr held up well – it’s about as good as it gets these days with a $30 folding knife.

The Cryo features full stainless steel handles. The gray handles are mated to contrasting black hardware. No doubt the stainless steel construction adds greatly to the weight. I can’t help but wonder what this knife would have been like with a G10 handle scale (a la Hinderer’s real knives) or maybe even G10 and stainless steel liners. Either way construction is solid and reasonably well finished. It’s a flow through design and the decorative black pillars and lanyard tube look nice against the gray steel. All the corners have been more or less rounded and everything lines up. I have no major issues with the way this handle has been constructed. For light use the Cryo feels pretty good in hand. This is a smaller knife, and I was able to just get a 4 finger grip on it. I take a large glove so I think most people will be able to comfortably grasp the knife for daily tasks. The steel handles are fairly slick, but this is a little EDC blade, and jimping top and bottom side adds a lot of traction in hand. Under harder use (stuff like cutting rope and carving wood) the knife isn’t particularly comfortable, but for more EDC type tasks (cardboard, plastic, etc) the ergonomics were fine. If you are going to sit down and do half an hours worth of cutting like I did you will definitely notice a few hot spots, how rough the jimping is, etc. So it’s not the most comfortable knife, but for casual use and the occasional chore you should be able to get stuff done without huge issues. The pocket clip is a blackened low rider clip allowing for 4 corner carry. The clip is small and discrete, and it inserts and removes easily from the pocket. This is a relatively new pocket clip design for Kershaw, and I happen to like it. The Cryo carried well considering and was there when I needed it. As for the 4.2 ounce carry weight, well, I’m sure some will notice the Cryo’s presence more than others. I found that I didn’t like carrying this knife with dress pants, but had no issue with shorts or blue jeans. It’s one of those “your mileage may vary” things, so please plan accordingly.

The Cryo features both thumb studs and a flipper, and the knife makes use of Kershaw’s Speedsafe assisted opening technology. The flipper is nice and easy to reach, and the blade springs to life with very little effort. The thumb studs on the other hand are almost impossible to use. They really serve no function. I think Kershaw should have spent some more time on this, either figuring out how to make the thumbstuds usable or removing them from the finished knife. As it stands, it seems half baked, like something was lost in translation from design to realization. As for the Speedsafe, I happen to like it on this knife. The Cryo is small and can be difficult to orient in your hand, so a spring assist to ensure deployment every time works well for me. Lockup is accomplished via a stainless steel framelock. This pays homage to Rick’s custom and production titanium framelock knives. Lockup is early and relatively secure. Sometimes my knife gets a little side to side play and requires a twist of the pivot screw – not a huge deal. There is also Hinderer a lockbar stabilizer installed on the knife to prevent over extension of your steel framelock. This is a cool high-end feature found on knives like my $400 Strider and of course the ZT/Hinderer collabs as well.

On paper the Cryo seems like a decent little knife – and it is. It’s small, cool, and functional. It comes with acceptable blade steel, a nice pocket clip, and fast action. I don’t regret the purchase, and think the knife is fairly priced at $32. It’s not amazing, and certainly isn’t a hall of fame budget knife like the Spyderco Tenacious, Kershaw Skyline, or Ontario Rat 1, but it’s a unique knife for Kershaw, is decently made, and I’d generally say it’s a win.

That said, the knife is a little rough around the edges, and I feel like it could have been so much more. For example, the blade is massively off center (not rubbing, but almost), the thumb studs are useless, and at 4.2 ounces, well the knife is heavy for what it is. There just seems to be a lack of attention to detail that slightly derails the knife. I find it especially ironic considering that the biggest selling feature is the Hinderer name – a name built on extreme quality and high end knives. I’m not expecting a $30 XM-18, but no doubt people interested in a Hinderer designed knives are “knife people” – not the average person contemplating the purchase of a $30 pocket knife at Wal-Mart. Real knife people care about stuff like material selection, fit & finish, and functional design. Perhaps this knife could have played in the $50 price point and appealed more to higher end enthusiasts as well.

So a big part of me wishes Kershaw spent some more time on this one – ironing out the kinks, making it in the USA, and delivering something of real substance. Sure, it may have to retail for $50+ instead of $30, but I think people would pay for it, and the knife would have real staying power. As it stands I view the Cryo more as a flavor of the week than a timeless tool that will become a new benchmark in its class.

In conclusion, I want to emphasize that the Cryo isn’t a “bad” knife. $30 isn’t much money for a folder these days, and I enjoy the knife for what it is. But I still can’t help but wonder what it could have been. 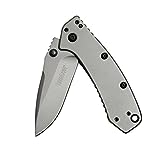 I recommend purchasing the Kershaw Cryo at Amazon or BladeHQ. Please consider that purchasing anything through any of the links on this website helps support BladeReviews.com, and keeps the site going. As always, any and all support is greatly appreciated. Thank you very much.