I didn’t get it. After tearing open the box and turning the knife over in my hand, I simply didn’t get it. Flat colors. Slow deployment. Boring construction. This is the legendary Spydiechef? It’s a weird-shaped blade sandwiched between two pieces of gray titanium, with a retail price of $215. What manner of magic has bewitched my fellow knife lovers? Buy the Spyderco Spydiechef at BladeHQ

And yet, I seem to land smack in the middle of the Spydiechef’s target market: Knife guys (check) who care deeply about edge retention and rust resistance (double check) and encounter a variety of daily cutting tasks (indeed) while also cooking on the go with some degree of regularity (bingo). Designed by the legendary Marcin Slysz and manufactured by Spyderco’s wizards in Taiwan, this knife should be right up my alley. And, while it may not have been love at first sight, the Spydiechef spent the last few weeks working its way to the head of the table.

Dimensionally, there’s nothing too special here. You’re looking at a 3.32-inch blade, with a thickness of just under 0.12-inches. The handle/closed length is a middling-sized 4.46-inches, stretching the overall number to 7.78. Weight is low (3.8-ounces), thanks to the Chef’s flow-through titanium chassis. You’ve got the standard Spyderco wire clip, which can be mounted on either of the side slabs. Boring bronze washers, a snooze-inducing frame lock, and *yawn* a lanyard hole.

Here is a size comparison with the Spyderco Shaman: But, it’s not the specs that make the Spydiechef such an excellent knife. It’s those delicious details that will bring one into my permanent collection.

Let’s start with the blade. Its LC200N steel has been formed with some sort of metallurgical witchcraft. While we’ve seen “rust-proof” steels before, such as H1 on Spyderco’s Salt line, this stuff is a whole new animal. Here’s what the maker has to say about LC200N: “This state-of-the-art nitrogen-based alloy is extremely corrosion resistant and is actually used by NASA for the ball bearings used in aerospace applications.” Sounds great, but ball bearings aren’t known for holding an edge.

This is where Youtubers like Pete from Cedric & Ada come into play. His barrage of edge-retention and corrosion tests has established LC200N as one of the premier steels for EDC tools. While I didn’t subject the Chef to these sorts of extreme conditions, I can confirm that it showed no sign of rust after multiple cooking sessions. I’ve used this knife almost every day since it arrived, and the edge has yet to dull or dim. The Chef’s blade shares two traits with many of my favorite cooks – It’s friendly to strangers, and it’s all belly. Despite its 3-plus inches of shiny steel, the graceful curve of Slysz’s design is easy for even the more paranoid to stomach. And, thanks to its flat grind and Nick Shabazz sharpening job, it’s been a slicer since day one. The Spydiechef’s handle is gray, like the color of boiled meat or the hair of an overworked cook. This titanium blandness was at least partially responsible for the knife’s poor first impression. But, once I got it in the hand, the subtlety of Slysz’s design became immediately apparent.

Take a look at my hand position: Beyond its ergonomic excellence, the curve of the Chef’s titanium handle offers a significant advantage in the kitchen. It keeps the edge (mostly) below my knuckles, greatly easing the slicing and chopping process. Not as much as a dedicated kitchen knife, sure, but more so than any other folder I’ve handled. The pocket clip offers another bit of subdued excellence. On the surface, it appears to be just another iteration of the classic wire clip. But take a look at that angle. It allows the knife to curve down and into the back of the pocket, keeping it out of the way of whatever else you may be carrying. There are a few caveats here. While the reversible clip makes this technically an “ambidextrous” knife, the placement of the lock bar in relation to the Spydie-hole will make one-hand opening a challenge for lefties. And, though it’s technically stainless, the titanium handles do pick up smudges and snail trails. Neither of these is terribly troubling to me, though. I’m more than pleased with the Chef’s ergonomics, both in the hand and in the pocket.

As evolutionary as the rest of the Chef may be, the knife’s deployment and lockup are as basic as bacon and eggs. Not to say that chicken ovum and cured pork aren’t delicious (they are), but there’s a skill to handling even the most humble of ingredients. The combination of Spydie-hole and bronze washers is classic – Never flashy, but accessible and delicious. It’s a no-fuss, low maintenance setup for those who use their knives rather than playing with them. If there’s one complaint I have with the Chef, it’s the closing action. Have you ever worked in a restaurant? The closing shift almost invariably sucks. Same goes for the Spydiechef. You have to nudge the blade up and over its detent, which requires applying force to the blade while your thumb is still in the slicing path. Exert too much pressure, and it could theoretically pop down and filet your knuckle. Now, I haven’t had this happen. The detent is soft enough that a gentle push will pop it over the ceramic ball. But, it’s definitely something that requires some fine motor skills. This is a knife that’s put my collection in crisis. Between the Spydiechef, the FRN Chaparral, and the Kershaw Atmos, the other folders in my case aren’t getting much pocket time. The Native 5 has subbed in for a day or two, but the Kizer Begleiter, Steel Will Cutjack, and even my ZT0562 have been unable to crack the rotation.

This knife is so damned good that it’s dampened my enthusiasm for other knives. And honestly, I think I’m okay with that. This is a tool I feel good carrying, using and, in the near future, owning. It’s the Chaparral all over again – Nick Shabazz loans me a knife, and I wind up buying one. Thanks again, Nick, and a hearty “Well done” to Marcin Slysz and Spyderco. 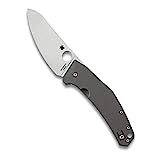 Editor: I recommend purchasing the Spyderco Spydiechef at Amazon or BladeHQ. Please consider that buying anything through any of the links on this website helps support BladeReviews.com, and keeps the site going. As always, any and all support is greatly appreciated. Thank you very much.