Last Updated: August 30, 2019
I’m going to say this up-front so that everyone knows where I stand. In my opinion, the Zebralight H52w is the best light released in the last few years. Other lights surpass singular aspects of its performance. It doesn’t have the best runtimes, the highest lumens count, nor is it the smallest light available. The user interface can be a pain. Despite that, it performs so well across the board that I often wonder if I need another flashlight. Some compromised designs are flawed because they do nothing well. Fortunately, that’s not the case here. Of course, this isn’t a controversial opinion among gear geeks. When the Zebralight SC52 debuted, it received effusive praise from the community. It was (and still is) something of a dream light. It manages to cram stellar runtimes and high output into a compact package fueled by a simple AA battery. Great as that light is, it doesn’t have the trait I wanted most: the ability to wear it as a headlamp.

Some background: I used to be in the Boy Scouts. We’d traipse all over any kind of terrain you could care to name, and I used a light on those trips on a regular basis. While most of the scouts in my troop (and some of the leaders) started out with mini Maglites, we had all switched to headlamps within a year. Headlamps let us keep our hands free while we were hiking in or setting up camp. Even at home, the various flashlights tucked away in odd nooks and crannies were gradually replaced by headlamps.

Sadly, most headlamps aren’t suitable for pocket carry. They often require multiple batteries, and though lightweight they’re often bulky. You could get away with keeping one in a backpack or messenger bag, but you’d look like a bit of a goober breaking it out.

All of that is a roundabout way of saying that the Zebralight H52w neatly solves the unstated dilemma. Whether clipped to the pocket or riding on the forehead, this light offers the best of both worlds. I’ll go into more detail below.

The Zebralight H52w measures in at 3” long, .86” wide (at the widest point), and weighs 2 oz. with the battery. That this light is considered medium size astounds me, but such is the state of the market today. For a flashlight in the 1xAA format it’s quite lean; if it were any smaller I’d worry about the durability of the light itself. Zebralight typically goes with a natural HAIII coating and I applaud the choice. I haven’t seen any undue wear, and the grey/green is subdued without being “tacticool.” Overall, the quality of construction is top notch. For someone with a reputation for being
finicky, I can’t register a single complaint with regards to construction. Some may find the appearance of the H52w odd. The angled flashlight design hasn’t been mainstream for decades, and people have become unaccustomed to it. Personally, I love the aesthetics of this light. It’s not just that the angled lens harkens back to the 1940s and 1950s, though that is part of the appeal. Moreover, between the heat sinking on the back of the lens and the scallops of the body, this light feels like the art deco inheritor of those earlier models. I could see this as a gadget for Batman in the 1990s animated show or clipped to the suit of the Rocketeer. Maybe I’ve gone off the deep end, but check out what the H52w looks like once polished and tell me it doesn’t look like a vintage ray-gun.

To be perfectly honest, I stopped paying attention to the lumens arm race after purchasing this pocket spotlight. The 280 lumen high is outpaced by plenty of offerings from competitors, but the differences aren’t enough to turn me off. I’ve used it to bike home in the dark, and the high mode lights up the path ahead brilliantly. The medium and moonlit low are very useful, the low in particular. I use Sanyo Eneloop AA’s in this light. Zebralight recommends them, and rechargeable batteries are cheaper in the long run. When this light was released, the true selling point was a moonlit low that lasted 3 months. Granted, that low only provides .01 lumens, but it’s enough light to read by in the dark. The runtimes on high and medium are also pretty impressive: 280 lumens for .9 hours, and 50 lumens for 7.5 hours. I find myself using the medium setting surprisingly often. Black widows are everywhere in my hometown, and the low doesn’t offer quite enough light to spot their little red hourglasses. 50 lumens is more than enough to notice them without competing with the headlights of passing cars. These settings may not be to your liking. Fortunately, Zebralight’s user interface allows for a certain amount of customization. Here’s the catch: accessing these extra modes requires using the advanced UI. This is the worst part of the light. I’m not going to bother explaining the advanced UI here – it’s that complex – so just go look at their website. It’s not impossible, but it does require some trial and error. As for the normal interface, I have no complaints. To turn it on in high, simply press the button and release it quickly; medium, double-click; low, press and hold for .6 seconds and release. If you want to bug your friends triple click for the strobe feature. I really appreciate that you can access the high and the low without cycling through multiple modes.

Ergonomics on the H52w are solid. It doesn’t have enough length to get more than three fingers on the light, but the scallops on the body tube aid the grip enough that I’ve never had cause for worry. The clip isn’t my favorite but doesn’t negatively impact the grip. I prefer the angled body ever so slightly in terms of ergonomics: it just feels more natural to have my hand up (as if I were holding a hammer) than down (as if I were holding a garden hose). When the H52w is strapped to your skull, it’s about as comfortable as a headlamp gets. It’s not heavy enough to pull down on the strap, and the cloth itself is fairly soft. It even pairs well with a bicycle helmet.

Both the strap and the pocket clip are well made. Some folks dislike the clip – it’s a friction clip, so in theory it can slide around – but I’ve never experienced that problem. The clip seems to be made of a spring steel, and can be attached to either end of the light. It’s worth noting that between the high tension of the clip and the grip scallops, I worry about shredding my pocket edges. That situation has never come up, but I’d be on the lookout. Luckily it carries beautifully without a clip, sliding into most coin pockets with ease. Go buy this light (if you can, Zebralight has availability issues early in the year because of Chinese New Year… no, really). There is no situation I’ve run into where the H52w was insufficient: be it housework, monkey business, or just getting around in the dark. The only people I’d not tell to buy an H52w are people who already own one. If I had to ask for a change, I’d appreciate something other than a button activated light. Selector rings are much easier to operate in general. Ultimately, that complaint can’t hold this product back. If you want a flashlight that is just at home navigating dark forest trails as it is illuminating a book (without waking up your partner), this is it. It’s a rare sort of product even years after its debut. Typically they can be had for around $64.00.

The best recommendation I can give is this: I haven’t bought a light since I purchased it, and if it was lost or damaged, I’d immediately order a replacement. Sure, it doesn’t always end up in my pockets. But like the Alox Cadet or the Paramilitary 2, I couldn’t fathom not having one for long. 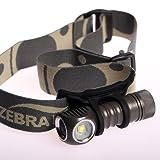 I recommend purchasing the Zebralight H52w at Amazon. Thank you for reading.