Last Updated: August 1, 2019
An often enjoyed pastime of production knife collectors is to discuss various “Sebenza Killers” arriving on the market. The Sebenza has long been considered a gold standard in high end production cutlery, and the thought that a competitor might knock the Sebenza off it’s podium has been a topic of conversation for some time. The Bradley Alias might be the most notable knife to get bandied about as a “Sebenza Killer,” and there have been several others over the years. But 25+ years later the Sebenza is still going strong, and there seems no end in sight to its reign.

Ironically, the rise of titanium framelock flippers (something Chris Reeve Knives doesn’t have an answer for) has collectors moving on to other topics, and the thought of a “Sebenza killer” suddenly seems less relevant than it once did.

Still, it’s interesting to think of knives that may stack up to the Sebenza, and as I admired my Slysz Bowie I couldn’t help but draw several comparisons to the Sebbie. Designed by Polish knifemaker Marcin Slysz, the Bowie is his second collaboration with Spyderco, with the Techno being his first.

The Techno met the market with great reviews, and remains a highly regarded production piece. The Bowie is a bigger offering. While quirky like the Techno, the Bowie has its own more business-like character. The knife is expensive, but begged for further examination. I’m pleased to offer some thoughts on the Slysz Bowie after an extended period of carry and use.

The Slysz Bowie has an overall length of 7.79″, a 3.42 blade, and weighs 4.3 ounces. The knife is manufactured in Taiwan. Depending on your preferences this could make a good every day carry piece. This is what I consider to be a medium sized knife, and it sits between the large and small Sebenza. Of course if you are looking for something smaller the Techno, also designed by Polish knifemaker Marcin Slysz, could be more your bag. I have never stressed out over blade to handle ratios, but I can’t help but feel like there is a lot of excess handle on this knife, and there is something a little funky about the proportions of the Slysz bowie.

As it’s name suggests, the Slysz Bowie features a clip point blade. This is more of a non-traditional bowie with an elongated clip, and rounded spine. The rounded spine is a lovely detail, and is one I don’t recall seeing on a Spyderco before. The blade has a full flat grind and it is very thin and slicey. The finish is a stonewash that was first taken to a high polish. The blade is still highly reflective and mirrors whatever you hold it up against. I liken it to the finish on my Fantoni CUT Flipper. Clip points have always been a very practical blade shape, and this version provides a good balance of tip strength and fine piercing ability. The cutting performance is also very good. Spyderco went with CTS-XHP, the same steel on the original Techno. I have had a good deal of experience with CTS-XHP using the Domino. Having been a fan of that steel on the Domino I immediately put the Slysz Bowie to work. This knife is a hoss, and easy handled cardboard boxes, a rope cut test, and some woodwork in addition to regular EDC chores. CTS-XHP holds a nice edge but I especially appreciate this steel’s ease of sharpening. I have yet to have any problems with rust or corrosion with CTS-XHP and so far the Slysz Bowie has been no different.

The handle of the Slysz Bowie is comprised of 2 contoured titanium handle slabs. The gentle radius of the handles is a nice touch, and it seems like that is how they were able to keep the edges crisp without the knife feeling too blocky in hand. Construction is top notch with matte gray hardware (including an oversize pivot) and a substantial black G10 backspacer. I know that the bright blue backspacer of the Techno was a favorite feature of many. Personally I prefer the more subdued appearance of the black backspacer. The backspacer is jimped in 2 places and protrudes ever so slightly from the handle scales. The light chamferring to the corners of the backspacer give it dimension and detail that belies its plain black appearance. The titanium handle slabs have been given a heavy stonewashing. The stonewash supplies the slightest amount of texture to the handles. It also makes the Slysz Bowie very easy for me to cram into my pocket without agonizing over it inviting scratches like a freshly waxed Porsche parked too close to a grocery store. Compared with the Rubicon (another recent Spyderco release) the Slysz Bowie practically begs for use. The Slysz Bowie feels pretty good in hand. There is a run of Sebenza like jimping along the spine, as well as the backspacer, and the good size handle accommodates my larger hand well. Although no efforts have been made to round the edges of the handles, the contoured titanium makes up for it slightly. The knife is fine for normal use, but I would reach for a fixed blade if I had an extended heavy duty cutting chore. The Slysz Bowie feels capable in forward and reverse grips and handles like a well-balanced medium sized folder should.

The Slysz Bowie takes advantage of Spyderco’s wire clip. It should be no surprise to regular readers that this is one of my favorite clip designs. It’s very discrete and the Slysz Bowie all but disappears into the pocket. The handle is tapped for ambidextrous tip up carry. The knife carries very well being relatively slim and relatively lightweight considering that it’s a decent sized full titanium framelock folder. I will say that I did have issues a couple times with my pants pockets binding up on the lock spring cut out on the handle when I tried to draw the knife. Being a Spyderco, this knife gets opened with its thumb hole. This is a generously sized thumb hole that is easy to access with your right hand and opens smoothly and quickly with a satisfying “thwack”. The phosphor bronze washers are very smooth and the detent is tuned to where you can easily flick the knife open but you don’t need to worry about the blade falling out of the handle.

Unfortunately, us lefties are left out in the cold. Just like with the Techno, this knife is difficult to open with your left hand. It’s not impossible, but you can’t enjoy flicking the knife open like you can with your right hand. That’s a shame because part of the appeal of Spyderco is their (usually) ambidextrous designs. I’ll stop whining as I understand that 90% of the people reading this are right handed, but I gotta “keep it real” for my fellow lefties. For lock up we have a classic titanium frame lock, or a Reeve Integral Lock (RIL) as Spyderco likes to call it. This lock does not benefit from a steel insert like some of Spyderco’s other framelocks, and my knife locks up pretty late (around 75%). That said, its a very sturdy lockup and there is no blade play in any direction. There isn’t any blade stick either. Blade centering on my example is absolutely perfect.

The Slysz Bowie is a hell of a knife, and I imagine if Spyderco released it either a few years ago or for $100 less, it would have made huge waves in the production knife scene. As it stands, it’s a beautiful knife and a solid performer. I pictured it next to my American Lawman for a reason – the Slysz is meant to be used. But I think that the $320+ price tag will scare many folks off. And the absence of a flipper, bearings, steel lock insert, and big name American designer doesn’t give it that “gee whiz” factor that seems to drive a lot of consumer attention these days.

I have justified expensive knives in the past. They are luxury goods. People buy them because they want them. Still, I think a discussion on price is appropriate here. Personally, I bought mine used for $230, and at that price I was willing to check it out. For $300 it was just too rich for my blood. While I could somehow justify paying full retail for the Rubicon, I could not do that with the Slysz.

Here is a shot of the Slysz Bowie next to another hard working knife, the Cold Steel American Lawman: I am more than a little surprised about the price of this knife, especially since the Farid Mehr K2 is a bigger titanium frame lock, has an equally exotic steel, is also made in Taiwan, and has a MSRP of a full $100 less than the Slysz Bowie. I’ve since learned that the reason for the price difference is largely due to the 3-D machined handles of on the Slysz Bowie and the polished and stonewashed blade. Whether these features are worth the $100 difference is up to you.

The Slysz Bowie is still pretty far off from what a Sebenza costs (currently $410 for a Large 21), so if Spyderco truly had a “Sebenza Killer” in mind, at least it’s almost $100 less. In many ways I like the Slysz Bowie more than a Sebenza. I prefer the full flat grind, superior blade steel, 3-D machined stonewashed handles, thumb hole, and better action. When you consider the value proposition, maybe the Slysz Bowie is priced appropriately after all.

If you can swallow the price tag, or can snag a good deal on it, this is an awesome knife. I am not ready to declare the demise of the Sebenza, but this is still a damn good knife. 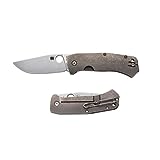 I recommend purchasing the Slysz Bowie at Amazon or BladeHQ. Purchasing anything through any of the links on this website helps support BladeReviews, and keeps the site going. As always, any and all support is greatly appreciated – thank you very much!