Last Updated: August 3, 2019
Spyderco has released a number of high end knives of the past year. Blades like the Slysz Bowie, K2, Firefly, and Burch Chubby are all retailing at north of $200. Meanwhile, there doesn’t seem to be much of interest going on in the ~$100 price point or sub $100 price points – both of which have been sweet spots for Spyderco in the past with cherished blades like the Paramilitary II, Sage, Caly 3, Dragonfly, Manix 2, and of course the Endura and Delica.

Buy the Spyderco Rubicon at BladeHQ

So I have been forced to pick my battles a little bit. I can’t review everything Spyderco turns out, especially if the majority of their stuff is going to set me back 2 bills+. So as 2014 drew to a close I decided to acquire one of their most ambitious pieces to date: the Rubicon. Retailing for over $300, this is the most expensive Spyderco I have ever acquired.

The Rubicon is a collaboration with custom knife maker Peter Carey, a designer / maker that I have previously had zero experience with. The Spyderco Rubicon is an interpetation of Peter’s custom Rubicon. Peter’s knives are meticulously hand finished and coveted by collectors, and one of Spyderco’s goals with the collaboration was to celebrate that aspect of his knives. Don’t get me wrong, this is still a production knife, but the end result, while expensive, is unlike any other Spyderco I have handled to date.

The Rubicon has an overall length of 7.48″, has a 3.03″ blade, and weighs 4.2 ounces. This folder is compact enough for daily carry, but to me it is more of a collectible. It feels very lightweight for its size, which is fantastic for daily carry, but I can’t say I remodeled a bathroom with this knife, or had it clipped to my pocket while swapping out the transmission of my truck.

The blade is a bulbous piece of S30V and the shape is faithful rendition of Peter’s custom Rubicon. I think the blade shape is a little too curvy, but it’s faithful to the original design. Of course being a Spyderco collab this blade features a thumb hole. Both the primary bevel and swedge are belt finished and the hollow grinds ripple in the light. A nice touch is the horizontally polished satin flats. This is a high end detail you don’t see on many Spyderco’s. No doubt this was done to mimic the “hand rubbed” flats of a real Carey. The end result is something lustrous and difficult to photograph.

At this point, Spyderco’s CPM S30V is a known quantity. I own several Spydies in S30V (some for 4+ years) and have been reasonably happy with their edge retention and performance, although at this stage in the game I may have preferred something a little different: S35VN or CTS-XHP come to mind. I am not too concerned about squeezing every last drop of performance out of this knife, but I would be remiss if I didn’t lightly admonish Spyderco for not springing for an even more premium steel given the price point. I suppose that just goes to show how good we actually have it.

The hollow grind is lean, the edge is keen, and I have been happy with the way this knife carves through cardboard and paper. There is a slight recurve, which has a way of improving cutting performance, but hampering your ability to easily sharpen the edge. The recurve is mild so I’m not expecting too much difficulty, but this is a knife that I will relegate to my Sharpmaker and strops for touch ups, rather than flat stones.

The handle is where things really start to get interesting. The star of the show is the 3-D machined high polished carbon fiber handle scales with bright orange G10 pivot collars surrounding an oversize decorative pivot. As an avid knife collector I have had the opportunity to get my hands on all kinds of carbon fiber handled knives over the years. I can say that this is the nicest carbon fiber and the best finished carbon fiber handle I have ever seen in the production world. The weave of the carbon fiber is ultra tight, and there are no pin holes or voids. The polish has almost reached mirror like qualities and rotating the knife in your hand reveals a depth and character to the carbon fiber unlike anything else I have seen. I have often been critical of Spyderco for using cheap carbon fiber overlays over G10 on their knives (like the Sage and Domino). They didn’t skimp in this instance.

The pivot collar, while entirely decorative, has been beautifully and seamlessly integrated into the handle. The two-tone tri-tip pivot is the nicest I have seen. The carved g10 backspacer, while bold, has also been beautifully rendered. I realize that this is starting to sound like a Jim Skelton video, but if these kinds of details mean anything to you then you will be impressed with the job done on the Rubicon. And construction of the handle is perfect. There are 2 thick stonewashed and skelotonized titanium liners. A couple simple button head fasteners hold everything together, allowing you to revel in the gloriously finished handle.

The Rubicon is comfortable and is a nice knife to work with if you can bring yourself to actually use it. Those 3-d finished handles don’t just look good, they provide plenty of meat for you to hold on to. The handle shape itself is thoughtful, allowing your fingers to wrap around it easily and naturally. You do have a forward choil of sorts that you can use to choke up on, and a short run of jimping on the spine provides tactile feedback without being overly sharp and aggressive. As for the polished carbon fiber being “smooth” and “slippery”, I haven’t had any issues holding onto this knife. The handle shape provides lots of traction naturally by virtue of its design. That said, I didn’t take the Rubicon into the shower with me, so this could be one of those “Your Mileage May Vary” situations. If you really need a high traction handle on every knife in your collection, buy a Griptilian and call it a day.

In comparison to the rest of the knife, the pocket clip seems like something of an afterthought. The clip on the custom knife is similar, so there is that to consider. The clip isn’t offensive to look at or anything, but next to the rest of the knife the simple stamped clip seems basic and stock. I will say that this is a sturdy titanium clip, and this is a step up from the clip on the Southard Flipper. I will also say that it functions fine as a pocket clip. It has strong retention and buries decently low in the pocket. The Rubicon feels lightweight for its size and I don’t notice it that much in my pocket.

The Rubicon gives you the option of a flipper tab or thumb hole, and both work well. This is the 3rd flipper in the Spyderco flipper dynasty, and the action is smooth and reliable. The detent isn’t super stong, but the way the flipper tab is canted ensures that the blade will gracefully flip open without fail pretty much every single time. The bearings are very smooth and the blade floats around the pivot.

The Rubicon makes use of a thick titanium liner lock to hold the blade in place. Mine is a little sticky. I have never been a huge fan of titanium liner locks, but I am not sure I would have built this knife any differently myself. The beautiful carbon fiber handles are the star of the show, and I think it would have been a shame (and boring) to make this another titanium framelock knife. The lock bar isn’t the easiest to get at to disengage. It’s not impossible to wedge the meat of your thumb in to free the blade, but when compared with other knives it’s a little less convenient. To be fair I think that is how Peter designed the knife – perhaps favoring aesthetic considerations over raw functionality.

Blade centering on my example is perfect.

The Rubicon is an ambitious piece from Spyderco. Overall I would say it’s a great success. Spyderco should be proud to have put together such a nice knife. Lately, Zero Tolerance and LionSteel have both been making most of the waves in the high end production knife world. In many ways Spyderco has raised their bar in terms of high end finishing and production quality. I am excited to see some of this trickle down into future offerings. No knife is perfect, and I have a couple minor quibbles with the Rubicon, but I its pros easily outweigh its cons. As a tool the fundamentals are there: it’s comfortable, lightweight, and it cuts well. That said, there were some form over function considerations with this knife, and for me it’s more of a collectable than a true tool knife. I don’t have a problem with that, but for some folks that just won’t work.

Like most expensive things, one question many will ask is, “Is it worth the money?” I can’t answer that question for you. I will readily admit that $325 is a lot of money to pay for a production knife, and I can understand if some view this simply as needless pocket frosting. I will say that I can see where the dollars go when comparing this with a Domino or Southard Flipper. The handle is truly amazing and one look at the material selection and finish work shows you where the $100 or so went. Personally, while I don’t deny that $325 is a lot of money for a pocket knife, I don’t think they are out of line with the asking price. You are welcome to disagree.

If I were to make any refinements I would address the lockbar area. I am not a knife maker so I couldn’t tell you how to take the slight amount of stick out of the lockbar. I might have opened up the lock release area to make the liner lock easier to disengage. And some sort of 3-D machined pocket clip would be uber cool. My guess is that would make the knife even more expensive.

All in all I am impressed with the Rubicon and can recommend it to die hard Spyderco fans and fans of high end production folders. The Rubicon is something truly different from Spyderco, and I am glad I selected it out of the melange of high end 2014 releases. 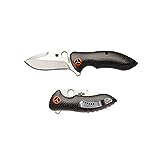 I recommend purchasing the Spyderco Rubicon at Amazon and BladeHQ. Please consider that purchasing anything through any of the links on this website helps support BladeReviews.com, and keeps the site going. As always, any and all support is greatly appreciated. Thank you very much.