Buy the Spyderco Positron at BladeHQ

The Positron is Spyderco and Southard’s second collaboration. At first glance it more resembles a piece of modern art than a knife, blending Brad’s primitive lines with gleaming steel and carbon fiber. But the simplicity to Brad’s design belies a refinement matched by few knife designers. The Positron was a knife I couldn’t help acquiring.

The Positron has an overall length of 7″, a 3″ blade, weighs 2.6 ounces, and is made in Taiwan. This is a smaller and more gentlemanly offering than the original Southard Flipper. A 3″ blade is appropriate for most settings, and 2.6 ounces is feather light. However, at slightly over half an inch thick, the Positron is a chunky folder. I may be spoiled by my Boker Urban Trapper, but at first glance the knife seemed very thick – especially given the thin and slender blade.

Speaking of blade, the Positron shares the same hook-nosed profile of many of Brad’s designs. This time things have been scaled down, and the gently curved spine meets with with a gently curved edge. There is a slight belly and the entire blade is set on a slight negative angle to the handle. Spyderco went with a full flat grind, and the blade has been given a sparkling stonewash over a highly polished finish.

Spyderco chose CPM S30V for the blade steel. I am not wild about this decision, especially for a higher end 2015 release from Spyderco. I would have preferred S35VN or CTS-XHP, but lets no kid ourselves into thinking S30V isn’t capable of peeling apples or opening mail – which is most of what I have done with the Positron. I also broke down a ton of cardboard boxes. It performed well. The bitingly sharp blade combined with a thin grind blade and fine finish make the Positron a good slicer. The narrow blade and thin grind remind me of a traditional knife, and it is slicier than the hollow ground Southard Flipper or the Domino.

The handle is where things start getting interesting with the Positron. Spyderco and Brad decided to nest skeletonized stainless steel liners into a full 3-d contoured carbon fiber handle with a low profile black G10 backspacer. The result is a dramatic yet understated handle. The carbon fiber has been left with a matte finish, and there are no voids in the carbon fiber. The end result looks simple, but only because it has been executed with such technical precision. The fit and finish is perfect on my example, and it makes for an impressive knife.

This is a smaller handle, and a number of smart design decisions make the most of it. The thickness and deep finger choil make the Positron a natural in the hand. There is a short run of jimping on the spine and backspacer. Both serve their purpose to index and secure the hand. If you are careful you can perch your index finger on the small forward finger choil and choke up. There is no texture on the handle, but that never bothered me. The matte finish of the carbon fiber is not slippery, and the Positron is comfortable for normal use.

The Positron makes use of Spyderco’s wire clip. I have come to enjoy it on a variety of my favorite Spydercos, including the Sage 1 and Dragonfly 2. This is one of the most discrete pocket clips on the market, and I can easily clip this knife to a pair of slacks without raising eyebrows from co-workers or shredding your pants. The handle has been milled for ambidextrous clip up carry.

As far as carry is concerned, the Positron is thick, but at 2.6 ounces I never noticed it. It carries discretely. I have enjoyed my Positron in the office and in the back yard. It’s a versatile tool that you quickly forget is in your pocket.

This is a rare Spyderco folder that doesn’t feature a functional thumb hole. Instead, you get a “trademark” thumb hole and a flipper as your sole means of opening the knife with one hand. The flipper is snappy and pops the knife open easily enough, but it’s still possible to “flub the flip” if you aren’t paying attention. I’d put the detent strength at a “6” on a scale from 1 to 10, with 10 being ZT 0454 thumb chafing tough, and 1 being totally non-functional. So it’s a good flipper, but not on par with a Zero Tolerance 0562 (which I might peg at an 8). There are caged bearings inside and the action is smooth.

For lockup we have a nested steel liner lock. The lock engages early and the blade is free of play. Being a steel liner lock, there is no lock stick either. I like the liner lock for a couple reasons: the knife is lighter than if it had a titanium frame lock, and it gives the Positron more of a gents folder vibe. It’s a nice change of pace from all the framelock flippers that grace these digital pages.

Readers have commented that the jimped lockbar is a little difficult to disengage, because there is no cut out on the show side handle scale. I must have fat thumbs, because I never had a problem disengaging the knife, but I see what people are saying. This is worth mentioning.

It is also worth mentioning that blade centering is perfect.

The Positron is a solid offering from Spyderco. I think it carries the torch established by the original Southard Folder and the Domino and moves things into an interesting direction. This is a more refined knife making use of real carbon fiber, nested liners, and 3-d machined scales. The blade is thin, the knife is a good size for EDC, and it carries well. It’s not as wild as the Rubicon, and strikes me as something that I actually want to carry. As usual, fit and finish from the Taichung Taiwan factory is superb. I showed the knife to my dad and he commented that it shared similarities to his Kershaw Skyline, an interesting observation that puts the Positron in excellent company.

I also think the price is fair for what you get. Retailing for well under $200, it almost seems like an affordable Spyderco – a rarity in a sea of $200+ offerings. It’s not a value monster like the Urban Trapper, but it’s not highway robbery either.

The biggest con I can come up with is that the handle is a little thick. It’s comfortable in hand, and I don’t notice the knife in pocket, but at over half an inch thick it still looks thick. The lack of a cutout for the lock release is another potential con.

Ultimately, this is a beautiful knife, and a step in the right direction for Spyderco. I look forward to seeing how their line of flippers continues to evolve. I recommend the Positron to Southard and Spyderco fans, and for those wanting a discrete and refined daily carry blade. 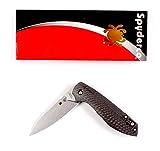 I recommend purchasing the Spyderco Positron at Amazon or BladeHQ. Thanks for reading.