Last Updated: August 4, 2019
The Spyderco Domino is a knife that I almost wasn’t going to review. I’ve been following the Titanium Framelock Flipper Arms Race closely ever since the ZT 0560 took the production knife market by storm. Like pretty much everyone else, I’ve enjoyed these knives, but felt some initial hesitance to the Domino for some reason. I talk about this in my video, but I feel like the knife was almost too easy for Spyderco. After all, it parrots many of their already successful designs only this time we have a flipper, framelock, and bearings.

Buy the Spyderco Domino at BladeHQ

Obviously I caved and bought the knife, and I am actually very happy I did. The Domino is a stellar performer and at a sub $200 price point I also think it’s a pretty decent value. Where else are you going to find the impressive feature set of the Domino, with a level of fit and finish that few companies can rival, with all the creature comforts of a Spyderco, for less than $200?

The Domino comes in with an overall length of 7.68″, a 3.13″ blade, and weighs 4.1 ounces. The knife is a decent size for EDC. It’s a little larger and heavier than my Sage 1 (the quintessential EDC knife), but it still pockets well and makes for a reasonable daily carry.

The blade is a classic Spyderco leaf shape, and includes a full flat grind, a very fine tip, and a slight curving belly. It’s everything you need for an EDC blade. The 3mm thick stock is ground thin and the knife slices well. Although I must say that I find the wide blade is a little precarious tasks like carving apples, a task I often relegate to my trusty Victorinox Alox Cadet. Still, it will slice and dice with the best of them and I find it a good match to common tasks like opening letters and breaking down boxes.

Spyderco selected CTS-XHP steel for the Domino. CTS-XHP is made in America by Carpenter, and is supposed to be formulated with cutlery in mind. In practice I think it’s a good steel. It combines moderate edge retention with an ease of sharpening that I find lacking in steels like S30V. I had no issues with chipping or corrosion, and the steel took very well to both my strop and Spyderco stones. For those interested in extreme edge retention, I must confess that I found the steel a little lacking, but I am one of those people who prefers easy sharpening to ultimate edge retention so I wasn’t disappointed. I discuss this in greater detail in my video review.

The handle of the Domino sports a faux carbon fiber scale over a titanium liner with a titanium frame lock. You also get flow-through construction, a sleeved lanyard hole, and a steel lockbar insert that doubles as a lockbar stabilizer. My biggest beef with the knife has to be the ridiculous handle scale. I suppose Spyderco wanted to step it up a bit with an unusual handle appearance, but I could have done without the Domino patterned carbon fiber. Ruminating on this further, I think the knife would have been even nicer if they went for a full titanium handle rather than the carbon fiber (which is really just a thin veneer of carbon fiber over black G10 anyway). Some may appreciate this “unique” handle material, but I think the after-market knife modifier crowd will be in business for a very long time if companies continue to release knives with such blatantly distasteful handle materials. The ergonomics of the Domino are good. This is what you would expect from a mid-size Spyderco. The bulbous handle fills the palm, while the double choils give you plenty of options for finger placement. There is a mild run of jimping on the spine of the blade that provides a little feedback without being overly aggressive, making the knife acceptable for extending cutting while still appealing to the TNP and mall ninja crowds. Although every folding knife handle is a study in compromise, I still found the knife reasonable to use in hard cutting situations like 1/2″ rope cuts and carving into bamboo. The pocket clip of the Domino is sturdy and functional, although it won’t win any beauty contests. Spyderco selected a standard hour-glass clip and gave it a lustrous black chrome finish. It definitely beats a satin finished clip, while the chromed finish gives it a little depth and character. The handle is drilled and tapped for 4 corner carry, and the knife doesn’t ride too deep in any of the positions. On these more expensive knives I tend to like a knife with a one or two position clip over a knife with tons of holes in it, but functionally speaking there is no reason to complain. This knife itself is relatively thin and light and isn’t too obtrusive in the pocket. While the pocket clip and carry isn’t anything outstanding, the knife will certainly be able to get from A to B without issue.

Of course the Domino features a flipper, after all, that’s probably why you are interested in the knife. I am very pleased to report that the knife flips phenomenally. The detent is so well tuned that the blade practically explodes out of the handle when you press down on the flipper tab. I am very happy Spyderco took the time to ensure this aspect of the knife was squared away, as the action alone makes the knife worth the price. The over-sized pivot and caged bearing system certainly doesn’t hurt the performance either, and the knife is very fluid even when using the thumb hole. For lockup you have a very nice stonewashed titanium framelock that includes a steel lockbar insert. In theory this steel insert should prolong the lifespan of the lock, and if things ever wore out you could (again, theoretically) replace the insert. In practice the knife is rock solid, without even a suggestion of blade play in any direction. Much like the other titanium framelocks I have seen come out of Spyderco’s Taichung factory, they got the geometry right and the lockup is worry free.

The steel insert also performs double duty as an overtravel-stop mechanism (sometimes called a “lockbar stabilizer”). This prevents you from hyper-extending the titanium when disengaging the lock. I’ve never had this problem, it’s a nice touch and aesthetically it doesn’t detract from the knife.

In conclusion, the Domino is one hell of a knife. Here we have classic Spyderco fare like a thumb hole, 4-corner pocket clip, and good ergonomics coupled with the latest crazes in modern knifemaking. That alone should be reason enough to give this one a try, but I am very happy to report that they really executed this right. As I mentioned alone, for a flipper aficionado the action alone will be worth the price of admission, and Spyderco has once again turned out a very high quality product from Taichung Taiwan.

Of course an obvious comparison would be with their previous flipper, the Southard, and it’s worth taking a second to differentiate the knives. First of all, the action on the Domino is vastly superior to the Southard. The detent on the Southard is acceptable, but it is weak in comparison to the crisp action in the Domino. Also, the design of Southard may be a little “out there” for classic Spyderco fans. Personally, I find the Southard to be a far more interesting knife, but to each their own. I am sure the Domino will appeal to traditional Spyderco fans.

Of course I do have a few issues with the knife, and I might as well re-cap them now. Mainly I wish they went a different route with their handle scale, but I could also do without 4-corner carry on a $200 knife, and same with a sleeved lanyard hole. I think both the lanyard sleeve and funky carbon fiber detract from the appearance of the knife. The pocket clip could use a little work too. But by and large this is a solid effort for Spyderco, and I think it will be an excellent addition to anyone’s collection of high end production knives. 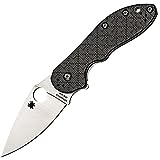 I recommend purchasing the Spyderco Domino at BladeHQ or Amazon. Thanks for checking out the review.