Recently, in a comment on an article on Everyday Commentary, the always-astute R.D. gave a summary of each major knife company’s chief weakness. For Spyderco, he said that they were “diluting their core identity (cerebral, highly engineered, function-based knives) to chase trends.”

Buy the Spyderco Clipitool at BladeHQ

I couldn’t have put my current feelings about Spyderco any better. Although the Positron or the Nirvana are beautiful, immaculately-finished, and eminently useable and enjoyable knives, I feel like they lack the spark that the best Spyderco designs have. I feel like Spyderco has the Bethesda problem: they’ve become complacent and the products they’ve been putting out recently reflect that – and even if those products aren’t bad, they’re unimaginative, and unrepresentative of what makes Spyderco special.

The last brand new Spyderco design that excited me was the Clipitool line. In particular, I had my eye on the Clipitool Driver; a tool that echoes the immortal Cadet in terms of its verb set (cut, screw, pop, pry), but with the Spyderco cerebreality that R.D. mentioned in his appraisal of the company. In short, it seemed like something special, and I was excited when Dan sent me one to review a month or so ago.

The Clipitool has a blade length of 2”, a handle length of 2 ¾”, and an overall length of about 4 ½”. It’s made almost entirely out of stainless steel, and weighs 1.9 oz. – a really dense 1.9 oz., which is to be expected given its tiny overall footprint what all is crammed into it. It’s a small knife: the Dragonfly is up a size class from this thing. And as much as I prefer smaller knives this is almost too far – almost. A knife like the Dragonfly can do about 95% of what you could expect to use a knife for in normal, day-to-day life; the Clipitool’s micro blade can do about 90%. Food prep is out of the question, so if that’s something you use a pocket knife for (I don’t, generally) you may find the Clipitool’s utility more restricted than that.

The blade steel is 8Cr13MoV, the standard for entry level-priced knives and probably one of the most written-about steels on the internet. Its primary characteristic is the ease with which it can be sharpened; everything else about it is just enough: just tough enough, just rust-resistant enough, holds an edge for just long enough. I’d take just about any other modern AUS-8-and-up steel over 8Cr13MoV, but that speaks less to its inadequacies than to the embarrassment of riches we have when it comes to good, affordable steels.

The other implement you can fold out of your Clipitool is the distinctly Spyderco bottle opener/screwdriver. It has that distinctly Spyderco pseudo-fugliness to it, but it works really well in both its intended roles as well as in its unofficial capacity as a miniature pry bar. I was worried that the length of the driver arm would make it too fragile to really beat on, but I used it in a pretty careless fashion taking an old computer apart, and it held up well: there was a bit more side-to –side play afterwards, but nothing that tightening the pivot screw wouldn’t fix.

In general, the fit and finish on the Clipitool is what I would describe as pleasingly sloppy. There was a little wiggle in both the blade and the driver arm to begin with, there are some gaps at the butt end of the knife where the springs meet, and most of the edges, with the exception of the outer edge of the handle scales, are sharp, albeit not troublingly so. I find that there’s something reassuring in a knife with some small-scale, non-performance-affecting issues; I’m less afraid to beat on it because that feeling of hallowedness I get from, say, a Taichung, Taiwan Spyderco isn’t present.

The stainless steel scales do attract scratches, though, as you can see in the pictures, so if that bugs you be warned.

I hate finger grooves and ‘ergonomic’ scalloping; the weird curves on the Delica’s handle are the primary reason why I dislike that knife as much as I do. And yet here we are looking at the Clipitool, a knife whose handle is entirely finger grooves, and I really like it. I think the reason why I like the Clipitool’s handle is that it is designed with the overall size of the knife in mind. The Clipitool is so small that, when you’re using it, there’s only one way to hold it, unlike the Delica, which could theoretically be held a few different ways. The grooves keep your hand where it should be to use the knife most effectively, and prevent it from slipping around on the slick steel scales. When you’re using the caplifter/driver, the ergonomics are different, although equally good. The folded-in blade is what your fingers wrap around, not the grooves, and the neck of the driver arm sort of extends the handle, meaning you can actually fit all five fingers on the Clipitool for lifting caps or driving screws, making both tasks easy to perform:

The Clipitool comes with a micro version of what I feel is probably my favorite clip on the market, the standard Spyderco spoon clip. I’ve mentioned before that I’m hard on my knives’ pocket clips, which is why I prefer the spoon clip to the wire clip on my Spydercos. This miniature one is so good: just-right tension and the smoothness of the steel scales makes stowing it away and retrieving it thoughtless, and it is very durable. I don’t know how popular the Clipitool has been overall, but if Spyderco takes anything away from this design I hope it’s the clip: I would love to see it on the Dragonfly 3.

The Clipitool, despite having Clipit in the name, is a Slipit knife – Spyderco parlance for a slipjoint knife (I assume they called it a ClipiTool and not a SlipiTool both to advertise the fact that it has a clip and because Slipitool sounds vaguely dirty). In the official Clipitool literature Spyderco says that the opening hole is meant to function as a nail mark would on a traditional slipjoint knife, facilitating easier two-handed opening, but, as with the Pingo, you can open the Clipitool with one hand, albeit somewhat awkwardly. The driver arm however will always need to be opened with two hands. It feels silly to be talking about the walk and talk of this emphatically non-traditional knife, but since it’s a slipjoint I feel obligated to bring it up (and indeed, the overall shape and two-pivot design remind me a lot of the Case Peanut): it’s decent, probably a half-step up from what I was expecting given the price. The driver arm in particular has a really pleasing snap to it. The pull would probably be about a 4 on the blade, and a 2 or 3 on the driver arm.

Lockup, or maybe slipup in this case, is good. The Clipitool feels a little harder to close than my Peanut or my UKPK, and about on par with the Cadet. The choil precludes virtually any chance of accidental closure. There isn’t a lot to talk about on this point, so suffice it to say that the Clipitool is adequately secure, as you would expect from a Spyderco-designed slipjoint.

Some people remain optimistic about Spyderco, but I find it harder and harder to do so. Knives like the Nirvana or the Mike Draper or the divisive Rubicon strike me as empty displays of virtuosity, undoubtedly good, but overpriced and fundamentally unimaginative; knives from a company at the height of its manufacturing powers but at the nadir of its creativity. The best non-collaboration knives Spyderco released this year were upgrades of existing designs. Because it was a totally new design, and because it seemed so in tune with what drew me to the company in the first place, the Clipitool would be memorable to me even if it were only an interesting failure.

But of course it isn’t a failure: it’s a wonderful tool – I would call it almost genuinely great. I do wish the blade was a bit longer, but I’m not sure how that could be accomplished without making the overall footprint a little too big. I would also like to see it in FRN or G-10, if the price could be kept where it is. The best thing I can say about it is that I’m going to keep it in my pocket for a bit even though I’m done reviewing it. It’s just a pleasing thing to own and use, and I recommend it without hesitation to anybody. 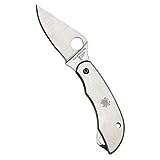 If you would like to buy a Spyderco Clipitool, I recommend purchasing it at Amazon.com or BladeHQ. Thanks for reading.