Last Updated: August 12, 2019
As the standard-bearer for the burgeoning (and almost instantaneously influential) high-end Chinese knife scene, Kizer made an immediate impression with its very high-quality, relatively affordable knives. In what is perhaps a not-very-encouraging indicator of where the knife community’s mindset is at, Kizer immediately fell under harsh scrutiny – a scrutiny that only intensified during the unfortunate business with Tim Britton.

Somehow, though, Kizer came through it, and seem to have earned the respect of knife users, and the attention of other knife companies. I’m not a market analyst, but I think that, since Kizer showed up and started offering a lot of knife at decent prices, prices for high-end knives have, in general, gone down: it’s hard for me to imagine that the lower-than-expected prices of knives like the Spyderco Positron or the Benchmade Valet are total coincidences. The paradigm has shifted.

One of the first Kizer knives to make an impression on me was the Ki3404-a3. Kizer’s initial output, although of indisputably high quality, consisted mainly of huge, over-embellished knives that I wouldn’t have any use for. The 3404, however, was small and spare: a clean, professional, functional design. So I picked one up. When I first got it, I thought it was incredible. My opinion has changed somewhat since then, but I still think that, both as a statement of intent from Kizer and as a tool, the 3404 is worth taking a look at.

The 3404 has a blade length of 3 1/16”, a handle length of 4 1/16”, and an overall length of7”. It weighs 3.1 oz. There isn’t anything bad, or astounding, about those numbers, and I think that this is indicative of the knife as a whole: it’s competent, but also a little rote and unexciting.

I think that saying one type of blade grind is ‘better’ than another is of limited use critically, because so much comes down to execution, but if I did indulge in a rule of thumb regarding grinds it would be that hollow grinds tend to be better slicers. The 3404’s hollow grind is, like the knife itself, clean, professional, adequate: it doesn’t distinguish itself at any particular task but does a solid B+ job with anything you would reasonably use it for.

And speaking of solid B+ performance: the3404’s blade is made of S35VN. S35VN is probably the most balanced of the super steels we commonly see in knives. No freakish chemistry, no single outstanding gimmick, no real compromise other than that it doesn’t excel at any one thing the way that, say, 3V or ZDP-189 do. You just get solid performance in every category. If it is anything besides your first super steel, I suspect you’ll be pleased but not delighted. And, let it be known that, as far as I know or remember, Kizer was the first company to start offering S35VN at the (comparatively) low price points of $90-120.

It’s probably worth making a brief note on the fit and finish: it’s very, very good, and a textbook example of a ‘cool finish’. This is a knife whose high marks in F&F come from precise machining and excellent assembly. The closest comparison I can make is to a Taichung, Taiwan Spyderco, albeit with a little less character – although I think that comes down to the overall blandness of the design rather than Kizer’s manufacturing chops. If I had to complain, I would say that the titanium scales are surprisingly scratch-prone, as you can see in my pictures. It isn’t going to ruin your life

The blandness that I mentioned above, for all that it stops the 3404 from achieving real greatness, also prevents it (mostly, see below) from awfulness as well. You see this most clearly in the handle design. You’ll never think about the 3404’s handle, either disparagingly or appreciatively, for as long as you have it. It works well, but it isn’t going to ring any cherries either.

The handle isn’t totally neutral, there is one finger groove under the fingerguard/flipper (reminiscent of a less roomy Knockout handle), but it’s just fine. The scales are contoured and fairly gently bead-blasted, and offer enough resistance to keep the 3404 from slipping around as you’re using it. There’s also jimping on the thumb ramp and spine and the base of the handle – more than I need, certainly, but it’s well-cut and I have no complaints.

Issues arise with the clip. It’s bad. I don’t subscribe to the “tip-up or bust” school of thought when it comes to my pocket knives, but I do think that any knife that uses a flipper, as the 3404 does, should come configured tip-up. This is because a tip-up configuration puts the flipper tab on the outside of the knife as it sits in your pocket – that is, the side that isn’t against your pocket’s seam. When you have a flipper knife that clips in tip-down, you have to accommodate the tab against the pocket seam, effectively making the knife occupy more space in your pocket than it should. Irksome more than deal-breaking, true, but it does seem like a strictly inferior choice from a design perspective. As an aside: I’ve heard from multiple sources that some 3404s come with the handle milled out for optional tip-up carry. I haven’t seen one myself, and it looks like most of the major retailers are still advertising this as a tip-down knife, but you may luck out.

Orientation aside, the clip itself is bad. The weird looks are enough to drag it from my good graces, but beyond that the flared-out end scrapes paint and catches on things. And while I don’t care about deep carry too much, this clip also leaves a lot of knife exposed. I wouldn’t bring this up if the clip did anything else well, but its universal ineptitude is making me petty.

Generally, I feel like the missed opportunity a bad pocket clip represents isn’t very much in the overall scheme of the knife as a tool, but given the uniform competence you see everywhere else on the 3404, it really stands out. I actually seriously considered taking the thing off, and that’s something that’s never even entered my head before with other bad clips.

There are two broad categories into which a knife’s deployment can fall: smooth or aggressive. Smooth deployments are something like a really well-worked-in Axis Lock, like on my 940-1: thoughtless and graceful. Aggressive deployments are like my really dialed-in CRKT Drifter: kinetic and responsive. Neither is better than the other; both, when done well, can be incredible. The 3404 is an aggressive flipper done well. You definitely need to build up some tension in your finger, but once you do the 3404’s blade comes shooting out. It’s satisfying, and a ton of fun from the fidget factor perspective. I’ll also say that the thumbstuds, vestigial or no, are really good. I could live without them on a flipper this good, but hey, options aren’t a bad thing if they don’t add much weight and work this well.

What works less well is the 3404’s framelock. It still works, but it is very susceptible to any sort of looseness in the pivot – much more so than a liner lock would be (he said, beating a dead horse). And the pivot comes loose on the 3404 fairly quickly – understandably an easily fixable issue, but the frequency with which it loosened reminded me of the lock problem over and over again. And if I have¬ to have a framelock, I want a steel insert; we all know titanium’s tendency to deform over time. A theoretical concern, maybe, but one that would definitely make the pivot issues even more pronounced.

When I first picked up the 3404, I thought it was one of the best deals I’d ever gotten on a knife – and, at the time, I was right. Titanium, flipper, S35VN for $120 was a screaming deal back then. Even today it’s pretty good. As a statement of intent, it’s hard to argue with the 3404. It caused me to keep my eyes on Kizer, and I think they’re really starting to come into their own with knives like the Gemini – not to mention that the bigger manufacturers are offering similarly enticing, high-value high-end knives: things like the Native 5 with S35VN, or the upcoming Mini-Griptilians with 20CV.

In fact, there are so many cool knives around the 3404’s price point today, that, good as it is, it impresses much less than it did a year ago. Although the 3404 does very little wrong from a design standpoint, I also find it quite boring. It’s competent, but not innovative or memorable beyond the price at which it was offered, and now there are better knives for around the same price – some by Kizer themselves.

All that being said, the 3404 is still a good, good knife. If it catches your eye, I heartily recommend it. 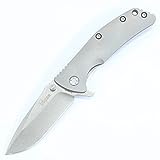 If you are interested in buying a Kizer Ki3404-a3, I recommend purchasing it at Amazon.com or BladeHQ. Thanks for reading.

Editor’s Note: I agree with Ben’s assessment of the 3404. This knife was more exciting a year or so ago than it is now, however, it is still an important knife for Kizer, and at the very least it will serve as a reference point for things to come. On it’s own, it still appears to be a functional and well executed design.