It’s been a long time coming. The Kershaw Bareknuckle is the latest iteration of a knife design that has been churning between sister brands (and rival companies) since Zero Tolerance unveiled the 0777 back in 2011. It’s also something of a new flagship for Kershaw, who haven’t introduced a moderately priced, USA-made, manual action folder since the Skyline hit the market more than a decade ago. Buy the KershawBareknuckle at BladeHQ
Buy on Amazon

I was excited to get my hands on a Bareknuckle. From afar, it looked like a winner: a covetable design, made well, at a competitive price. Does it deliver? Let’s take a look.

The Bareknuckle takes the muscular design of the 0777 and wrings out all the water weight. Its slimmed proportions give the knife a lean, sinewy look: still stylish, just more severe. They also make the Bareknuckle feel neatly compact, especially when closed.
Open, the blade measures 3.6 inches and every bit of it is usable edge. The plunge grind intersects the sharpening choil tidily, and the geometry of the handle allows the edge to stretch almost all the way to the oversized pivot. Compared to the Spyderco Endura (or Pacific Salt pictured below), the Bareknuckle has more usable blade length despite being a half-inch shorter overall. Although the blade shape is unlike anything else I’ve ever used, I came to like it quite a bit. If I had to classify it, I’d go with “modified wharncliffe.” The edge is mostly straight except for a short, slight kink right in the middle. It doesn’t cut with the effortlessly precise tip control of a true wharncliffe, but it also isn’t anywhere near as inconvenient to work with on a plate or cutting board. Thanks to a high flat grind and reasonably thin blade stock, it slices quite well. Overall, it’s a nice compromise for a general-purpose EDC knife, especially if you want a pointy tip that isn’t so delicate you have to baby it. Interestingly, I found the Bareknuckle’s unusual blade shape particularly easy to sharpen. The straightaways at the tip and heel of the blade made it simple to register the edge against a stone, and the belly (always a challenging part for me) was small enough I didn’t even get a chance to struggle. It helps that the steel here, Sandvik’s 14C28N alloy, is a real joy to sharpen. It doesn’t have the brute wear-resistance of a high carbide steel, but it takes a positively crispy edge without much fuss.

KAI have been riffing on this handle design for years now, and I can see why they keep coming back to it. The angular “humpback” in the spine keeps the flipper tab out of the way when closed, and provides a comfortable concavity for the thumb to rest in when open. The finger choil doubles as a cutout to access the sub-frame lock, and stops the knuckles from riding up against the flipper tab. The milled lines in the handle give the smooth anodized aluminum a pleasant tactility, and flow nicely with the facets of the blade. There’s not a millimeter of wasted space anywhere on the Bareknuckle’s handle. It’s so tightly matched to the blade – and the blade has so much edge – that folding the thing up feels like some trick of non-euclidean geometry. In use, I found myself wishing for either a little less blade length or little more handle. The tip feels awkwardly far away in a saber grip, and the way the handle tapers through the palm feels slightly insubstantial, though not uncomfortable. I preferred using it in a pinch grip, which the concave pivot accommodates perfectly.

Pocket clips have always been KAI’s biggest bugbear. They make so many variants I’m sure some of them are fine, but all the clips I’ve experienced from the company were either functional but odd (Leek), mediocre (Cryo, ZT 0801), or good but borrowed from another designer entirely (Strider, Emerson, Hinderer collabs). As for the clip on the Bareknuckle, well, it can be great. Just not the way it comes from the factory. Fresh out the box it had too much spring tension to work predictably without an assist from the other hand holding the pocket taut. Luckily, it’s a dead-simple fix: some careful prying from my Victorinox Bantam’s combo tool and the clip now slides onto my pockets thoughtlessly. The Bareknuckle actually carries quite well – it’s lightweight for its size at just 3.6 ounces and slim enough to tuck out of the way.

The Bareknuckle employs KAI’s sub-frame lock: a heavy-duty lock bar integrated into a lightweight handle. Combining the rigidity of a frame lock with the weight savings of a liner lock is an appealing idea, and the tech is admittedly cool-looking. I just think it’s a bit over-engineered. Other than maybe a marginal increase in strength, I don’t see what advantages a sub-frame lock has over an inset liner lock.

And unfortunately, a sub-frame lock is also susceptible to the same problems as a typical frame lock. Since the lock bar is exposed, it’s easy to unintentionally put pressure on it, pushing the detent ball into its hole and ultimately making the blade harder to deploy. When the Bareknuckle was new the detent was punishingly stiff – there were times I absolutely could not open the knife, especially if my hands were wet or sweaty. Thankfully, after a few weeks it broke in dramatically. The lockbar lost its sensitivity to pressure, and the detent was tempered. Little details here – like the “landing pads” for your finger behind the flipper tab – go a long way towards making the lengthy break-in period more agreeable. Now the action is every bit as crisp, confident, and fast as anything from Zero Tolerance.

I mentioned it once already, but it bears repeating: the Bareknuckle is the first USA-made Kershaw to eschew assisted opening in over a decade. The knife market looks very different than it did ten years ago. Consumer expectations have changed. Chinese startups are jockeying for position against American stalwarts. Social media has given knife enthusiasts a louder voice than ever. The Bareknuckle is undoubtedly a product of these pressures: a manual action ball-bearing flipper, competitively priced, with a famous (among knife nerds, that is) design heritage.

The Bareknuckle is the most appealing iteration of the 0777 yet. If you like the design, you shouldn’t hesitate to buy it; it’s worth the $60-$70 asking price. But as much as I appreciate the knife, I don’t think it’s going to be the one to break Kershaw’s Speedsafe habit – it requires too much patience and practice for a knife novice. For all the griping they elicit from enthusiasts, at least Speedsafe knives don’t ever need to be held a special way to work properly. Still, the Bareknuckle is a good knife, and a leap in the right direction for Kershaw. 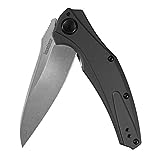 Editor: I recommend purchasing the Kershaw Bareknuckle from Amazon or BladeHQ. Thanks for reading.