Last Updated: December 1, 2019
The Kershaw Leek is a popular EDC knife designed by legendary custom knife maker Ken Onion. Between his designs for Zero Tolerance Knives, Kershaw, and CRKT, Ken’s work has received a lot of attention on this site. This is for good reason as he is highly regarded as a knife designer.

Buy the Kershaw Leek at BladeHQ

The Kershaw Leek is firmly planted in the Every Day Carry (EDC) category. In fact, this is something of a gold standard for EDC. It comes in a great size and is a durable design, perfect for daily carry. Additionally, the Leek has been offered in wide variety of colors and finishes, including some limited edition versions over the years. This makes the Leek a collectable knife. For these reasons the Leek has become a favorite of both hardcore enthusiasts and casual pocketknife users.

The Leek has an overall length of 7″, a 3″ blade, weighs 3 about ounces, and is made in America. Like the vegetable it was named after, this is a sleek and slim design. This lightweight folder is aimed directly at the Every Day Carry (EDC) market.

Here is a size comparison with the Leek in between my Kershaw Skyline and Kershaw Chive:

The Kershaw Leek features a modified wharncliffe style blade. The Leek’s mostly flat edge is almost completely devoid of belly. This makes the knife well suited for tasks that involve the tip of the blade. The Leek’s blade comes to a very fine tip and it makes the knife great for piercing tasks and detail work. Stuff like scoring boxes and clipping coupons is a breeze with a wharncliffe. It’s also easy to sharpen a wharncliffe blade like this relative to a knife with a curved edge. Another advantage of the wharncliffe design is that pressure is applied uniformly to the edge. This allows you to place a good amount of leverage into a cut.

On the flip side, folks may not like the wharncliffe blade because it has no “belly” or forward curvature to the blade. Belly is especially useful when preparing food (think, rocking a kitchen knife back and forth) or skinning game without piercing the hide. And that tip, while very precises, is somewhat fragile. You don’t want to drop any knife, or pry with any knife, but the tip of the Leek is especially delicate.

Another argument against the wharncliffe is that it looks funny. It lacks the traditional elegance of something like the Loveless Drop Point Hunter. This wharncliffe blade may take some getting used to if you come from a traditional hunting knife background, but that’s part of what folks find endearing about Ken Onion’s work.

Here is another size comparison with the Spyderco Endura and the Delica 4:

The Leek is a perennial in Kershaw’s catalog. The design is at least 10 years old, and probably is closer to 20. Accordingly, Kershaw has offered the knife in a number of steels over the years. But if you are going to buy one new one today, it will most likely come in 14C28N.

14C28N is developed by Sandvik, a Swedish company that made the steel exclusively for KAI USA/Kershaw Knives. 14C28N is a high quality stainless steel and is a choice for the price. I have found that 14C28N is a practical steel. It takes a fine edge easily, holds that edge for a decent amount of work, and is easy to sharpen. It also has good stain resistance. I prefer it over 8Cr13MoV and Aus8, the Asian budget steels, as it holds an edge longer. I also like it more than D2, a semi-stainless steel that can be found at similar price point as 14C28N, because 14C28N is easier to sharpen and isn’t as prone to staining.

It’s an excellent all round steel, and is appropriate at this price point.

The handle of the Leek will come in either full stainless steel with a frame lock (shown here) or aluminum scales with a liner lock. Both models feel good in the hand for a smaller knife. The solid steel handled version has a nice heft to it. Both handle types are constructed with screws rather than pins, so if you need to disassemble the knife, then it can easily done with a T6 torx bit.

Fit and finish on this handle is excellent. All the parts line up. The finish work is good with no tooling marks or anything like that. It’s simple design, but Kershaw has it dialed in.

This is a comfortable little knife that is geared towards light to medium use. I found I was able to get a 4 finger grip on the knife without much issue and my thumb found the thumb ramp easily. There is a little bit of jimping on the thumb ramp. The jimping isn’t supper aggressive, but it does grab the skin a little. Otherwise, there isn’t much of a “traction plan” on this knife, so you won’t want to skin a deer with it or take it into the shower, but for a small knife I liked the ergos.

The pocket clip of the Kershaw Leek is pretty good. Ken Onion is known for designing some pretty “out there” pocket clips, but the clip on the Leek is relatively normal looking. It is long, and offers good spring retention. It is reversible for tip up or tip down carry, but it is not ambidextrous.

The clip rides pretty low if you mount it tip down, but for tip up carry a good half inch of the handle sticks out. That said, this is a small and light knife, it still carries well and is unlikely to draw much attention. Here is a shot of the Leek in the pocket:

The Leek is an assisted opening knife, which means you start opening it manually, but then a spring kicks in to flip the blade open the rest of the way. Ken Onion designed the assisted opening system, which Kershaw calls the “SpeedSafe” deployment system. This assisted open technology is robust, and is used on a lot of Kershaw and Zero Tolerance knives. The Leek deploys quickly with a slight amount of pressure on the thumb studs or flipper. The knife opens with a satisfying “snap”, even after thousands of flips. Having owned a number of SpeedSafe knives over the years I can vouch for it’s reliability. It’s a good assisted opening mechanism.

There is a second optional safety lock to keep the knife from opening accidentally. Out of the box, this secondary safety is loose, and will invariably move around when you don’t want it to. Thankfully, this safety can be tightened down, or even removed completely if you decide not to use it.

Additionally, for those that don’t care for the SpeedSafe, it’s possible take the spring out and use this as a non-assisted opening knife. There is a ball bearing detent inside on the lockbar, so the knife still functions de-assisted. But primarily the Leek was designed as an assisted opening knife.

The blade on my knife locks open with a stainless steel frame lock. The lock is solid, and without blade play in any direction. It should be more than adequate for the typical EDC chores you will put this knife up to, like breaking down boxes and opening mail. My Leek has seen substantial use over the years, and the lock still engages early, and securely without blade play. When it’s time to release the lock there is no stick.

Here is a parting size comparison with another EDC classic, the Benchmade Mini Griptilian:

The Kershaw Leek has most of what I look for in a small EDC knife. It’s light, slim, sharp, and fast. I like the solid lockup and quality blade steel. The pocket clip is secure, and the knife feels good in the hand. The fact that this Kershaw is made in the USA certainly does not hurt either. I think the quality is better on Kershaw’s USA made knives than their imported blades.

The biggest potential issues with the Leek are that there is not much texture on the handle, and the tip is thin and can break if you are not careful with the knife. It’s a little “fiddly” and is more of a light duty knife. It will accomplish most typical urban or suburban EDC chores, but if you have harder use in mind I’d look elsewhere. Also, the secondary lock is annoying unless you tighten it down or remove it.

However, for a little EDC blade I think these are minor issues. You just have to keep your intended use in mind. The sleek design makes this something of a gentleman’s folder, and I could see this knife doing just as well in an office as it would in a more demanding environment.

Perhaps the greatest test is the test of time. I originally wrote this review back in 2011. Back then, there were a lot less knife manufacturers and knives to choose from. As I update this review in late 2019, the Leek is still relevant. Kershaw still makes it, and it still sells well. My review sample has held up well over the years. It’s a high quality knife and is designed to last. And at well under $50, the Leek is an affordable USA made option. I’d say it has aged well and passes with flying colors.

Personally, I prefer the Kershaw Skyline over the Leek, but if you like the design then I think you will be pleased with the build quality and practicality of the Leek. Much like the Skyline, this is a modern classic for good reason. Recommended. 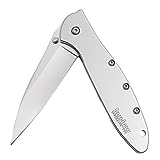 I recommend purchasing the Kershaw Leek at Amazon.com or BladeHQ.Please consider that buying anything through any of the links on this website helps support BladeReviews.com, and keeps the site going. As always, any and all support is greatly appreciated. Thank you very much.