Last Updated: July 28, 2019
Although knife collecting, like any hobby, is a mild form of mania, I like to think that within this gentle madness I am a reasonable man. My uses for my tools are reasonable. My knife preferences are reasonable: I prefer simple handles, simple blades, and I generally like those blades at 3” or less. No one could look at my collection of knives and think me anything but a very reasonable individual – unless their eyes by chance fell on my Cold Steel Large Espada.

How did I end up with such a ludicrous knife? Well, even though most of my purchases come after much consideration, reading, and weighing of pros and cons, every so often I like to impulse-purchase a knife that is out of my comfort zone, just to counterbalance the homogeneity in my collection that my preferences tends to create. But when I ordered the Large Espada late one night, I wasn’t just stepping out of my comfort zone; I was taking a flight to a location on the other side of the planet.

No knife I can think of offhand (outside of some particularly egregious customs) so flamboyantly violates every edict of utility I’ve set for myself over the years like the Large Espada does. But, going beyond that, I don’t think that it’s a practical choice even for the applications for which it was ostensibly designed. The Large Espada is impractical. It is unreasonable.

So this is going to be an odd review: an unreasonable knife reviewed by a reasonable man. But I like to imagine that even the palest, milquetoastiest accountant likes to cut lose once in a while. Sometimes you want to listen to Electric Wizard, not Glenn Gould. Sometimes you want to carry a giant, unwieldy tactical blade instead of a reasonable and non-threatening tool. And when those sometimes strike you, there aren’t many knives I know of that can scratch that itch quite like the Large Espada.

Of course, when you’re dealing with a knife of this size, it doesn’t make sense to get hung up on weight – after all, the 5 ½” blade folding knife isn’t exactly a crowded category, is it? Even very big knives like the Benchmade 710 or some of the Hogue knives aren’t really in the same size class. The only other reasonable competition for the Large Espada is the more affordable, all G-10 Large Espada, which weighs about 1 ½ oz. less. The Large Espada’s blade is a dramatic, theatrical, aggressive clip point. The tip is somewhat strengthened by the swedge, and will pierce material, even thick material, quite easily, but it gives the impression of relative delicacy. The edge is all belly, dipping out right after the ricasso. This, coupled with the (excellent) hollow grind and the wide edge bevel, give the Large Espada considerable cutting ability, at least on the macro level: cardboard, wood, plastic, metal, all can be separated cleanly and easily by this monster.

Cleanly and effortlessly for a while, at least. The steel, AUS 8A, simply wasn’t the right choice here. If you want to use your Large Espada in roles other than self-defense, you’re going to use it for the macro cutting tasks I mentioned above, and when you do, you’ll find that AUS 8A dulls quickly. Editor’s note: in 2015 Cold Steel finally upgraded these to CTS-XHP steel, and then to S35VN. I have had some experience with Cold Steel’s CTS-XHP and their S35VN and both steels have been excellent. S35VN is a meaningful upgrade over AUS-8A. It holds an edge better and is tougher. It’s a better choice all around.

I could deal with poor edge retention if it were the only problem, but, on this blade shape, with this grind, the steel is also fragile. When I first got my Large Espada a couple years ago, I took it out on the patio to cut up some water bottles, cardboard, and boxes of frozen peas (yup), both to test it and to participate in the time-honored tradition of goofing around with a knife (what are the Absolute Proof videos if not footage of people goofing around with knives?). During one cut I happened swing down and hit the balustrade – not hard enough to bite into the wood, even, but when I looked at the blade I saw that it had chipped, in multiple places and quite badly: I’ve sharpened the Large Espada since then, and managed to reduce the chipping a bit, but it’s still visible, and I don’t think I was abusing the knife when it happened. I think it comes down to that wide edge bevel; AUS 8A isn’t tough enough to be run that thin at the edge. I understand that in the self-defense role, such issues are less likely to matter, but I still think that Cold Steel could, and should, have chosen a better blade steel than AUS 8A. Let us not forget that we’re talking about a $130 knife here.

The Large Espada’s handle is comfortable no matter which way you hold it: forward, with your index finger in the choil, or in a pistol grip with the lower scalloping between your middle and ring fingers, reverse grip: it’s all good.

The handle is composed of two parts, almost in the style of a traditional knife: the aluminum ‘bolsters,’ which are integrated with the liners and the sort of grommet at the end of the knife, and the polished G-10 scales or inserts. Everything is decently if not artfully contoured, and all the edges are chamfered. I feel like a good portion of that comfort would be lost on the pure G-10 models: Cold Steel’s traditional unpolished G-10 is famously aggressive, and I don’t like it at all. It ruins your pockets, makes the knife uncomfortable to hold, and, let’s face it, looks a hell of a lot less classy than the original Espada’s set-up. If you’re going to get the Large Espada, get the original set-up. It is very comfortable in hand. In the pocket? Not so much. I can fit the Large Espada into the pocket of my jeans, but just barely, and even though it doesn’t feel as heavy as I was expecting, it sure doesn’t disappear. And this is where I take issue with the Large Espada in its intended role as a self-defense tool: issues of legality aside, it’s almost too big to carry around every day, even as a dedicated tactical blade, to use the Nutfancian term. I know a lot of smart guys who carry multiple blades, but I am a one-knife man, and I don’t have enough pocket space for a second knife of any size, let alone something as elephantine as the Large Espada.

Maybe I’m doing it wrong, though; Tool carries his in in a kydex boot sheath. Might be worth looking into.

More problems arise with the deployment methods on the Large Espada. There are two, although they both utilize the thumb plate on the spine of the blade. The first method is your traditional roll/flick open. Either is difficult to do reliably or quickly because of the size of the Large Espada. Rolling it out requires your thumb to stretch quite a bit, so it isn’t comfortable or fast. Flicking it takes a lot of wrist momentum, as well as careful placement of your thumb on the plate.

The disk is also designed to be wave deployed; that is, you can draw the Large Espada from your pocket in such a manner as to cause the plate to catch on the corner of your pocket, deploying the blade as you pull it out. Wave openers, to me, aren’t handy enough to compensate for the awkward stares and for the accidental half-openings that can occur, but this one is particularly finicky.

In my last review I wrote that every big blade I’ve had has some bladeplay. I guess I have to eat a little crow because that isn’t true: I had forgotten that my Large Espada has none, whatsoever, in any direction. It did when I first got it, but earlier this year I took it apart, cleaned everything, and put it back together a little tighter, and it was totally gone.

The Tri-Ad Lock truly deserves every accolade thrown its way. As ambidextrous as the Axis Lock, but with less moving parts, and tougher than a frame lock, it is a marvel. A weak lock on a knife this big would be an absolute disaster, but with the Tri-Ad Lock in place I have absolute confidence that my Large Espada will only close when I want it to.

So I’ve spent 1,500 hundred words enumerating all the ways in which the Large Espada is an impractical purchase. It’s huge, the steel is iffy, it’s huge, the design is aggressive and off-putting to those around you, the deployment methods are a bit of a pain, and it’s huge. I never carry blades for reasons of self-defense. I don’t think it’s a silly thing to do, but it’s just not something I’m interested in doing. However, even carried as a self-defense knife, I think there are better options out there than the Large Espada; even in that role it is impractical.

But, hey (and turn up the metal for this next bit), sometimes you just want a huge, badass knife. Something for the collection, something that looks rad, is made well, and never fails to make you smile (maybe a little self-consciously), when you take it out to show somebody, thwacking it open and watching their eyes go wide.

I bought the Large Espada on a impulse. It wasn’t cheap. I hardly carry it. I usually only take it out every couple of months, and even then just for a few minutes. I forget that I own it for months at a time. It’s ludicrous. It’s impractical. It’s unreasonable. 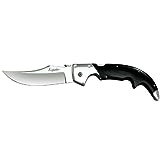 I recommend purchasing the Cold Steel Espada at Amazon or BladeHQ. Please consider that purchasing anything through any of the links on this website helps support BladeReviews.com, and keeps the site going. As always, any and all support is greatly appreciated. Thank you very much.