Last Updated: September 16, 2019
Boker has recently done some great collaborations with custom knife makers (like the previously reviewed Boker Eskelibur). The Boker SubCom is another collaborative effort, this time with designer Chad Los Banos. A native of Hawaii, Chad has done a lot of really cool collaborations with production knife companies and the SubCom is no exception. Buy the Boker Subcom at BladeHQ

In fact, the Subcom has proven so popular that it has spawned a number of variations, including fixed blade versions, rescue versions and several other blade shapes and finishes (including the sweet special edition Subcom Titan that is also pictured – a titanium handled version w/ a 440C blade). I liked the idea of the Subcom Titan so much that I picked up both version of my review. I’ll be comparing the two models throughout both this written review and the video.

As far as uses for this knife go, the SubCom can fill a variety of needs. I often see the SubCom advertised as a “money clip knife” and I have also read accounts of people carrying this knife as a defensive tool (as a last ditch “cats claw” type knife for when the S really HTF). Personally, I think it is best suited as a backup knife. The Subcom is very easy to conceal and it has a look that is very non-threatening which is great for using around people so it could also be a good option for EDC.

The SubCom has an overall length of 4 1/2″ a blade length of 1 7/8″ and a weight of 2.5 ounces (2.3 ounces for the Subcom Titan). Honestly, 2.5 ounces seems a bit hefty for a sub 2″ blade, but when you figure that this knife has a stainless steel frame lock (and a full steel liner) it starts to make sense.

The blade is an interesting drop point shape. The 2mm thick blade steel and the high hollow grind make this knife perform a lot like a razor, and the deep belly gives you a lot of utility when you consider the overall length of the blade. The tip is fairly stout and isn’t designed to maximize penetration. I like this blade shape because it packs plenty of utility and offers the cutting performance of a slightly larger knife. Boker selected AUS8 for the Subcom’s blade steel and 440C for the Subcom Titan it’s a decent selection. If I had a choice I prefer 440C slightly over AUS8, but really both are decent mid range steels and are nice to see when you consider the overall price of the knives.

The handle on the regular SubCom is a FRN scale over a stainless steel liner. For the SubCom Titan you have a titanium scale with no liner. Both knives have a stainless steel framelock on the opposite side. Everything is screwed together on both knives and they both feature pillar construction. Ergonomics on the Subcom are decent – not outstanding. First of all, you are only going to get a 3 finger grip on that knife. Given the size, that is fine and the Subcom actually fills the hand pretty well given how wide the handle is. Also, there is also a ton of jimping on this knife. Jimping on the thumb ramp and finger choil provide for extra traction where you need it, but I found the jimping on the butt of the handle to be a little overkill. The extra jimping and the sharp corners of the knife are uncomfortable under any kind of vigorous use, and I would not recommend the knife for extended cutting tasks. Truth be told, if you are looking for a small knife with excellent ergonomics, I suggest the Spyderco Dragonfly. The pocket clip is large and is almost centered in the handle. It has good retention and rides low. The clip is reversible for tip up or tip down carry, but it is not ambidextrous. As far as carry goes, this is a very slim and light knife, and I found it carried really well with the supplied pocket clip. The nice thing with a knife like this is that it is small enough so that it could double as a money clip, or you could remove the clip entirely and just slip the knife into a bag or pocket.

Also, as you probably noticed in the pictures, there is a lanyard hole. I think a lanyard is a great idea for this knife – especially if you are going to throw it in a bag or pocket.

The SubCom has some half-moon shaped thumb studs which look good and allow you to get some good leverage on the blade. That said, they are plastic and are kinda cheap. I’ve heard reports of them breaking off because apparently they are glued together. I would prefer something that screws together (like the metal thumbstuds on the Boker Subcom Titan). The good news is that if they do break off you are left with a decent sized hole which is perfect for your fingernail and still allows for easy deployment – kind of like a mini spyder-hole. As far as speed goes, I was never able to master the deployment on either of my SubComs. I know some people can really flick these out, but I’m not one of those people. I think there is a bit of a sweet spot with these special thumb studs. I guess I lack the dexterity to really make the most of them. Actual deployment was fairly smooth.

Both the Subcom and the Titan use a stainless steel framelock. Lockup is early and tight. It should be more than adequate for EDC and light utility tasks.

The Boker SubCom is a polarizing knife. Some people love it, others could easily live without it. In my opinion it is going to depend a lot of what you want to use the knife for. To me this would never work as a main EDC knife. The ergonomics don’t don’t support extended cutting. For a small EDC knife, I really suggest a Dragonfly.

But if you are looking for a light use knife, a backup knife, or perhaps a money clip knife, then I think the SubCom is worth considering. It is an interesting design, and it’s fine if you need something for light duty.

If I had to chose between the SubCom and the Subcom Titan I would absolutely go for the titanium version. It’s only a few dollars more and you get a much lighter knife with metal thumb studs. In my mind, those upgrades are well worth the slight premium in price. 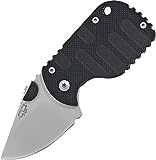 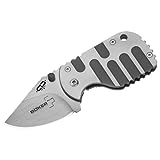 I recommend purchasing the Boker SubCom at Amazon.com or BladeHQ. Thanks for reading.