A while back, I wrote a review of the Work Sharp Ken Onion Edition electric sharpener. I was very impressed with the performance of WKSTS-KO, even after much reservation. What really drew my attention to the Ken Onion Edition, however, were the additional features and upgrades available for that system, in particular the Blade Grinding Attachment. As a recent student of forging and knife-making, I was fascinated with the idea of a compact, portable sharpening system that functioned in a manner similar to the large-scale knife grinders used in custom knife shops. It only made sense that I should investigate the full potential of this system and write this follow-up review. The Blade Grinding Attachment is quick and easy to install on the Ken Onion Edition by simply aligning the chassis to the keyed “on/off” position with the power platform and then rotating into the “sharpening position.” Install the hub fastener onto the drive shaft by turning it in a counter-clockwise direction and the unit is ready for set up based on the desired task and sharpening angle.

To set up the tool, begin by selecting either a long or short distance center location for the adjustable pulley based on your personal preference. These center locations change the distance between the two pulleys where sharpening is conducted. The short center is intended for straight blades and produces a flatter grind, and the long center is intended for curved blades and produces a more convex grind. The change in the grind is a result of the amount of slack in the belt between the pulleys. I like a convex edge for most applications, so I just keep the pulleys set at the long center location. Next, set the tensioner into the locked position and select the desired sharpening angle by moving the angle adjustment lever to align the angle indicator with the proper angle setting. Tighten the angle selection clamp knob to secure the angle. Choose and mount an abrasive belt based on the task at hand. (The user’s guide gives a detailed breakdown of each belt grit and their uses, which range from blade repair and grinding to stropping.) The belt is easily installed by placing it around the hub fastener, pulleys, and tensioner. The tensioner is released once the belt is in place. Prior to sharpening, check to ensure the belt is tracking properly. The belt should be centered on the pulleys as it rotates. To test the belt, turn the power on to medium speed and press the switch lockout button and adjust the tracking knob until the belt is in the proper location. Now you are ready to begin sharpening. Use the reference plate to establish your 90° baseline by placing the spine of the blade flat onto the plate. Keeping the blade at that 90 degrees, move it up to the belt surface between the two pulleys. Place the heel of the blade edge onto the belt surface using very light pressure (the belt should only deflect about 1/16th of inch). Move the blade across the abrasive belt at a rate of 1 inch per second, following the contour of the blade, until the tip reaches the middle of the belt. Pull the blade away and repeat the process until you have raised a burr along the entire edge, counting the strokes as you go. Flip the blade around and perform the same number of strokes on the opposite side. Continue up the grit scale until your desired sharpness has been achieved. After running several cheap blades through the Blade Grinding Attachment, and getting a good feel for the operation of the system, I decided I would really put the “grinding” function of the attachment to the test. I pulled out my Steel Will Censor 1310, which has a spear point with a false edge on top. I’m a big fan of double-edge knives and always wished my 1310 had a top edge.

I installed the extra coarse P120 grit belt on the belt grinder and went to work. After several minutes of grinding, shaping, sharpening, honing, and stropping with the various belts, I had the double-edged Censor I always wanted, with a top edge that looked like it came from the factory. The blade grinding attachment did its job well beyond my expectations.

A couple of sharpening tips for using the Blade Grinding Attachment that I learned through my own experience:

I was pleasantly pleased with the Ken Onion Edition, as expressed in my review of that unit, but after using the Blade Grinding Attachment, I am sold on this sharpening system. I love the amount of control I have over my sharpening and the consistent convex edge I am able to produce on everything from kitchen knives to machetes. This attachment turns a good sharpening system into a phenomenal one. Knife makers and knife enthusiasts will love the Ken Onion Edition with the Blade Grinding Attachment. In fact, I recently recommended this system to a large custom knife shop looking for a precision sharpener for finishing their blades.

If you are looking for the most versatile, user-friendly sharpening system on the planet, I believe the Work Sharp Ken Onion Edition with Blade Grinding Attachment is what you are looking for. Now if you will excuse me, I need to find some more sharp objects to sharpen. 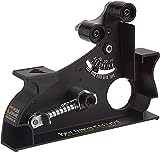 If you are considering buying a Work Sharp Blade Grinding Attachment, I recommend purchasing it at Amazon or BladeHQ. By purchasing things through any of the links on this website you support BladeReviews.com, and help produce future reviews. Thank you very much.