2016 is shaping up to be a damn fine year for gear geeks. I think this began when Benchmade unveiled a shake-up in their Griptilian line, offering an upgraded steel (from 154cm to 20CV) and handle material (from nylon to G10). This was something Benchmade fans had long been begging for; so much so that a market for replacement handles for the Griptilian emerged. It seems that Benchmade finally realized how much money they were leaving on the table and acted accordingly.

For a long time, it seemed that Victorinox was in the same position. Despite how wildly popular their Alox line is among gear aficionados, the number of Alox tools rarely (if ever) increases. Much like with custom handles for the Benchmade Griptilian, a small industry has grown around the concept of modifying stock Swiss Army Knives. If you can imagine a combination of tools, handle materials, and other perks, it can be made, assuming you can afford it. One of the most popular modifications is the addition of scissors and a pocket clip to the Victorinox Pioneer, but even that costs nearly $200.

I had honestly resigned myself to saving up for one of these custom Pioneers, as I was convinced Victorinox would never remedy the situation. While scissors aren’t technically necessary on a multitool that already has a knife blade, they are quite handy; especially in places where a knife isn’t kosher. Likewise, a pocket clip (while not necessary) would be a big improvement. Thus, I set the idea aside until I could actually afford it.

By that, I mean I set the idea aside for a week or two, because it turns out Victorinox was listening. Take a gander at the Victorinox Pioneer X.

Granted, that’s only half of the changes I wanted. But if I had to pick, it’d be the change I’d like to see first. The scissors add a function that many have been wanting to see for some time, and there are workarounds to the lack of a pocket clip. Most of the comments from my review of the Pioneer and the Electrician will hold true here, although I should note that because of the extra layer, the Pioneer X won’t carry quite as well. Still, this will be the go-to Swiss Army Knife for many gear geeks going forward, and for good reason. I’ll be purchasing one, and I urge anyone in the market for a multitool to do the same. Who knows? If this sells well enough, maybe Victorinox will expand the Alox line.

UPDATE:I’ve since purchased a Pioneer X. To say that I underestimated how much I would love this knife would itself be an understatement. It kicked most other knives out of my pocket for about a month, and even now I end up carrying it every other day. The value added by the scissors is hard to quantify. I use them about half as often as I use the knife blade itself. That may not sound like much, but somehow this combination of tools handles 99% of the tasks I run into any given day. I will say that my one concern (that it would be difficult to carry) has turned out to be true. It’s not considerably harder to carry than a normal Pioneer or an Electrician, but I do have to juggle things around in my pocket more than I’d like. My work pants have a pocket that is perfectly sized for the Pioneer X, but normal clothing requires a bit of Tetris to make it ride comfortably.

But I love Tetris, so buy this knife even if you have small pockets. It’s even cheaper nowadays. 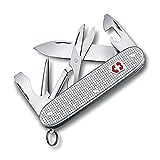 If you would like to buy a Victorninox Pioneer X, I recommend purchasing it at Amazon or BladeHQ. Please consider that buying anything through any of the links on this website helps support BladeReviews.com, and keeps the site going. As always, any and all support is greatly appreciated. Thank you very much.