They say less is more. That is, until, less becomes less. That is the question with the [U2, an ultra minimalist blade from Fallkniven. The U2 is about as simple of a knife as you could ask for. A slim, refined folding lockback with plain black handles, a gleaming laminated blade, and just enough hardware to hold it all together.

Buy the Fallkniven U2 at BladeHQ

I’m no stranger to Fallkniven’s minimalist approach. I have found it works wonderfully in the context of a fixed blade and I have enjoyed their A1 and F1 tremendously. So the time has finally come to examine this little U2, which is arguably the brand’s most popular folding knife, and is marketed as the first folding knife with a Super Gold Powder Steel (SGPS) blade.

The U2 has an overall length of 5.9″, a 2.52″ blade, weighs 1.5 ounces, and is made in Japan. This knife is made for Fallkniven by Moki. There really is not much to this knife. Oddly enough, when the U2 first arrived I was most surprised with how small the box was. It was not much more than a matchbox. Needless to say, but the U2 is extremely lightweight and eminently pocketable.

The blade of the U2 is a simple drop point with full flat grind. There is no swedge or distinguishing feature, save for the ambidextrous nail nicks, laser etched Fallkniven logo, and demarcation between the steels of this laminated blade. This is about as simple as it gets. The tip is capable enough for household chores and there is a slight belly to the blade.

Fallkniven selected a laminated blade with VG10 cladding, and a Super Gold Powder Steel (SGPS) core. I discussed this steel a little in my review of the F1, but this is my first experience with it. On paper SGPS is a very interesting steel. It is heat treated to 62 HRc, and is sold at a serious premium on the F1 series.

In practice my initial reaction to the cutting ability of the U2 was underwhelming. This is a thin and sharp blade out of the box. I expected laser like performance on cardboard, but my knife was hanging up on something when I tried to cut with it. Don’t get me wrong, it cut, but it wasn’t the silky smooth performance I was expecting from a knife like this. In performing a little research for the review I realized that I was not alone, and the knife benefited greatly from a re-profiling. I’m no expert at re-profiling, but I first attempted to “relieve the edge” a little with the 30 degree feature of my Sharpmaker. That didn’t give me the result I was after, and I ended up running it on the diamond stones of DMT Aligner. Now the U2 responds a lot better to cardboard, paper, and other fine slicing tasks. The blade stock is very thin, and so is the grind, but for whatever reason I needed to spend some time tweaking the edge before I could realize the knife’s full potential.

I found edge retention to be merely “OK”. I’d say it was a step up over VG10 and AUS8, but not leaps and bounds ahead. When it came time to touch up the edge on the rods of my Sharpmaker, it came back without a ton of work. I would place this steel above VG10, but I would not put it on the same level as ZDP-189 (at least in terms of edge retention). I had zero issues with corrosion resistance.

The handle of the U2 is injection molded Zytel, a high density plastic resin. It is lightweight, strong, and functional. However, fans of more substantial knives (including those that dislike the “plasticy” feel of the handles on the Griptilian) will likely not be a fan of the U2’s handle. Personally, I don’t mind the plastic feel of the handles. I have owned a number of zytel handled knives in the past, and have never had a problem.

However, this is one aspect of the knife that is tough for me to describe, and I don’t think pictures do a great job conveying the feel of the handle either. I will say the handle is nicely finished. The edges (save the inside edges) are nicely chamfered. There is as generous lanyard hole, and the pivot screw and single rivet give the knife a clean appearance. The handle of the U2 is just big enough for me to get a full 4 finger grip on. Any smaller and this would become a 3-finger knife. I take an XL glove, so this handle should work for most people. There is no jimping to speak of on this knife. Not a bad thing if you ask me. The inside edges of the handle are a little sharp, but I otherwise found the U2 to be comfortable. The handle itself has a light texture to it. This isn’t a high traction handle, but it’s fine for normal tasks.

The U2 doesn’t have a pocket clip. The nice thing about the plastic handle, is that I have absolutely no reservations in dropping this knife into my pocket with my keys, loose change, etc. It wears well and I have zero concerns of marring the finish. At 1.5 ounces it is like carrying an Alox Cadet. You don’t notice the knife until you need it. The U2 is equipped with dual nail nicks. These are generous nicks and they make it easy to open the knife. It is possible to open the knife one handed with a little finger gymnastics, but this was designed to be a 2 hand opener. At any rate, I have no issue with the nail nicks, but I did have an issue with the gritty and noisy pivot. I thought that was strange. I couldn’t see if there were washers inside the handle, so I ended up disassembling the knife and found that there were no washers. It’s metal on plastic.

I don’t need each knife in my drawer to be “Sebenza Smooth” but even my $20 Swiss army knife is smoother than the U2. For me that is a bummer and is one of my least favorite aspects of the knife. Bronze or even teflon washers would be welcome here like WD-40 on the hinge of a squeaky door. For lockup we have a tried and true lockback mechanism here. The lock on the U2 is sturdy, although this isn’t a knife that I am going to start prying with. The blade snaps crisply in place, is free of play, and disengages with a press of the thumb. The lockback is perfectly fine for this kind of knife. I will say that the tang of the blade and the backspring of the lock do not have a particularly good transition. There is a noticeable “jump” between the 2 pieces of metal. Not a big deal for a user knife, but this is something I usually notice on a slip joint or lockback folder.

My blade is just a touch off center. Nothing rubs.

Frankly I am a little torn with the U2. Having had good results with Fallkniven’s fixed blade knives I was excited about finally acquiring the U2. It has generally received good feedback from Amazon and several other reviewers I respect, and I have been enjoying traditional knives and gentleman’s folders. So I thought I would really take to this one.

While I appreciate the practicality of it, I was disappointed by some aspects of the finish work of the knife. The edge required a good amount of tweaking to cut the way I wanted it to, I wasn’t blown away by the Super Gold Powder Steel, and the pivot and action of the knife is gritty thanks to the washer-less design.

For my money, I would recommend either the Spyderco Dragonfly, Pingo or the Victorinox Cadet before the U2. I honestly like them more than this knife, and they are all significantly less expensive. 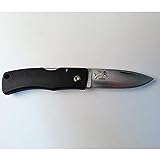 With that said, if you are in the market to buy a U2, I recommend purchasing it at Amazon or BladeHQ. Please consider that buying anything through any of the links on this website helps support BladeReviews.com, and keeps the site going. As always, any and all support is greatly appreciated. Thank you very much.