The Centofante 3 is one of Spyderco’s most long-lived designs. Introduced in 2004 and unchanged to this day, it’s been around long enough to witness most of the rest of Spyderco’s lineup either evolve or go extinct. I think the reason why is simple: the Centofante still looks good. Buy the Spyderco Centofante 3 at BladeHQ

Even a diehard Spyderco fan will admit that the company’s design language can be… polarizing. The Centofante achieves broader appeal by standing apart from the typical Spyderco style: no bulging blade, no forward finger choil, no full-flat grind. It’s slim, simple, yet dramatic. If not for the round hole and the silver bug in the handle, it could easily pass as a knife from another brand.

I’ve long been tempted to pick one up for myself, but skepticism of its old-fashioned pinned construction always held me back. Until now. So, is the Spyderco Centofante 3 really as timeless as it looks?

The blade on the Centofante is just shy of three and a quarter inches long. Thanks to a tiny ricasso and the absence of a finger choil, it has almost the same amount of usable edge as the significantly larger Paramilitary 2. Despite all the edge, the blade still feels petite – no doubt due to its exceptionally thin blade stock. It’s the Centofante’s most noteworthy spec: at 1.95mm thick (according to my calipers), it’s easily the longest, thinnest folding blade in Spyderco’s entire catalog, if not the knife market at large. The only knives I own with thinner blades are either keychain-sized novelties or flexible kitchen knives. The Centofante makes the Delica’s blade stock look generous in comparison, and the Para 3’s, outrageous. A hollow grind was definitely the right choice here. As much as I appreciate Spyderco’s full-flat grinds, they necessarily get quite thin towards the tip. The steady hollow grind on the Centofante has no such distal taper, preventing this sliver of a blade from being drawn too thin. There’s no flex, and the tip is narrow but not delicate. While I would never recommend prying with it, the blade seems better equipped for the task than, say, a full-flat ground Delica, since it’s supported by full thickness blade stock almost all the way to the tip.

My Centofante didn’t arrive as sticky sharp as I have come to expect from Seki City, Japan Spydercos. Thankfully, the neatly applied factory edge and sharpening choil made it easy enough to touch up. As you might expect with a knife this thin, it cuts quite well. It doesn’t have the shearing power of a broad, flat ground blade, but it’s much more agile – able to twist quickly mid-cut without much resistance. Whether it’s a drop point or a spearpoint, the blade shape just works: a stretch of flat edge, a gentle belly, and a focused tip. The blade steel is VG-10, a time-tested alloy with excellent corrosion resistance and decent edge retention. While today’s best powder metallurgy concoctions outclass it in one way or another, I don’t really miss them here. The more knives I use, the more I appreciate well-balanced steels; especially ones that deliver good value like VG-10. Also, on a knife that can’t be taken apart for cleaning, VG-10’s stainlessness is a major asset.

At a glance, the handle of the Centofante looks like anodized aluminum. If it was cool to the touch, it would feel like it, too. It’s actually plastic (fiberglass reinforced nylon, to be specific) with a similarly smooth, light texture. The silver bug and “speed lines” molded into the handle seemed a bit odd at first, but they grew on me: they give an otherwise plain knife some personality without being ostentatious. The Centofante is exceedingly comfortable in hand. The four and a half inch handle is lightweight, nimble, and well-sized for the blade. Its ergonomic features are subtle. No finger grooves or jutting guards, just gentle curves that suggest – not demand – how to hold it. I especially like how it bows down into the palm: it helps the skinny handle feel more substantial, and keeps the angle of the blade better aligned with the arm. If you’ve ever used a Spyderco Military, the Centofante will feel weirdly similar. Despite the size difference, the knives share the same sloping ergonomic geometry. The pocket clip is highly functional, doubly so because the handles are smooth. It comes from the factory configured for tip-down carry. I’m no tip-up evangelist, but after carrying it tip-down for a few days it was obvious the factory got it wrong. The exposed tang, pointy thumb ramp, and aggressive jimping on the blade snag everything in their path. Front pocket, back pocket; didn’t matter – retrieving a tip-down Centofante from any pocket was awkward and unpleasant, as was reaching past it. Luckily, flipping the clip to tip-up instantly and entirely solved the problem. The real snag with the Centofante – well, the one you can’t fix with a screwdriver – is the handle’s pinned construction. I understand why it’s a deal-breaker for some people, especially the tinkerers who like to modify their knives and those who need something 100% rust proof. Given the choice, I’d take threaded fasteners over pins myself.

Nevertheless, my experience with the Centofante was completely undiminished by the way it was put together. Honestly, I was fishing for a problem and still couldn’t find one. We knife nerds can get swept up in hypotheticals. What if the pivot comes loose? What happens if the knife gets filled with sand? In reality, most of the projected problems with pinned construction have simple solutions – just not the same ones as a knife held together with screws. The pivot came perfectly set from the factory, and, being incapable of twisting itself loose, it has stayed that way. When I got sharpening stone slurry all over the knife, I cleaned it with soap and hot water, followed by a squirt of penetrating oil. Basically, I used the Centofante with impunity and it’s only gotten better. So, why worry?

A back lock secures the Centofante open. Like many old-school back locks, there’s a touch of vertical flex in the lockup – not enough to hear or see, just enough to feel when bearing down into a cut. Spyderco’s newer back locks have stamped out this endemic blade play with tight manufacturing tolerances and refinements to lock geometry. It would be nice to see those improvements carried over to older designs like the Centofante, but since it doesn’t affect the lock’s strength or security, I didn’t let it bother me. The blade has a springy self-close, and once broken in it was easy to thumb or spydie-flick open. There’s enough ricasso to allow for one-handed closing, so long as you’re mindful of where your fingers are on the handle.

This is a chimera of a knife. It’s almost as if it was built to satisfy a bunch of contradictory design objectives all at the same time. A strong grind on a delicate blade. An upper class look for a middle class price. Traditional construction on a modern folder. Somehow, the Centofante manages to hit those opposing targets simultaneously instead of splitting the difference and missing them altogether – if the late Frank Centofante was a bowler instead of a knifemaker, the Spyderco Centofante would be a 7-10 split conversion. Ironically, the contradictions that make the Centofante unappealing to knife enthusiasts are probably the exact reasons for the Centofante’s long-term success. It’s not a niche knife. It’s a classy, charming, low-maintenance workhorse of a blade that belies its price point. For me, that makes the Spyderco Centofante 3 the consummate gift knife: handsome enough to appeal to anyone, and uncomplicated enough to work for someone who’s never even heard of a “torx bit.” No instructions necessary, no setup required (well, maybe you should go ahead and flip the pocket clip before wrapping it up). Give one to someone who appreciates nice things but knows nothing about knives, or someone who appreciates knives but knows nothing about nice things. 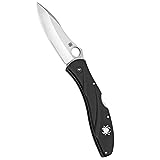 I recommend purchasing the Spyderco Centofante 3 at Amazon or BladeHQ. Thanks for checking out my review.