Last Updated: September 7, 2019
I chose the Streamlight Microstream for my first flashlight review because I felt like it would establish a good ‘control’ for whatever I decided to review next. It was simple, straightforward, unadorned: an appealingly plain little light. But I also chose it because it wasn’t an enthusiast product, in the sense that something like the Prometheus QR and the Peak Eiger are enthusiast products. These are designed for people who want to read the spec sheets, who know the names, pros, and cons of different emitters like knife guys know the quirks of different steels. In the gear world, there tends to be a pretty clear distinction between what’s made for the enthusiast, and what’s made for the everyman.

There are a handful of pieces of gear that I feel represent this comingling of enthusiast and everyman sensibilities: crossover designs, if you will. In the knife world, the Kershaw Leek is the premier crossover design. In the world of flashlights, we have the 47s Preon 2. This is a light designed by enthusiasts, but seemingly geared towards an everyman user. As such it seems like a logical next step after the Microstream. The question is, is it a step worth taking?

The Preon 2 is in a different size class than the Microstream. It is almost exactly 5” long, and about 1/2” across at its widest point. With batteries in, it weighs 1.8 oz. with the batteries in. It’s a 2xAAA light. The Preon 2 is a pen light. The pen light is a proven, recognizable shape. People like it. I can see the appeal, but find it less appealing than the compact, 1xAAA format of the Microstream – or, for that matter, the Preon 1. As a gear enthusiast, I carry a lot of stuff in my pockets: a knife, a pen, a flashlight, a phone, maybe a notebook. If all I carried was a flashlight, I wouldn’t really care. But because I carry it along with so much else, I notice the size and do not appreciate it – and, as we’ll discuss below, the extra length doesn’t really offer any particular performance benefits. The Preon 2 is made of type-III hard anodized aluminum. Not particularly original, but everything is put together tightly and well. This is Dan’s personal Preon 2. He’s had it for a while, and while there is some wear around the bevel and the clip, I feel safe saying that the anodization seems to be holding up better than the quickly-flaky job on my Microstream. The batteries rattle a little in the body tube but other than that the fit and finish is above-average. The Preon 2’s washer-style clip is good. Not great: to my eye it looks a little goofy and it’s definitely too short for the length of the light. It does seem a little thin, and I would worry about bending it out of shape over time, but that’s all theorizing: in the moment, it is adequate if not excellent.

Here’s where the Preon 2 reveals its enthusiast design elements, with much higher outputs, way better runtimes, and a much more cerebral UI than the, er, streamlined Microstream. The Preon 2 is a clicky, my favorite UI by a country mile. It has three basic modes: a moonlight low at 2 lumens, a medium of 22 lumens, and a high of 160 lumens, accessed in that order. It runs at moonlight for 23 hours, 6 hours at medium, and .8 hours at high. My review sample is a first generation model. The second generation has a different emitter and higher outputs. There is a third generation out now that makes more significant changes, but I’ll discuss that below.

Let’s talk about the good stuff first: I like the output options a lot. 47s made a name for itself with its moonlight lows: they give you enough light to navigate, say, a dark room, but won’t affect your night vision. This is my first experience with a 47s product and that low low is really nice to have. The medium and high are nice too. For close- and medium-range tasks there isn’t much difference between them, but I could see the high being useful over long distances or outdoors. The beam pattern is also significantly better than the Microstream’s: less artifacting, a cleaner, even color – a different league altogether. For some reason, I found it easy to accidentally flip into the hidden modes when I didn’t want to; it occurred multiple times during regular use of the flashlight. I guess it isn’t a big deal, and generally options are good, but in this case I’d simply prefer not to have them. It reminded me of one of those pens you see with like three different colors of ink and a pencil tip all in one barrel: it’s just an level of geekery I’m not interested in in my tools, and it adds fiddliness to something that should be intuitive in its simple role.

The Preon 2 is comfortable in hand. Not too thin, not too thick, the clip doesn’t get in the way – all good news. It is, however, slick. Really slick. Like, there are very few knives or flashlights that I worry will slip out of my hands, but the Preon 2 is one of them. Everything is smooth; even the angles near the emitter and the clicky are soft, offering no purchase. If the anodizing was just a little rougher, like what we have on the Microstream, the problem would be fixed. I’ve already discussed the issues I have with the pen light form factor in general, but here I’ll add that the slickness of the Preon 2, combined with the shortness of the clip, cause it to slide around a lot in my pocket, which I don’t appreciate. Is this, in the grand scheme of things, a big deal? Of course not. But over time these little issues build up and cohere into something more irritating than its constituent parts. Particularly when you consider how right the Microstream got its carry, it’s hard not to feel a little disappointed here.

I find the Preon 2, with its enthusiast design cues and everyman price and purpose, to be an interesting light. You get a good selection of outputs, a big boy emitter, and even some geeky hidden mode stuff all for about $40 – more than twice the price of the Microstream, it’s true, but still not exorbitant.

As it stands, though, the myriad little issues I have with the Preon 2 add up, and I don’t think I would recommend it over the Microstream for most purposes. The low and high modes are awesome but not strictly necessary, and the ergonomics are objectively worse. There’s a lot to like about the Preon 2, but they don’t add up to something I like more than other, cheaper everyman options, or slightly-pricier enthusiast offerings.

But here’s the thing: the Preon 2 I reviewed was the first generation. Big changes came with the newest Preon: even better outputs, with an option to configure it in such a way as to hide the hidden modes, a way better clip, and a textured body to help with grip – these changes address every issue I had with the Preon 2 apart from its pen light size, which I’m not penalizing it for unconditionally because that is a personal preference (and the Preon 1 exists for those who want the 1xAAA format). This new Preon 2 goes for $50 and looks pretty great. I haven’t handled one so I can’t say it’s worth it for sure but, if you’re interested in this light, this is the version to get. 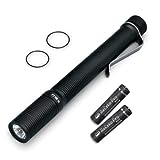 You can get the second and third generations of the Preon 2 through Amazon.com. Thanks for reading.

Editor’s Note: As Ben mentioned, this is my personal Preon 2. I have carried it for years now and greatly enjoy this flashlight. A couple years ago I swapped the Preon 2 out for an even smaller light (the Foursevens Mini ML), but the light was so small I ended up misplacing it and going back the P2. So while I may prefer a smaller light, there is something to be said for this form factor.