Last Updated: August 3, 2019
It’s been my experience that the deeper my understanding of something goes, the less things of that something I like. To use my perennial dead horse as an example, years ago when I first started carrying and using knives, I thought the Delica was wonderful. However, over time as I filled my head with more and more minutiae about knives, and as my opinions about design and use became more developed, the Delica fell further and further in my esteem. As our taste gets better, it gets more and more specific (non-enthusiasts call this phenomenon ‘snobbery’). I’ve always considered myself a passionate layman when it comes to flashlights. They’re a very useful part of an EDC setup, something that I don’t like to go without, but my taste in flashlights hasn’t reached the rarefied air that my knife-sense has. Whereas with knives I’ve gone from “Does it cut?” to “Does it cut well?,” when I’m looking at flashlights I’m still just asking “Does it light up?”

So you’ll have to take my recommendation of the Streamlight Microstream with the proverbial grain of salt. And I do recommend it. Although it has been around for years with little real evolution, and although even a mediocre enthusiast flashlight smokes it in most categories, for what it is – and, to be fair, for what it costs – the Microstream is a perfectly adequate and charming little light.

Whatever its other faults, the Microstream is just about the ideal size, for me, for EDC. It’s about 3 7/16” long, and, at its widest point, is about half an inch across. Streamlight lists the weight with battery as 1.04 oz., although by my scale I was getting 1.3 oz. or so – not a world-shattering difference by any means. It takes one AAA battery.

The Microstream has a by-the-books Type II anodization job. It looks clean and consistent out of the box, but in the testing period for my Microstream it started to show wear quickly. Nothing egregious, just a scratch here and there, but quicker than my Peak Eiger began to show wear. Less conventional is the Microstream’s clip. First, it is a friction-fit clip. Folks tend not to like friction-fit clips because they can get loose or knocked off during carry. I can tell you that the clip on my Microstream is extremely snug – so snug, in fact, that for a long time I thought it was actually part of the body and just looked like a friction-fit clip. The clip itself is made of a fairly thin leaf of spring steel, folded twice over to create an S shape, so that you can clip it either to your pocket as you would a knife, or to the brim of a hat or something for hands-free operation. I’ve never used this feature, but it is unobtrusive, and I like to think that extra fold of steel gives the clip some added durability.

Beyond these specifics, the fit and finish of the Microstream is more than adequate: the emitter is centered, the lens is free from blemishes, and the threads come apart and together without any dramatics.

It is in the fields of output and runtime that we really see the difference between the Microstream and current, higher-priced enthusiast products.

The Microstream has an out-the-front output of 28 lumens. The Foursevens Preon 2 can throw out 84, the Olight i3 gives you 80, the L3 Illumination L10C; the recently-released Olight S1 Baton goes all the way up to 500 lumens. The Microstream is totally obliterated by its competition in terms of output, but beyond that it also doesn’t have different modes like most lights today: it’s either on at 28 or it’s off. Runtime is equally underwhelming at 2.25 hours. This wasn’t blowing wind up anybody’s skirt five years ago, and time has only increased the gap between the Microstream and its competition.

I’m going to say something, and I’m going to risk sounding reductive when I say it, but: 28 lumens is plenty good enough for most EDC situations, isn’t it? This is my dog-walking flashlight, as well as what I use when something rolls under the bed or a chair, and in these roles I get all the light I need – and I’ll go so far as to say that, for being only 28 lumens, it is a very bright 28, and has a good bit of throw for as small of a light as this is. The beam pattern isn’t all that it could be, though: a lot of artifacts and rings. It helps that I like the UI. I prefer clickies generally; I find they are easier to operate with one hand. The Microstream’s clicky has a fairly tough plunger, and takes a bit more force than you would expect to switch on, but this is mitigated by a momentary-on feature that turns the Microstream on temporarily, for however long you keep the clicky semi-depressed. This is the way I use the Microstream most of the time, and I like it a lot.

The ergonomics of the Microstream, like the light in general, are pleasingly adequate. Not totally stellar: the anodizing doesn’t afford quite as much traction as I would like, but it works. The ‘cigar grip’ puts your thumb comfortable over the clicky, and the Microstream’s length is such that holding it in your fist doesn’t occlude the light at all. The Microstream carries quite well. I don’t know how you guys like to roll, but clipped to the front of my pocket, the Microstream is easily accessible, doesn’t mess with my pocket knife, and doesn’t impede my hand when I go into my pocket for something else. Most pocket flashlights are too rotund for me to want to have them clipped to my pocket (I’m thinking of the HDS Rotary or the Olight S1 here), so they get carried loose, which is not ideal. The Microstream, with as small and slim as it is, carries just about perfectly clipped to my pocket.

If you prefer to carry your lights loose, however, I think you’ll find the Microstream to be a well-behaved passenger. It fits into a watch pocket if you want to keep it somewhere away from coins and other riff-raff.

There are a lot of areas in which the Microstream could be improved. That being said, I find it remarkable that in a world in which things like the S1 Baton or the L10C (or, my personal favorite, the Peak Eiger) exist, there is still merit in a product like the Microstream.

A lot of that merit comes from its agreeable price: while there are a lot of awesome lights to be had at the $30 – 50 range, there isn’t any light that I know of that costs as little as the Microstream, and that is as good. If there be such a thing as a ‘beater light,’ than the Microstream is it; it gets the job done, soaks up abuse, and doesn’t offend in any part of its design.

I know this is a hard sell for enthusiasts, but if you’re looking for something simple to tide you over between flashier (ha ha) purchases, the Microstream is worth a look. For somebody looking for a good first flashlight, something with dignity, but that isn’t prohibitively expensive, the Microstream should be on their shortlist.

I own strictly better flashlights than this and still like to carry the Microstream every once and while. It is simple, functional, and affordable, and I recommend it. 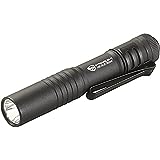 Editor’s Note: Well, it only took 200 or so posts, but we have finally reviewed something besides a knife. I think it’s a nice change of pace, and Ben and I agreed that the Microstream is a good starting point for a library of flashlight reviews. Expect more flashlight reviews (and reviews of other pieces of gear) in the not so distant future.