Last Updated: August 12, 2019
For a long time I believed that the Delica was not a well-designed knife. I realized recently, however, that what I actually meant was that, compared to many other designs in the Spyderco catalog, the Delica is simply outdated. Everything that I find irksome about it – the compromised ergonomics, VG-10 steel, lack of a forward choil – has been fixed in other, similarly-sized designs. Buy the Spyderco UKPK at BladeHQ

Not least among these better designs is the Caly 3. An improvement over the Delica 4 in just about every way, the only issue with the Caly 3 is that it’s two to three times the price of the Delica, depending on which flavor you choose.

But there’s a much less-well-known knife in the Spyderco catalog, a knife that is essentially a super lightweight, slipjoint Caly 3, and that costs only about as much as a Delica. It’s called the UK Penknife in FRN, a truly underrated knife, and one that I think is well worth checking out.

The Spyderco UK Penknife lineup is kind of confusing. The first version, a G-10 model, was released in 2004, designed to conform to knife laws in the United Kingdom, which are stricter than those in the US. In 2005 the DKPK, a variant with a non-functioning Spyder Hole designed with the even stricter Danish knife laws in mind, was released.

In 2010, the Lightweight models were introduced, with FRN handle scales instead of G-10. These models came in three different handle colors, with two different blade shapes, each available with plain, partially-serrated, or fully-serrated edges.

In 2012, most of the color and edge options were discontinued, leaving only the black-handled models, and in 2013 the grind was changed from a hollow/saber grind to a full-flat one. My particular UK Penknife is from the discontinued generation, with maroon handle scales and a leaf-shaped, plain edge blade. The only difference between the currently available model and my own is the grind, which I will discuss below.

History aside, here’s what we’re looking at with the UK Penknife: a blade length of 2 15/16”, a handle length of 4”, and an overall length of 6 7/8”. It weighs just 1.9 oz; this weight is achieved not only because there are no liners beneath the scales, but because Spyderco rather brilliantly shortened the length of the spring, so that it only runs out to only about 60% of the spine; here’s a picture of it: The UK Penknife is made in the Spyderco’s Golden, Colorado factory. On my particular knife, the fit and finish was superb. Everything was nicely finished and pleasing to the eye. The thing I could take issue with is the slightly sloppy edge grind: on side the bevel terminates earlier than the other. Of course, this doesn’t affect performance, so it’s not something I’m losing sleep over.

The Spyderco leaf shape blade has proven its utility over many years, across many knives. The UK Penknife’s particular rendition is almost exactly the same as that of the Caly 3’s, which means a narrower blade profile than something like the Sage knives or the Native, and with a better, more acute tip than the snub-nosed Delica. Like a traditional drop point blade, the leaf shape is a winner not so much because it excels in any one category, but rather because it has a such a wide vocabulary of use: cutting, piercing, mild prying, digging; the leaf shape can do it all.

As good as the blade shape is, the grind on my UK Penknife is a sticking point. It’s a hollow saber grind, and, like the similar grind on some Delica 4 models, it just doesn’t slice all that well. Compare it to the Caly 3’s full flat grind, and it isn’t even close. As Grayson pointed out in his Aculus review, there are definitely a lot of cutting tasks that don’t require slicing, but the fact is that in the case of the UK Penknife, a full flat grind would have just worked better: you would get slicing performance without losing anything. Spyderco must’ve realized this, because the newest model is full flat ground, and that knife, I am sure, would both cut and slice with aplomb.

The UK Penknife’s blade is made from CTS-BD1 steel. This is an American stainless steel that’s really only seen in Spyderco knives, but one that I really like. I think of it as a next-generation entry-level steel. It holds an edge better, and is less rust-prone, than AUS-8 or 8CR13MoV, and sharpens much easier than VG-10. The thing that I like best about it, though, is that it keeps what I call a ‘clean’ edge: that is to say, as it dulls it doesn’t get toothy or cut any rougher, even if it gets more difficult to make a cut. I’ve always cited N690Co as a steel that keeps a clean edge; BD1 is right up there with it. Also worth noting is the finish on my UK Penknife: a muted, mild stonewash, it’s something I haven’t seen on any other Spyderco knife, and it looks really nice.

The UK Penknife’s Caly 3 heritage really comes through in the ergonomics department. A handle with simple, unobtrusive contours, it manages the amazing trick of making any grip you care to hold it in seem like the one it was designed for. The forward half-and-half finger choil, a Spyderco staple, is characteristically excellent, giving you control over the blade during use. Some people don’t like the feel of FRN. I can understand that: in some knives, it feels cheap, flimsy, a compromise rather than a considered choice. However, not all polymers are created equal, and the FRN that the UK Peknife is made from appears to be top shelf. I wouldn’t ever say it feels luxurious or anything like that, it exudes quality. I particularly like that the edges are all rounded over, imitating the smooth, comfortable feel of chamfered G-10 or titanium. In fact, I prefer the FRN scales of the UK Penknife to the CF laminate and steel liners of the Caly 3; they’re more comfortable and durable. The wire clip is the same one on the Caly 3, the deep-carry wire clip. I don’t really know if I understand the ‘advantages’ of deep carry, but with so many terrible clip designs on the market right now, I’m just happy with something that works, even if I personally would prefer the spoon clip for its rigidity: I have broken two wire clips in the past.

Because it is a slipjoint, the UK Penknife opens a lot slower than locking knives: the tension of the spring against the tang remains all the way through the deployment process, generating friction. This doesn’t mean that you can’t flick the UK Penknife open; you can, but it takes a little finesse to do so, and really, I don’t mind just slow-rolling it open. There’s an interesting sort of very mild half-stop too, which I like because it, along with the audible snick you get when the knife is fully opened, gives you plenty of feedback while opening it.

When open, the UK Penknife feels very secure. Like the Pingo, it doesn’t take a ton of force to close it, which I prefer: I don’t like wrestling with my slipjoints to close them. I feel like the UK Penknife will be plenty safe in any reasonable role. But beyond this, holding the knife with your forefinger in the half-and-half choil, you create a sort of lock with your hand – a very nice touch that is echoed in many of Spyderco’s slipjoints. Needless to say, with any cutting tool, and in most real-life cutting tasks, good sense will do more work than a lock would in preventing accidents. The version of the UK Penknife that I have is a near-perfect, lightweight, lockless version of the Caly 3, hindered only by a weird grind. The 2013 UK Penknife fixes that issue and might just be the best entry level-priced Spyderco on the market.

Once you get in the $80-120 range, the competition gets a lot fiercer, but even compared to the those knives – the Spyderco Native 5, the Chapparal, the Paramilitary 2 – the UK Penknife is not without its appeal. For a knife based off one of the perennial darlings of the Spyderco lineup, the UK Penknife is a surprisingly underrated gem. 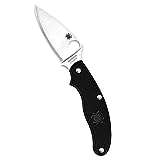 If you want to buy a Spyderco UKPK, I recommend purchasing it at Amazon or BladeHQ. Thanks for reading.