When you have a thing as simple and relatively unchanging as a folding knife, the most meaningful innovation we customers can see is quality brought to affordability. A few years ago my sincerest wish for the knife market was that manufacturers would turn their attention away from the high-end and back to the sub-$100 arena. Buy the Spyderco Polestar at BladeHQ

In a way that wish has been granted, albeit in a mild monkey’s paw scenario. The value scale has not so much been reset as it has been smashed to pieces, shattered by products and practices we wouldn’t have even thought of in 2010, blinded by our Tenaciouses. Companies like Real Steel are pumping out affordable knives with great materials and low price tags. Steel Will, Ontario Knife Company, and even knife world-adjacent companies like Statgear have laser-focused on delivering major bang for buck. And on top of all this, Kickstarter and Massdrop allow for small runs of finely made knives with premium materials at two-figure prices.

The problem is no longer a lack of value knives, but rather a surplus of such richness that it’s difficult to identify the real winners amid the churning ocean of contenders. Going knife-by-knife would be a full-time project, so we have to pick and choose – and so I started with Spyderco.

I’ve already talked about the Chaparral FRN, but after that I wanted to go lower on the price scale. This naturally lead to the Polestar, a sub-$100 Sal Glesser design. Where does this Sal Glesser design fall in terms of quality and worth? Let’s take a closer look.

There’s something distinctly old school about the Polestar. With its homely lines and wide profile, it looks like one of those lumpy, charming Spyderco designs from the 90s. At the same time it comes across as a more refined Tenacious: skinnier, with a streamlined handle and narrower blade. Given its price, however, the more relevant comparison lies with the Delica and Endura. It falls between the two of them in edge length but is wider than either.

Do we call this a leaf shape blade? Whatever it is, it works wonders. I’m by no means a full flat grind zealot, but Spyderco has a particular mastery of the form. Here the full flat grind enables this medium-sized knife to slice aggressively and cleanly, while still imparting a feeling of durability and sturdiness. The closest analog I can draw is the Paramilitary 2. If you like the way that knife cuts, you’ll find a lot to love on the Polestar too.

The Polestar’s BD1 steel places ahead of the 8Crs and AUS-8, and keeps a significantly cleaner edge than either, even as it dulls. This makes it a viable cutter even at greater levels of wear than its competitors, which often get toothy and uneven as they work. BD1 also shrugs off both rust and staining/smudging. We’ve seen S35VN and D2 at shockingly low price points recently, but if I had to forecast what will be the next de facto budget steel, CTS-BD1 (and its successor CTS-BD1N) get my vote. CTS-BD1 is a hassle-free steel anyone can manage.

Before I held the Polestar myself, I wondered if it would be all that comfortable. I shouldn’t have worried: the Polestar feels 100% like a Spyderco. Like all of their best handles, it feels like it’s rushing to meet your hand as you close it around the knife. Despite the plain appearance there are some super thoughtful touches. A dip just behind the thumb ramp accommodates the lower part of the digit more comfortably than a straight line would. An area around the pivot curves inward, creating a pinch point between your thumb and forefinger for detailed, high-control cuts. The Polestar is an unmitigated success in the ergos department. Carry… well, not so much. This is a wide knife. At its widest point it’s about 1.5 inches across, and unlike other wide Spydercos it maintains most of the width for its entire length. I wouldn’t classify it as an unforgivable pocket hog, but you’re going to notice this one anytime you reach into your pocket, and it probably isn’t a great carry for shorts or slacks. There’s also an inch or so of knife that sticks out during carry; in the tip-up configuration, you get a massive lanyard hole and the Polestar’s little tail out for all to see. These issues combine to be, for me, a nearly fatal flaw. During the testing period I often just didn’t feel like carrying the Polestar because I had so many other knives, some with equivalent (or greater) blade lengths, that took up significantly less pocket space. On the bright side it’s a thin knife across the spine, thinner than a Tenacious. The pocket clip is that stalwart standby, the Spyderco spoon. It’s the right choice for this knife, keeping the Polestar in place as you walk. It’s also four-way positionable, so both righties and lefties have a second configuration if the default one irks them too much.

The Spyderco Round Hole plus phosphor bronze washers is rarely a bad combination, but it isn’t always a fast one. Depending on the lock and structure of the knife, you might have to slow-open whether you want to or not. My Polestar, however, does not present that problem. Its medium-strength detent allows for thoughtless flicking, but it isn’t so jumpy that you can’t roll it out if you want to. One note: the overall fit and finish on the Polestar were great, but the detent ball did rub harshly against the tang as the knife opened. If I was slow rolling, it made a hoarse, scraping noise. A dab of Nano-Oil on the detent ball fixed this problem, making for a smooth, silky deployment.

I don’t think a lot of people associate Spyderco with liner locks, even though the Military, one of their classics, is a liner lock knife. In fact, according to Sal Glesser, the Polestar idea originated as a concept for a smaller Military designed for the Boy Scouts to use. With this in mind, you can see that influence in the larger-than-normal cutout to access the locking leaf. I thought I wouldn’t like this but over time I got used to it, and I never accidentally disengaged the lock even when gripping the knife hard. And regarding strength, I never lost confidence. The entire locking face contacts the tang, and there is not a smidge of play in any direction. You won’t ever have an issue with this knife during regular use. The Polestar is a good knife. I like it, but I like it more than I’ll carry it, and much more than I can recommend it.

It comes down to that teeming body of sub-$100 offerings right now, and where this knife falls into that ocean. The Polestar goes for about $64 as of April 2018. That’s only $10 cheaper than a Delica or Endura, two knives that it doesn’t beat out in any category, and loses to in several. And it’s only $15 dollars cheaper than the FRN Chaparral, the best knife money can buy for under $100.

Part of what made the Tenacious such a success was its original $35ish dollar price point. Few people would’ve picked it over a Delica or Endura if they cost the same, but access to that Spyderco smartness in a cheap package was an unbeatable combo.

The Polestar is a better knife than the Tenacious, but it doesn’t enjoy the added edge of a good price. Compared to Real Steel’s myriad offerings, or Steel Will’s Cutjack line, it has an unimpeachable Spyderco design pedigree, but it’s also pricier. You’ll have to decide how much more you’re willing to pay for that pedigree – and again, if you are willing to pay for it, you may as well drop another $10 and grab a Delica, Endura, or Chaparral FRN.

A truth is that we, the consumers, don’t really get to know what goes on to get a knife made. We can guess, but until companies become more transparent that guessing will remain a fantasy, not particularly helpful. But I will say that it’s a shame the Polestar isn’t cheaper. Alongside its little brother the Alycone it could have been a real highlight, a great design and value. But with that awkward price I can only unreservedly recommend it if you aren’t interested in the Chaparral FRN, Endura, Delica, Cutjack, the RAT 1 or 2, the Skyline, or virtually anything in Real Steel’s lineup. 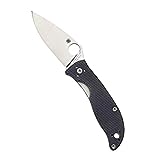 I recommend purchasing the Spyderco Polestar at Amazon or BladeHQ. Please consider that buying anything through any of the links on this website helps support BladeReviews.com, and keeps the site going. As always, any and all support is greatly appreciated. Thank you very much.