Last Updated: July 27, 2019
I’ve been vocal in my dislike of the Delica. I’ve been critical of its ergonomics, its steel, its price point. I was convinced that it was overrated, past its prime. I implied that it only continued to sell because of the years’ worth of mythology that surrounds it. In short, I said it was a bad knife, and I was wrong. As I have slowly learned in recent times, the Delica was and is a truly great knife. It’s still a benchmark for quality and utility in the mid-price bracket. So when Spyderco revealed the Delica 4 Wharncliffe I snapped one up to review. It was an opportunity to approach the Delica from a critical perspective and formalize a lot of the good things I have come to think about it.

The D4W has a cutting edge that is 2.5” long and a total blade length of 3”. Its handle is 4 1/8” and it has an overall length of 7”. It weighs 2.4 oz. and is made in Seki City, Japan. Like the standard Delica it is designed for EDC, and all of its dimensions are well-suited for that role except one, which I’ll discuss later on. The Wharncliffe provides an interesting shift in cutting attributes. It’s less a matter of performance than of control. A synergy between the angle of your grip in relation to the point means that it always goes exactly where you want it to, opening packages and boxes with surgical precision. It feels as responsive as if I were aiming with a laser pointer. In that same “normal” grip the straight main edge is angled upwards too, pre-situated for an aggressive cutting approach.

There’s a bonus grip that the Wharncliffe shape especially excels at. Because the blade itself is so wide, you can move up it in a modified pinch grip that gives you supreme control. You can use this grip on the standard Delica too, but it feels better here with the extra steel in hand. And there’s something very people-friendly about it (probably because you’re palming most of the knife), so if you’re opening something around others this may become your grip of choice. I’ve been dismissive of VG-10 in the past but I’ve come to appreciate it. It emphasizes ease of maintenance and in an EDC blade that’s great. Rust resistance is superb, edge retention is reasonable, and sharpening isn’t too much of a chore. Be forewarned: it does take more time than AUS-8 or 8Cr13MoV. It might not feel like you’re improving the edge at all, at first. But stick with it and all of a sudden you’ll notice it getting very sharp. I also find that straight edges are easier to sharpen than curved ones on a rod-based system, so if you have a Sharpmaker or similar setup you’re in luck.

We’re all familiar with the Delica handle shape: a simple curve with three separate finger grooves sculpted into the FRN scales. Bi-directional texturing, nested and milled stainless steel liners: a familiar construction, but a stable, durable, and proven one. It took me a long time to appreciate the Delica’s ergonomics. The three grooves seemed restrictive; there was basically only one way to hold the knife. But that one way is comfortable and effective.

I’ve already talked about how on this Wharncliffe model it helps align the cutting edge, but in general Spyderco has done a lot with a relatively narrow handle. Once you get the hang of it, it feels roomy and right. I used to have trouble getting my fingers to align with those grooves, but now that rarely happens; I guess I developed some kind of muscle memory or something. It’s also worth noting that the grooves aren’t sharp enough to be uncomfortable even if your hand isn’t perfectly aligned on them. This design could be improved with a true finger choil. As it is, with the D4W in particular the modified pinch grip on the blade makes up for this somewhat, and you can put your index finger underneath the kick in a rough approximation of a choil if you want. The classic spoon clip is still the best clip Spyderco makes. I like the increase in durability over the wire clip, and I don’t think the lack of deep carry is much of a loss – I like having a little bit of knife exposed to grab onto. It’s a perfect fit for the Delica, too, with the pinch point being near the center of the knife to keep it from swinging around in your pocket.

There is one issue of note with the D4W and that is its width. It’s as wide as a Paramilitary 2 in the pocket. That’s a significant deviation from slimness of the standard Delica 4 and worth being aware of before you make the purchase. I like being able to reach into my pocket and not have my knife blocking up the passage, and while the D4W is by no means terribly wide it is definitely noticeable, and definitely worse when compared to the vanilla model. Spyderco could have changed the blade profile, making it less bulbous, but it was kept this way by design. The D4W came to be after a Spyderco forumite drew it up to meet his specific needs during the workday. One of his requirements was to have a wide enough blade so that it could be easily opened with two hands if need be, and the extra material helps with that. It also helps with the modified pinch grip. Taken in context, the wide blade is actually a “feature,” albeit one that comes with a serious drawback, so be aware.

The Round Hole works as good here as it has on every other Spyderco knife since the dawn of time. Comfortable and ambidextrous, it doesn’t really get any better than this. As a lockback, the Delica 4 Wharncliffe isn’t going to have the fastest deployment in the world, but it is certainly adequate, and over time as the parts wear against each other it will get smoother and smoother. My five year old Delica is nice and buttery. This is a knife that will age gracefully. Durability and reliability will be high with the D4W’s lock. In my example there is no side to side or up and down play, and no lock flex except in the heaviest cuts. Lockbacks are also naturally ambidextrous – a nice synergy with the Round Hole and symmetrical handle design on the Delica. I also appreciate that disengagement is not overly stiff – some lockbacks are real thumb bruisers, but this one is nice and easy, without being dangerously loose or anything.

The Delica 4 Wharncliffe is a great addition to the Delica corral. A new blade shape is a meaningful change and one that will, I think, work for certain types of users better than the normal drop point. The additional width in the pocket is a bummer and is the biggest flaw I can see in what is otherwise a pretty spectacular EDC.

Truth is, a lot of users won’t care about the additional pocket space required. They’ll relish the extreme control and precision of the Wharncliffe blade shape, qualities that are enhanced by the time-tested Delica handle design.

So I’m glad of the opportunity to talk some sugar about the Delica in general, and also happy to report that this new version is entirely worthy of your attention on its own. It doesn’t make a great design any better, but it’s a different, valid interpretation of one of the best EDC knives in the world. 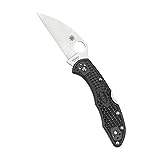 If you are thinking of buying a Spyderco Delica Wharncliffe, please consider purchasing it at Amazon or BladeHQ. By purchasing things through any of the links on this website you support BladeReviews.com, keep the website free of annoying banner ads, and help produce future reviews. Thank you very much.