The vice president under Woodrow Wilson, a man named Thomas Marshall, once said that “What this country really needs is a good five-cent cigar.” Even when the world is going to hell in a handbasket, there’s reassurance to be had in getting a great bargain.

Admittedly, today’s consumers are spoiled for choice when it comes to budget knives—the world is yours for under fifty bucks. Spending more may get you better steel, higher build quality, and more thoughtful design, but I would reason that 98% of people will have their EDC needs met by something as ubiquitous as a CRKT M-16. Buy the Ruike P801 at BladeHQ
Buy on Amazon

Fortunately, the knife world has been anything but a race to the bottom over the last fifteen years where build quality and value are concerned. If anything, the eye-popping amount of competition within the “budget” category over this stretch of time has continually put better and better products in front of consumers without exceeding that $30 to $50 threshold.

Enter the Ruike P801. Does the world need another budget-category knife? Well, when it punches above its weight to this degree and coming in at the low end of what we’re calling “budget” these days, I’d argue we do.

The Ruike P801 is a good “medium” knife. With a closed length of about 4 and a half inches and a blade length of 3.4 inches, the P801 gives you approximately the same cutting length as something like Spyderco’s famous Paramilitary 2 with what feels like an inch less of handle. The P801 is also deceptively thin, allowing it to disappear into a pocket or sit flat against the palm of the hand quite easily. I love how svelte this knife is without sacrificing length or usability.

The primary drawback is weight. The Ruike P801 is all stainless steel and clocks in at 4.23 ounces. So despite being about 30% thinner than the Paramilitary 2 and less bulky, it weighs about a half-ounce more. You will be aware that you have it on you. Onto the blade, which I think is outstanding. The P801 is a fairly conventional flat-ground, drop point style, but there are two major pluses. The first is that it’s made from 14C28N steel. I wish this were a more common option among knives. In my experience, it takes an edge just as easy as 8Cr13MoV or AUS-8, but tends to hold that edge for longer. I’d say it’s about as good as D2, but a little more user-friendly. Impressively sharp from the factory, and aided by a spine that’s a little thicker than you typically get in a medium EDC type knife, the Ruike P801 is an excellent slicer. It will make confetti of whatever paper you have lying around on your desk and has a nice amount of belly that allows it to easily bite into most material on light pull cuts. It outperforms knives in my collection costing more than three times what Ruike is asking. It might also be a small thing, but the blade doesn’t announce that it’s made in China. I mean, the knife is Chinese made (what isn’t these days at this price point?) but I’m glad that it’s not being shouted from the proverbial rooftops. Instead, we get some goofy, overly long “serial numbers” that identify this particular knife as WBVEZU00237—as if P801 wasn’t nondescript or specific enough—but it’s a relatively benign design element.

As mentioned before, the Ruike P801 is a flat knife at only about a third of an inch thick, not counting the clip. However, it is a thoughtful, well-considered kind of flat that hugs the contours of the hand without ever being uncomfortable or overly aggressive.

The knife has to be felt to be appreciated. I particularly liked how the rear of the handle angles away and appreciated the jimping on the rear spine. Together with the generous index finger relief (and assisted by the flipper shape), you get a knife that settles really well into the hand for serious work, whether that’s for forceful cutting or for possible self-defense use. These features are all the more appreciated given the flat, untextured stainless steel of the handle. One might think that a knife like this would be unduly slippery in the hand. Quite honestly, the ergos allow a remarkably stable grip with only the thumb rested on the jimping and the index finger curled beneath the flipper tab. This thing isn’t going anywhere.

One design element done absolutely right is that all of the sharp edges have been knocked down (“Dehorned,” as those of us from the gun world might describe). Every corner on the frame of the knife is subtly radiused so it won’t chew up your hands or the liners of your pockets. This also creates a really cool “edge worn” look where the flats are a solid color, but the stainless pokes through just a little on every edge to outline the contours of the knife.

As for the pocket clip itself, Ruike has done a good job of designing a clip that isn’t horrifically oversprung (a perennial pet peeve of mine), but is grippy enough to stay put. The clip is also deep carry and matte black, which further reduces visibility. Or at least it is on my blackwashed version; the other P801 has bright blue anodization. Which is cool, but uh, will draw the eye and eliminate the benefit a deep carry clip is intended to provide. The clip can’t be repositioned, but the right hand, tip up orientation should work well for most. One definite knock on the subject of clips: given how flat the knife is, the pocket clip expands the width of the knife by a good 40% at its highest point. To me, this creates an inevitable hot spot at the bottom palm of my hand if gripped naturally and tightly. I can appreciate the design of the clip, but I backed out two T6 screws and didn’t have to worry about the hot spot any more. And hey, if I lose it, I’m out thirty bucks.

Another home run here for the Ruike P801. The pivot is ball bearing-based, which again is unexpectedly pleasant for the price point, and the detent is dead on. It’s nearly impossible to mis-deploy this knife, and any degree of purposeful downward force put on the flipper tab will cause the blade to kick out into full deployment. This is once again the kind of action that makes one wonder why assisted-opening flippers are even a thing. You can hold your wrist as stiff as a board and deploy the Ruike P801 from any angle. It’s idiot proof.

And kudos again to Ruike for the design of the P801 flipper tab. Overly rounded tabs or those with shallow engagement angles always get my goat, since they usually work against the goal of aggressively building up enough force with the index finger to kick out the blade. Maybe it’s to protect our sensitive digits?

Here on the P801, we get to have our cake and eat it, too. The flipper has a right angle shelf that gives good purchase, but again those rounded edges aren’t going to abrade your index finger when it engages the flipper or hits the top of the frame. A-plus work here. Lock-wise, the P801 is solid. About 75% of the frame lock mates with about 60% of the bottom of the blade, giving an engagement surface that’s significantly thicker and hardier than what you’d find in a liner lock system. And once again, consider you’re also getting a frame lock design at a $30 price point. Some have commented that the P801 has a clear Achilles heel: blade centering. Admittedly, mine is not perfect, but unless you go looking for it this is hard to notice. On deployment, my blade might be about two to three degrees off the center line of the frame. This may bug you to no end, but if I have to close one eye and squint to notice it, it’s a non-issue, and all the more so given the lack of blade play.

Onto the elephant in the room: some will see the $30 price and note this is a Chinese knife and be instantly deterred. I mean, the Spyderco Tenacious is Chinese made, as is just about every Kershaw and CRKT, but some might feel some sense of loyalty in that at least Spyderco, CRKT, or Kershaw are American companies that vouch for their production processes and product.

So here comes this company called Ruike that nobody’s ever heard of, and you’re supposed to call it “Rake” (and damned if I will; to me this sounds out as “ryke” if we’re being generous), and it certainly sounds like some kind of fly-by-night operation that will take your money and never be heard from again if something goes wrong. I absolutely get that.

As it turns out, Ruike is the knifemaking wing of the same company that makes the generally well-regarded Fenix brand of flashlights. They’re basically taking the same blend of quality and ruggedness that made them a trusted name among gear junkies and translating that into blades. That’s a fairly decent pedigree from a knife company I’d never heard of before. Consider this: for literally double the cost of a typical “gas station” knife, you’re getting not just an entry-level steel, but a step up to 14C28N, all stainless steel construction, a frame lock, a ball bearing pivot, a deep carry clip, and a stupid-proof flipper action with great ergos and well-considered dimensions. This is basically a knife nerd’s wish list for a sub-$70 knife, but at half that price. It’s screaming good value.

At $30 to $35, I expected to say “yeah, it’s decent, I guess,” but instead found the Ruike P801 making its way into my pocket more and more alongside a rotation of Benchmades and Spydercos. There’s a chance you might not love this, but if internet buzz is to believed (along with my own thoughts here), this is a low-risk, high-reward proposition if there ever was one. 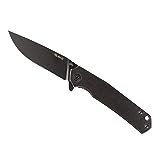 Editor: I recommend purchasing the Ruike P801 at BladeHQ or Amazon. Thank you for reading.