A while back, I did a review of the Cold Steel Kudu, Lynn Thompson’s modern take on the South African Okapi 907. Within that article, I made some statements concerning the quality and reliability of the traditional Okapi which were based on personal research and input from South African friends experienced with the Okapi. After reading my review, CAS Iberia, an importer of authentic South African Okapi knives sent me a couple Okapi 907 models to review, hoping to change my opinion of this South African classic. Different regions of the world are often known for a particular knife or knife design. In Switzerland, it is the Swiss Army Knife, in Sweden, it is the Mora, and in Africa, it is the Okapi. The original Okapi was produced in Solingen, Germany in the early 1900s for export to the German colonies in Africa. The name comes from a unique, endangered African animal that has the face of a deer, the shape of a giraffe, and the stripes of a zebra on it legs and hind quarters. In 1988, All Round Tooling (aka Okapi South Africa) purchased the trademark and tooling and moved production to South Africa, where production takes place in the small village of Isithebe, north of Durban.

To those initiated into the blade arts, the Okapi is easily recognizable as the knife of the Piper System. Although much more refined in its current state, Piper originated essentially as a research model into the movement and methodology of the Cape Gangster, for the purpose of learning effective defense against this knife-wielding criminal element. The popularity of the Okapi amongst the South African criminal element has earned it a somewhat nefarious reputation, to the extent that it has been dubbed the “Saturday night special” of knives. While its history is colorful and fascinating, the real question is whether this inexpensive knife that has garnered a cult-like following over the years can overcome the hype and prove to be a knife worthy of its stature.

The 907 is made using what the manufacturer describes only as “carbon steel.” My research suggests the steel grade used in most Okapis is 1055. 1055 is a plain carbon steel that has about a 0.55% (0.5% – 0.6%) carbon content. It is a good hard-use steel that is commonly found in machetes, tomahawks, throwing knives, and swords because of its toughness and survivability against repeated impacts; however, due to its relatively low carbine content, it is often found lacking in the edge-retention category. At first glance, the untrained eye might take the 907’s 104mm stamped blade as having a flat grind (the word “grind” being used loosely, since it is not actually ground), but it is in fact chisel ground with a right-side bevel. The thinness of the blade (2.5mm) and the presence of double-sided micro-bevel makes this difficult to detect. It is a secret that is only revealed by the very slight plunge line on the bevel side. The factory edge had much to be desired and required some intervention to make it functional. I was able to put a very sharp edge on it, though.

The finish of blade spine was pretty rough. It had a depression that ran the length of the blade, with small, visually detectable grooves running perpendicularly. The blade finish had a fair polish. One of the knives had a small, unintended divot in the left side of the blade, serving mostly as a cosmetic flaw.

The banana-shaped handle of the 907 is 137mm long and made from two pieces of resin-impregnated wood. A decorative but rough moon and stars metal inlay accents the wood on the left side. The wood spacer behind the lock spring had a slightly rough fit with some dark discoloration. It is difficult to determine whether this dark color is a result of the epoxy resin holding it together, or if the wood was burnt during sanding. Considering it was present on both knives, and the other Okapis I have seen, I am leaning more toward the resin as the culprit. The handle is thin and narrow, but not uncomfortable in the hand. The absence of any sort of guard makes it so that the user can adjust their grip along the handle, but obviously adds the danger of the hand slipping up onto the blade during any type of thrusting action with the knife. This is inherent with the ring-lock design in general and is not specific to the 907 or the Okapi brand. Just realize that this knife is designed for cutting, not thrusting.

The 907 utilizes a ring-lock mechanism (different from the rotating bolster found on Opinel Knives). A ring-lock is kind of like a back-lock in function, except instead of pressing down on the back of the locking bar (rocker bar) to release the lock, you pull up on the ring located near the front of the locking bar. This mechanism is composed of stamped metal and is completely external. The reliability of the locking mechanism was one of the criticisms I gave of the Okapi in my review of the Kudu; however, the lockup on the two 907 samples I received was quite decent. Blade deployment requires two hands to do safely. There is a technique for utilizing a one-hand deployment, but this requires modification to the locking mechanism to decrease the spring tension on the lock. Not something I recommend.
There is also some play in the blade as there are no spacers present. In fact, placing a moderate amount of lateral tension on the Blade will cause the thin handle to flex above the small pivot pin, indicating that a reasonable amount of leverage against that joint will likely cause the handle to snap. The tang of the 907 has several notches which give it a “ratcheting” effect when opening and closing. These notches are there to prevent the blade from snapping closed when disengaging the lock, which requires the user to pull on the ring while simultaneously pressing against the back of the blade. The safest way to disengage the lock is to place your index finger through the ring and brace your thumb against the spine of the blade, then pull the ring and push against the blade. Interestingly, because of the locking mechanism design, this style of knife is known as a “ratchet knife” in Jamaica, where the Okapi is the most popular version.

As a collector and enthusiast of weapons and tools of the world, I find the Okapi 907 to be both fascinating and attractive in its own special way. It is not a high-end knife, nor is it a high-quality knife. It is what it is, and that is an inexpensive workman’s knife. Its rough features and cosmetic flaws are the very thing that I find attractive about this knife.

This would not be a knife that I would seek out for everyday use. In fact, I stand by my original argument that the Cold Steel Kudu is superior to the Okapi 907 in every aspect. The Kudu has a superior level of quality, durability and reliability, is more aesthetically pleasing, as is more reasonably priced. No, for me the desirability of the Okapi 907 comes from the feeling of owning an iconic piece of history that only comes with owning an authentic Okapi with all its flaws and shortcomings.

Let me leave you with a final word of caution concerning ring-lock knives. While working on this review, I was comparing the lockup of the Kudu and the 907. During my examination of the Kudu, I found myself at a point where I could not get the lock to disengage using the technique I described earlier (even though I have done this a hundred times before) because the spring tension was so tight.

To get some added leverage, I placed my left hand on the back of the blade, keeping my fingers and thumb straight so as not to let them get in the way of the blade, and kept my right index finger and thumb in their original position. When the lock finally disengaged, the knife turned clockwise and the blade rotated inward on the ring, bypassed all the safety notches, and closed on my thumb. The result was a deep ¾” laceration and a trip to the ER. An exciting way to learn how NOT to close a ring-lock knife. 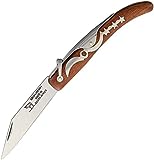 I recommend purchasing the Okapi 907 at Amazon or BladeHQ. Please consider that purchasing anything through any of the links on this website helps support BladeReviews.com, and keeps the site going. As always, any and all support is greatly appreciated. Thank you very much.