Kershaw’s slew of new releases is always some of the biggest news out of SHOT Show. Each year the company unveils more than a dozen designs, including high-profile collaborations as well as compelling offerings from the talented in-house crew. Everything they make is accessible, with even the most lavish releases rarely going over $100. There’s bound to be something that appeals to your taste and budget in Kershaw’s yearly SHOT barrage.

Buy the Kershaw Dividend at BladeHQ

For me, that something this year was the Dividend. In fact, it stuck in my mind as one of the most exciting knives of SHOT, full stop. Ostensibly a shorter and slimmer version of the Link, to me the Dividend seemed much more closely related to the Leek: a slim, small, lightweight, US-made SpeedSafe EDC knife with an accessible price point. Before I even had one of my own I was sure I loved it.

But then I got my own Dividend in hand and – well, I didn’t hate it, but it did, strangely, seem like a different knife than the one I handled earlier this year. Not a terrible knife, just a much less inspiring one.

The news isn’t bad so much as complicated. There’s a lot to think about with the Dividend if you’re considering picking one up, so let’s take a look.

We say a blade shape is “modified” when it deviates so much from one of the standards that we’re not really sure what to call it. So the Dividend’s hollow-ground blade is a modified wharncliffe or drop point, depending on how you look at it. It’s a good blade, basically one continuous, gently curved edge. I generally like a mix of straight edge and belly, but the curve here is so gradual in places that, functionally, it’s straight. Cutting threads, breaking down boxes, slicing up an apple – these are the kind of things you’re going to want to use the Dividend for, and in these tasks it will do just fine. Blade steel is 420HC – bad stuff. This isn’t an entry-level steel, it’s an outdated one. The blade geometry makes for an effective cutter, but after working through just a little cardboard the edge was drastically reduced. Not impressive. It doesn’t even have the good grace to maintain a clean edge; after that initial cut test it became really toothy. The more I use knives the more I like accessible, easy sharpen steels. 420HC is definitely easy to sharpen, but there’s a baseline for edge retention that it failed to clear as implemented on the Dividend.

The obvious response to this criticism is the price: the Dividend is designed as an affordable knife, and costs needs to be kept down with affordable steel. But the Dividend isn’t that cheap. I paid north of $40 for mine. Everyone’s value scale is calibrated differently, but a $40 purchase is not one I personally make lightly. At the consumer’s end of the equation, it’s hard to say for sure why a certain decision was made on a knife. But whatever the reason, it’s unfortunate that Kershaw chose to go with 420HC steel on the Divdend.

There’s this one handle shape that KAI’s in-house designers return to over and over again. We’ve seen it on the Link, the Rove, the ZT 0095BW, 0770, and of course the Tilt and 0777. It’s a good shape: simple, slightly hump-backed, grip neutral. It’s back again on the Dividend, available in two different material choices: a GRN configuration that is slightly cheaper but makes the knife more rotund, or the slim, sleek, Leek-like aluminum that I opted for. There is a decorative GRN backspacer as well – not really a pro or a con, I guess, unless the idea of lint getting caught in there really gets to you.

I’ve already posited that the Dividend is a secret sequel to the Leek (a Leekquel, if you will) and that really comes through in the aluminum model. The Leek managed to be very thin without feeling overly narrow, and Kershaw pulled off the same trick with the Dividend. It is a rare flipper knife that doesn’t butt your knuckle right up against the tab, too, so that’s all to the good. Remember when Kershaw had some of the worst clips in the biz? Go look at the nightmare clown clip on the Zing or the Tyrade. Those days seem to be behind us. The clips they’ve been using in recent years are so much better. On the Dividend we see that same standard, almost nondescript clip that has appeared on the Link and some ZTs. I like it. My one worry is that the vertical screw orientation will be prone to wiggle over time. That being said I’ve had no problems with it so far with the Dividend. It has remained secure, doesn’t interfere with any grip, and is adequately deep.

Ah, SpeedSafe: the 8Cr13MoV of deployment methods: on so many knives, what is there left to say about it? The Dividend debuted alongside a few manual knives and I would have liked that setup here as well, but there is no denying the SpeedSafe deployment works great. Also, there’s a definite synergy between flippers and SpeedSafe, because they eliminate the possibility of misfires. The Dividend will deploy safely and surely every single time (unless the spring breaks or wears out, at least). The liner lock on the Dividend is so squared away and familiar I have qualms about wasting more than a sentence or two discussing it. Rock solid, and exceedingly strong for all reasonable use of this EDC knife. Kershaw left just enough of it exposed to make sure you get good purchase on it for disengagement. Good stuff.

Dividend or Link (or Leek?)

The Dividend is positioned by Kershaw as the smaller follow-up to the Link. The relationship is certainly valid: the knives have material, mechanics, and that KAI handle shape in common. But they feel very different in use: the Link is much thicker, it fills the hand and feels like it’s meant to be used hard. The Dividend, while undeniably durable, is slender and elegant, keyed into a more EDC centric philosophy. I bounced off the Link. I wasn’t interested in it when it was announced and have never been tempted to pick one up since. Dan sent me his to compare in this review, and some hands-on time confirmed what I already suspected: I prefer the Dividend in every way. The Dividend is much slimmer, with a better blade shape, and weighs nearly two ounces less. The size difference isn’t so pronounced that there are tasks the Link can do that the Dividend can’t. It is just a better knife.

The real competition in the Kershaw catalog, of course, comes from the Leek. And how does the Dividend compare to the Kershaw’s most iconic knife? Pretty favorably. I like the Dividend’s larger handle and less doofy pocket clip much better. Its blade shape has some of the sinuous character of the Leek without the fragility. It would be a straight upgrade were it not for the steel. 420HC is bad, there’s no two ways around it. Ultimately, I’d probably still give the nod to the Dividend, but until we see one with better steel (and I suspect we will) this matchup isn’t cut and dry as it otherwise would be.

In the intro I alluded to my disenchantment with the Dividend. There’s a lot of good to be found here: I like the slim profile, blade shape, weight, and pocket clip very much. I can even get behind the SpeedSafe mechanism. But I keep stopping just short of enthusiasm. Why is that?

The overall design is deeply competent, but also fails to stand out compared to classic in-house Kershaws like the Skyline and Knockout, as well as their more characterful collaborations and competition outside the Kershaw family. And over time the price thing really got to me. The aluminum version of the Dividend will probably cost you just under $50 – not what I consider a value knife, and not offering much compared to other knives you can get for the same price or less.

But although my initial enthusiasm eroded away, the Dividend isn’t bad. Carrying it was never a chore, even if it was boring and the steel was not so good. Sometimes you get a knife in your head and you just want that knife, even if it’s not mathematically the best choice. If the Dividend is such a knife for you, I say go for it. Otherwise, grab a Skyline or a save up for a Delica instead. 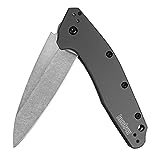 I recommend purchasing the Kershaw Dividend at Amazon or BladeHQ. Please consider that purchasing anything through any of the links on this website helps support BladeReviews.com, and keeps the site going. As always, any and all support is greatly appreciated. Thank you very much.