If you hadn’t heard: the war between form and function continues to rage. Sure, in a perfect world we’d end up with tools that look fantastic and work great. That said, the reality of the knife world is that most of us end up with pug-ugly blades we don’t mind hammering on, and a lot of drawer queens that we feel wrong about putting to hard use. Buy the Gerber Jukebox at BladeHQ
Buy on Amazon

The Gerber Jukebox has oddly fallen right into the middle of that continuum for me. Like most of the knife’s buyers, I originally saw the retro-cool looks and unique operation and found I couldn’t say no. However, after getting the piece in hand, I encountered a few clear drawbacks that prevented me from absolutely falling in love with the design.

Now here’s the ironic part of it all: the fact that I didn’t initially love it caused me to beat on the thing and push it a little harder than I would have ordinarily. As a result, it’s one of the few knives I own that’s both a neat showpiece and gets a frequent nod when there’s a job to be done.

The Gerber Jukebox mates a 2.75” blade into a 3 7/8” long handle. Much of the retro appeal comes from a 7/8” broad sheepsfoot blade with a very steep descent between spine and tip. So much so it really resembles a straight razor more than a sheepsfoot. I find this blade shape to be well-suited to most blue collar cutting tasks.

Compared to the usual suspects of the Spyderco PM2 and the Ontario Rat II, the Jukebox is small, but squat. Closed, the knife is a hair under a half-inch thick (not counting the clip) and sits about an inch and a quarter at its widest point. Overall, the knife is weighty without feeling cumbersome at 3.8 ounces on my digital scale. Now for the negative: the Gerber Jukebox uses a 7Cr17MoV steel. This was a new one on me, and required some Googling: apparently it’s even more budget than the Chinese standard bearer of 8Cr13MoV. Roughly equivalent to 440a, expect it to have slightly less edge retention than 8Cr but be even easier to sharpen. Considering that just about every knife these days from a quality manufacturer has landed on 8Cr as the bare minimum in steel quality, and given the $35 to $40 price point of the Jukebox, this seems an odd choice from Gerber.

What I can forgive less than the steel was the absolutely atrocious factory grind, which was not only dull but completely asymmetrical. One side looks like a flat grind, the other a hollow grind, and there’s a visible difference in terms of where the grinds start from the spine of the blade. At one point I might have accepted this as what one could expect from a “budget” knife, but competition is stiff these days. The sloppiness becomes even less excusable for a company trying to woo the enthusiast market segment. You’ll notice my knife doesn’t have a perfectly straight edge and has a slightly rounded tip. That’s on me, not Gerber. In putting an edge on the knife, I turned to the Work Sharp company’s WSKTS-W model. Yeah: the electric-powered one. Maybe I was a little too aggressive in my first outing with the device and was a little heavy-handed with the coarse grit belt. Maybe my lack of finesse was an especially bad fit with the softer 7Cr steel. Live and learn. In my defense, it gave the Jukebox a razor-sharp edge for the first time in its life, and as the kids say, you only YOLO once.

Undoubtedly the biggest draw of the Gerber Jukebox past the straight-razor aesthetic is the tortoiseshell treatment on the acrylic handles. These are just awesome, and I hope this catches on. A lot of us gravitate to a single cool feature of a knife as reason enough to buy it for a collection, and this was the golden ticket that allowed the Jukebox entry to my shopping cart. The ergos aren’t too bad when it comes to the Jukebox. It’s very nicely rounded and dehorned, making it virtually hotspot free. The stainless hardware is nicely polished, and the acrylic panels are nicely fitted to the frame. The knife has a satisfying weight in the hand, and the handle is right-sized to permit a four-finger grip without feeling bulky.

One issue made itself known in a way I’m glad didn’t amount to much. I realized that while the Jukebox feels good in the hand, its symmetric nature makes it harder to tell the orientation of the knife if you pick it up in the dark. I was breaking down some boxes at about 10pm when I realized I’d picked the knife up ass-backwards. One would think the flipper tab and pocket clip would’ve served as significant tactile clues as to which way the sharp end is pointing, but somehow I found a way to misorient the knife, so be careful. The Jukebox’s pocket clip is deep carry in a non-ambidextrous, tip down orientation. Neither should be a dealbreaker: the knife is easily opened and deployed with the left hand, and I don’t think this is built to be opened at speed (more on this in the next section) or designed around a self-defense role. That said, we’d be remiss not to talk about the flipper. Some of the benefits of deep carry are slightly negated by a half-inch metallic protuberance. I didn’t get prodded by the flipper as some other online reviewers have mentioned, but it does make the knife a little conspicuous in the pocket.

I’m going to upgrade my original assessment of the Jukebox’s deployment from “awkward” to a new verdict of “unexpectedly gratifying.”

First, you might see the upward extension on the blade in the closed position and assume that this is a fidget-friendly front flipper. It is not. The blade is under stiff enough tension that you can’t easily flick this into deployment. Even if you did try to build up momentum with a wrist snap, the way you’d be gripping the knife would mean that you’d probably just end up pinning your index finger between the handle and the extension before the liner had a chance to engage. If you make peace with the fact that your deployment won’t be instantaneous, you can still have some fun here. The Jukebox does indeed open one-handed quite easily. The thumb can roll the blade out to a ninety degree position, at which point the index finger can hook over the back of the tab and click the blade into lockup. It might not be as fast as most EDC deployment methods, but after a small learning curve the process becomes very smooth. While the action is a little heavy for my liking, it’s free of grit or any hitches. Lockup is decent if unexceptional. My Jukebox has a little lateral wiggle if I apply a bit of force, but it’s nothing that bugs me. The liner is a little thin, but it consistently finds the middle of the blade even with light pressure. I wouldn’t hammer on it, but this would be fine for light to moderate use.

As you might have gathered, the blade steel, action, and ergonomics all add up to a knife that I like, but don’t love. In considering what Gerber’s trying to do these days, the Fastball (and Gerber’s custom knife program) is more representative of the company’s potential, and something that moves my personal needle a little more than the Jukebox.

But indulge me in a baseball analogy. If I look at my knives the same way a manager does with pitchers, my Benchmade Bugout is one of my starting “aces.” It will give me a lot of output, look good doing it, and is a good choice for most situations. Oppositely, something like the ESEE Junglas works as a “closer.” It won’t be an everyday sight—much to the contrary, it’s a specialized tool that gets brought in when a specific problem needs to be solved decisively. The Gerber Jukebox, then, is that relief pitcher who’s brought into the middle of the game when your team has a commanding lead. Granted, it might not be as flashy or as effective as another option, but often the job that needs to be done won’t be meaningfully impacted by the limitations of the tool. Additionally, by relying on that tool, you save aces and closers alike from unnecessary wear and tear. 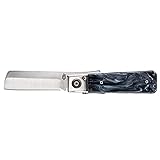 Editor: I recommend purchasing the Gerber Jukebox at BladeHQ or Amazon. Thank you for reading.