Of all the words used to describe Cold Steel knives here on BladeReviews.com, “refined” isn’t at the top of the list. That’s not a metaphor – I literally made a list, and “refined” only appears three times. You’re much more likely to see Cold Steel knives described with adjectives like “strong” (41 times), “large” (39 times; followed closely by “big” at 38), and “comfortable” (26). Buy the AD-10 at BladeHQ

Speaking as a former Cold Steel skeptic, I was unsurprised to find that the AD-10 is indeed strong, large (big), and comfortable. What did surprise me was just how good this knife is. It delivers the essence of Cold Steel, refined. It might be the best knife they’ve ever made. And if you, like me, ever scoffed at Cold Steel’s marketing or rolled your eyes at their product names, read on, because the AD-10 will catch you off guard.

The proportions of this knife are deceptive. Yes, it’s big, but the wide handle, snubnosed blade, and protruding backspacer make it look even bigger – as if there’s another knife trapped in there, bulging through the seams trying to get out. Makes sense, considering the AD-10 is a downscaled version of designer Andrew Demko’s gargantuan 4-Max. Here it is filling out a Spyderco sandwich, between the longer Military and shorter Paramilitary 2: The AD-10’s blade is clearly optimized for strength. The tip is wide, thick, and feels practically unbreakable. It penetrates more like an armor-piercing round than a needle, meaning it’ll get you into just about anything so long as you don’t care what kind of hole you leave behind. Behind the tip, the grind thins out quickly to a relatively thin edge thanks to a nicely executed hollow grind. Don’t let anyone tell you that thick knives can’t slice – the AD-10’s substantial 3.9mm blade stock and deep hollow grind work together like a zipper, holding material apart from the blade after the edge separates it. Compared to a full flat ground knife of similar stock thickness, the AD-10 carves through cardboard with noticeably less friction, powering through the nasty two- and three-ply stuff rather than getting wedged in. There’s no avoiding the laws of physics, however: a hollow grind can only do so much for a knife this thick. It’s graceless in the kitchen, where the tip mashes more than it pierces, and crisp produce is split, not sliced. Then again, the AD-10 isn’t anyone’s idea of a kitchen knife. For more utilitarian cutting it works with surprising agility, despite looking like a wrecking ball. The blade steel, S35VN, has performed well for me. Edge retention has been good; stainlessness, excellent. As for toughness, it did not disappoint. I took the AD-10 on a hike and ended up using it to trim back a bush that had overgrown the trail. A careless chop glanced into a stone, damaging the edge where it hit. Thankfully, the steel was tough enough to roll, not chip, so the damage was easy to sharpen out.

At just over three and a half inches long, I wouldn’t call the blade oversized. The handle, though, is another story. Even if you ignore the extended pommel, it still measures in at 5.25 inches. For perspective, that’s almost as much handle as the Spyderco Military, with about as much blade as the Para 2. Yeah. If you’re someone who obsesses over high blade:handle ratios, this isn’t your knife. To top it off, the AD-10 is bulky, too; easily eclipsing my heretofore thickest knife, the Victorinox Alox Farmer. These comparisons aren’t complaints. Because the AD-10 is the most comfortable folding knife I’ve ever used. Andrew Demko is a master of ergonomics. You’d think a knife with this many finger grooves – plus a front and rear guard – would feel awkward to move around on, but the AD-10’s smooth and deeply sculpted handle isn’t so prescriptive that you feel locked in to any single grip. The pocket clip is wide, polished, and barely noticeable in hand. The lock bar and backspacer leave no palm-pinching voids in the back of the handle. Every edge, every corner is shaped or softened. It all feels very purposeful, allowing you to exert more force with less strain – this is a knife that makes “hard use” feel easier. One ergonomic caveat: the forward finger choil might be a little cramped for thicker fingers, although I didn’t have any issues. The unavoidable problem with a knife this fist-filling is how awkward it is to carry in a pocket. I mean, it’s 6.8 ounces and thicker than a coin purse on laundry day. I can deal with large knives (see my review of the Spyderco Hundred Pacer), but the AD-10 stretches (literally) the capacity of my pockets. If you wanted to carry it in your waistband, you’d probably need to buy bigger pants. Even though it hurts to suggest something so shamefully uncool, your best option might actually be a belt pouch. Still, despite the weight and bulk, I’d pick the AD-10 for my pocket before any of the other Cold Steel folders I’ve owned. The clip – while it could use a little more “ramp” at the lip to help it over thick seams – is an improvement over the too-short, too-stiff, death grip clips I’ve struggled with in the past. And unlike the pocket rasps Cold Steel typically uses for handle scales, the smooth G10 on the AD-10 makes stowing and retrieving the knife a cinch.

At this point, Cold Steel’s Tri-Ad lock needs little introduction – it’s simply one of, if not the strongest locking system on the market today. What impresses me more than its absolute strength is its tolerance for abuse over time. Even if you were to impact it hard enough to deform the lock face, the built-in play around the lock bar pivot preserves solid lockup, by allowing the lock bar to reset itself against the stop pin. It’s clever engineering, but that play in the lock bar can sometimes make the Tri-Ad lock sticky and hard to disengage. Not so here: the AD-10 unlocks cleanly without the need for any break-in. Ambidextrous thumbstuds and glassy smooth Teflon washers make for satisfying deployment, whether you open it slowly or with a quick flick. Closing it back up one-handed is a little counter-intuitive. So long as you don’t pull your fingers away from the heavy falling blade, they’ll safely catch the choil and not the edge, though thicker fingers should proceed with caution. The AD-10 feels like the latest and greatest result of an ongoing evolution at Cold Steel. I can’t pinpoint when it started, exactly, but I started to take notice when they upgraded their blade steel across the board in 2015. Ever since then, it seems like they’ve been taking the cheesy machismo that built the brand and distilling it into impressive products that do more than just tactical wish fulfillment (not that there’s anything wrong with that – I once owned a Rajah 2, after all). The AD-10 doubles down on what Cold Steel have always done well – big, brash, and strong – but doesn’t swagger over the little details. It’s not a knife I can always carry, but definitely one I enjoy using when I do. If your pockets will stretch for it, you won’t find a more capable and comfortable folder at this price point. 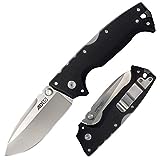 Editor: I recommend purchasing the Cold Steel AD-10 at Amazon or BladeHQ. Please consider that buying anything through any of the links on this website helps support BladeReviews.com, and keeps the site going. As always, any and all support is greatly appreciated. Thank you very much.

Seth Vietti is a musician, writer, and web developer living in Tucson, AZ. After surviving a career in the music industry, Seth co-founded KnifeNews.com in 2015 to share his lifelong passion for knives with other enthusiasts online. These days, he runs KnifeLaws.com - the world's largest directory of knife laws. Follow him on Instagram (@knifelaws) to see what he's cutting with today.