I think it’s safe to say that my reviews rarely court controversy. I’ve never had a “Kershaw Cryo” moment a la Everyday Commentary. For the most part, I pick what I review, and I’ve yet to give a product less than a lukewarm reception. Feedback from readers often reinforces my perspective, and in turn gave me the notion that I knew what most people find attractive. The Citizen Nighthawk dispelled that illusion. From the very start, it received…well, let’s call it a “mixed reception.” The pushback was strong enough that I sought a bit of outside validation from the notorious Andrew Gene. It wasn’t quite as positive as I’d hoped:

To me, if you need the instrumentation then it’s great. Otherwise it’s a wank. All instrument watches worn by people who don’t need them are a wank. Embrace the wank if you like it. Get one. That’s what I think.

Still, it was an oddly comforting sentiment. It may be a wank of watch, but it’s no better or worse than any other wank in my life. Hell, I hear those are good for the prostate. That said, on to the review.

This watch has two weaknesses, and the first of which is how it rides on the wrist. The dimensions for the Nighthawk aren’t at fault, mind: at 41mm wide by 12.5mm thick, it’s smaller than my Seiko Turtle, which is the largest watch I own. Despite being smaller, it doesn’t actually wear as well. It’s not even the angular case that causes discomfort. No, my sole complaint when wearing the Nighthawk is the crown. It’s just longer than it needs to be. Every time your wrist bends backwards the crown will immediately dig into your wrist. While never enough of an issue to dissuade me from wearing the Nighthawk, it certainly wouldn’t be my first choice going to the gym. Much like Benchmade and the axis lock, Citizen and the Eco-Drive are inseparable. Citizen was one of the early pioneers of solar watches, and their R&D department has pushed that particular envelope for decades. The result is a solar-powered quartz watch that reaches full charge in a matter of hours and (when fully charged) lasts 180 days. I’ll admit that it doesn’t have the same panache as a mechanical movement, but to harp on that point would be snobbish to say the least. Practically speaking, it’s an improvement. You trade the sweeping seconds hand for a power reserve and degree of accuracy unheard of in mechanical watches. My Nighthawk runs a mere 15 seconds slow after two months, though it should be noted that I didn’t set the time when I purchased it. It’s entirely possible that it was set incorrectly from the start.

The Nighthawk’s case is quite distinctive. Its industrial, angular lines are evocative of aviation hardware, and the interplay between the wide crystal and the angled dial brings jet turbines to mind. The 3-piece case has held up quite well to everyday wear. My only complaint is that the caseback on models for the U.S. market are etched with the Citizen logo, whereas models for the European and Japanese markets have engraved casebacks. As previously mentioned, the crown is a tad overlong, especially as it sits at 3 o’clock. This is a quartz watch, so you shouldn’t be interacting with the crown as frequently, but it’s functional all the same. The knurling is grippy but not aggressive, and the long crown certainly gives you a great deal of purchase. There is a second crown at 8 o’clock which rotates the slide bezel.

Remember those weaknesses I mentioned? Well, if you haven’t already guessed, the dial is the second. The actual indices are clear enough, with raised columns for every hour but 12 and 6, which are marked with large, raised arabic numerals. A date function is located at 3 o’clock in a stepped window. None of those cause any problems. The real issues arise when you look at the extra functions on the Nighthawk: a GMT dial and a slide rule bezel. Normally a GMT complication takes the shape of an additional hour hand, which is used to track a separate time zone. Citizen took a different approach. On the inside of the dial, there are two arcs, one marked 1-12 in white, the other 13-24 in red. There’s a double sided hand with a red end and a white end (and yes, both are little airplanes: – some kitsch is allowed). You read whichever color matches the hand currently over the numbers. To actually use this function, pull the crown out and rotate it away from you. This advances the primary hour hand without stopping the watch or affecting the secondary hour hands.

While the GMT complication didn’t help the Nighthawk’s legibility issues, the slide rule bezel of the Nighthawk actively exacerbates them. Slide rules are best thought of as analog calculators, and they’re not an uncommon feature on pilot watches. Computers have made them largely obsolete, but then, that’s true of watches in general, so maybe it’s best not to dwell on that topic. I’ll admit that I’ve yet to sit down and learn how to use it, but then again I’m not in flight school either. Here’s a tutorial on using one if you’re so inclined. The Nighthawk comes equipped with a mineral crystal face. It isn’t as glamorous as sapphire crystal, but at this price point that kind of material isn’t really an option. The news isn’t all bad: while sapphire crystal boasts superior scratch resistance, it’s also more prone to shattering than mineral crystal.

Because of the polarizing dial, I wasn’t entirely surprised to find that most folks are drawn to the bracelet. Mesh bracelets aren’t necessarily rare, but I see them more frequently on slimmer, dressier watches. It’s comfortable, flexible, and stands out a bit compared to a standard jubilee or oyster bracelet. Sadly, the lugs hug the case so closely that NATO straps (or similar variations) may not fit, so if you dislike the bracelet, you may be limited to two-piece replacement straps. The Nighthawk’s bracelet (at least this iteration’s) comes equipped with a butterfly clasp. Unlike foldover clasps (which require a bit of fiddling), butterfly clasps are actuated by simultaneously pushing both pushers on the underside of the bracelet. I’ve been impressed so far. It’s simple, secure, and convenient. Still, some might prefer a more traditional clasp. If that’s the case, I suggest the BJ7000-52E. If you can’t tell, the Citizen Nighthawk is a bit of a mixed bag. On one hand, the execution is fantastic: I’d go so far as to say it’s nearly flawless. On the other, some of the design choices leave a lot to be desired, most notably the overlong crown. I can’t heavily criticize the slide rule and GMT functions, as both seem valuable to pilots and heavy travelers, but be aware that they clutter up the dial.

Frankly, I realize that this review – like the Nighthawk itself – is a bit of a wank. Those of you who already liked the Nighthawk won’t be turned off by anything I have to say. Likewise, the vocal detractors of the Nighthawk won’t have a sudden change in taste after reading this review. Personally, I’m glad I picked one up: I won’t be getting rid of it anytime soon, barring unforeseen circumstances. 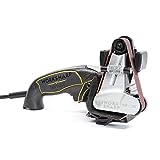 I recommend purchasing the Citizen Nighthawk at Amazon. Please consider that purchasing anything through any of the links on this website helps support BladeReviews.com, and keeps the site going. As always, any and all support is greatly appreciated. Thank you very much.