Last Updated: September 17, 2019
The Boker Pipsqueak is a “little big knife” designed by Neil Blackwood of Blackwood Custom Knives and manufactured by Boker in Solingen, Germany. As an urbanite who primarily carries a knife for utility purposes, I have grown quite fond of smaller EDC blades. In fact, I am perfectly alright with toting around the featherweight Spyderco Dragonfly or the Cold Steel Mini Tuff Lite. I find both these little knives to be unobtrusive, practical, and entirely adequate for my admittedly pedestrian purposes.

Buy the Boker Pipsqueak at BladeHQ

But I must say, the Dragonfly and Tuff Lite don’t particularly excite me from a collector’s standpoint. They are purely functional, and rather spartan offerings. So I think that is what drew me to the Pipsqueak – it’s a little folder with some big balls. The kind of knife that satisfies my craving for titanium and high-end steel, but can be used at the office without raising any eyebrows. It’s a quirky knife, certainly not for everyone, but in my months of carry I have found the Pipsqueak to be a wonderful dichotomy of style and substance. A handsome little bugger that gets the job done. Lets take a closer look.

The Pipsqueak is 6.15″ long, has a 2.625″ blade, and weighs 4.7 ounces. I have found the Pipsqueak to be ideally suited for EDC. It’s small enough to ride in a pocket without any fuss, but is large enough to get some real work done. The weight might be an issue to some, haven’t found it to be a problem personally.

The blade on the Pipsqueak is a stubby drop point design. The first thing you may notice is the very cool two-tone finish. The flats have been given a satin finish while the grinds have what appears to be an acid etched stonewash. Speaking of grinds, you have a pretty high hollow primary grind, a little swedge, and a nicely ground secondary bevel. The knife cuts well thanks to the thin hollow grind and recurve. It’s a very aggressive little blade and any material you feed into it accelerates along the curving edge. My one reservation was that due to the curves this knife would be difficult to sharpen. Thankfully, I was completely wrong. With a little care and a few minutes on a rod style sharpener (I used a Spyderco Sharpmaker) I was able to maintain a hair shaving edge. Boker selected S35VN for the blade, which is a high end stainless designed to be a successor to S30V. I am really impressed with how well this S35VN has performed on the Pipsqueak. The out-of-box edge was extremely sharp, and it held that nice edge for well over a month. Even then it was still fairly sharp, but I wanted to see how the knife sharpened so I touched it up. S35VN takes a very nice edge, and I’ve had no issues with chipping or corrosion either.

The Pipsqueak’s handle is centered around two meaty slabs of titanium, one left bare to serve as a frame lock, and the other covered with a piece of olive green canvas micarta. Riding between the titanium is another piece of micarta serving as a partial backspacer. Like the rest of the knife, I found something really endearing with the way this handle was designed. The titanium is thick and has been given a tumbled finish to match the blade. Everything is nicely finished and feels extremely solid. I also found the ergonomics on the Pipsqueak to be very good. As a lefty my palm butts up against the micarta side of the knife, and it feels quite comfortable. From other reviews I have read the knife is comfortable for righties as well. And despite being a smaller handle I can still get a full grip without issue. Rounding things out is a small run of jimping along the spine that adds a little texture for the thumb. It’s nothing crazy, but for EDC this jimping proves more than adequate. The pocket clip is a folded over piece of steel. The Pipsqeuak is drilled for right side tip-up carry only, but I must confess the handle looks clean without a bunch of extra holes in it. The clip is shaped to mimic the silhouette of the knife. I wasn’t wild about this detail, but again to me it wasn’t a deal-breaker. Clip retention is good, and the knife rides comfortably in pocket. It’s a heavier knife, and the clip does a great job holding it in place.

One of the first things I noted with the Pipsqueak was how smooth the deployment was. The blade glides freely on 2 sets of phosphor bronze and teflon washers, and ambidextrous thumbstuds provide easy access with either hand. The knife is very fun to open, and can be flicked with a thumb or gently pressed into position. The ball detent is ceramic, and it works very well.

The knife makes use of a thick titanium framelock. The lockbar initially locked up very early, and after a few weeks it settled to about 50% lockup – where it remains today. All in all, I have found lockup to be strong. I noticed a little side-to-side play develop as the lock broke in, but I was able to tune it out with the turn of the pivot screw.

The Pipsqueak is a knife not without it’s quirks. The chunky features, dramatic curved blade, and the relatively hefty carry weight all could be seen as potential negatives. But for some reason these quirks only draw me in closer. Naturally, this is a situation where “your mileage may vary” and I totally get that this one may not be everyone’s proverbial cup ‘o tea. But that’s quite alright, part of the fun of collecting knives is finding the stuff that you like, and that you want to carry and enjoy. So if you happen to be a fan of the design, well I whole-heartedly recommend the Boker Pipsqueak. It has served me well as both an EDC and a wonderfully unique pocket knife. 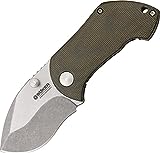 I recommend purchasing the Boker Pipsqueak at Amazon.com or BladeHQ. Thanks for checking out the review.