Last Updated: July 27, 2019
I’m not sure how to put this delicately, so I’ll just come out and say it: Benchmade hasn’t done a whole lot of exciting stuff in 2013, and it has resulted in a lack of reviews on new Benchmade knives. This isn’t necessarily a bad thing, but the lack of cool new stuff to examine makes for boring blogging.

Buy the Benchmade Volli at BladeHQ

One 2013 Benchmade has been on my radar for some time, and that is the Volli. It hasn’t gotten a lot of attention, probably because it appears to be some sort of a rehash between the Griptilian and Barrage, but again that isn’t necessarily a bad thing. And frankly there is a lot to like here. In the time I’ve spent testing out the Volli I’ve found it to be a very functional and practical knife. We sometimes overlook those qualities as the industry focuses more and more on big names and exotic materials, but I still think there is room in many people’s pockets for a robust EDC/tactical knife without a lot of frills or hype.

The Volli runs the gamut from an urban EDC to a “tactical” pocket knife depending on where your needs and preferences lie. For me, it’s more of a nights and weekends knife than a true daily carry, but for many I’m sure it would do well as an EDC. It has a feature set that I would think appeals to the law enforcement / military crowd, and I’m sure Benchmade also had those types of users in mind when they put this knife together.

The drop point blade is clean and simple with a high flat grind, and fine tip. My model comes in a bright satin finish although they do offer a black coated version as well. The grind lines are crisp and the knife came wickedly sharp out of the box. This is a simple drop point pattern but it has been done right.

The blade is S30V, a steel that I haven’t always been a huge fan of despite it’s popularity and billing as a premium knife steel. In practice I’ve found that S30V has a reluctance to take a really fine edge, especially on a couple Spydercos that I own, and I’ve sometimes dismissed it as more trouble than it’s worth. Well, I’m pleased to say that whatever Benchmade did with the S30V on my Volli, they really did it right. This is one of the nicest S30V blades I have owned. The Volli came screaming sharp out of the box, which is always nice, but more importantly I’ve been able to keep that screaming edge with some judicious stropping. The knife has proven itself to be a really capable cutter. As always, I did test this knife thoroughly. I went through a great deal of 1/2″ sissal rope without any problem – it was almost comical how easily it cut through the rope. Eventually the edge slowed down, but I was able to quickly bring it back with my strop. Same went for wood and cardboard – it cut large amounts of both with no problem. This is because of the relatively (2.5mm) thin blade stock and the nice lean grind. 2.5mm isn’t alarmingly thin but many EDC blades (like my Spyderco Sage 1 – also in S30V) comes in at 3mm. While some may find the thinner stock a turn off, I like it because the knife cuts, and it cuts damn well.

The handle of the Volli is G10 over full skelotonized stainless steel liners. Probably the first thing you will notice is the heavy texturing to the handle, but it’s also important to point out that it has a full plastic backspacer and you can’t access the pivot without taking off the display side scale. Construction is sturdy. All the parts line nicely while corner of the handle has been broken to accommodate your hand. There is a small unobtrusive lanyard hole and all the hardware is of the torx variety. Ergonomically, this is a straight forward and practical handle design. Relative to something like the Griptilian this is a thin handle, but there is still plenty there to fill your palm and all the corners are nicely contoured. I found it to be comfortable, even under hard use. There isn’t any jimping, which is fine in my book. I was able to really bear down on the knife when carving and cutting and I didn’t notice any major hotspots. Much like the simple blade shape this is a practical handle, and I found it to largely be a pleasure to work with.

The pocket clip is Benchmade’s classic split arrow clip. This time it has been configured for ambidextrous tip up carry. The aggressive texture to the G10 means this knife will destroy your pockets if you aren’t careful (you will never find me carrying this with slacks), and that may be my greatest gripe. I understand that there is a fine line when designing a knife like this, and you don’t want something that offers no grip at all. Aside from the pant shredding texture the Volli carries well. This is a classic pocket clip and it holds the knife securely and discretely.

The Volli takes advantage of Benchmade’s axis assisted opening technology. It snaps opens quickly with the brush of a thumb. An assisted opening knife is mostly a novelty for me, but I can see the advantage if you are in a line of work where you really need your knife to open. Benchmade included a safety located on the back of the handle. It stays out of the way but can lock the knife in both the open and closed position, a nice feature when you have a tip up carry assisted opening knife. For lockup Benchmade went with their trusty axis lock, a personal favorite. My knife came with a small amount of lateral play, and I had to tweak the pivot by removing the G10 scale. The covered pivot looks nice, but it’s a departure from the otherwise practical design and I’d be remiss to not consider it a problem with the design.

In addition to the axis lock there is a secondary locking mechanism on the spine of the handle. It allows the user to lock the blade in either the open or closed position. It’s not a bad feature to have on a tip-up assisted open knife. It’s unobtrusive and functional. I have to say that after Michael commented on this post (see below) I both de-assisted the knife and I took the secondary lock out. I don’t proclaim to be an expert when it comes to disassembling knives, but I’ve taken down plenty. The Volli was a little tricky to take apart and the whole process took me the better part of a half hour. That said, if you are patient and don’t mind potentially voiding your warranty it shouldn’t be impossible. The knife works just fine without the spring and the safety.

The Volli isn’t a show stopper. It isn’t the latest and greatest. It’s no ZT 0560 or Spyderco Domino as far as the “wow” factor is concerned. But I’m still pleased with the knife and it seems to fill a spot in Benchmade’s catalog. Detractors of the Griptilian’s plastic handles may have finally met their match, and I’m impressed with how nicely the knife cuts and feels in hand. The thinly ground blade is one of the best slicers I’ve handled in recent memory, and the S30V steel performed way better than I’m used to seeing out of S30V.

If I were designing it from scratch I’d tweak a couple things. I’d leave it so the pivot could be readily adjusted, tone back the texture slightly and (if it were me) remove the spring assist. But these are all pretty minor and subjective complaints that may not be relevant to your needs or preferences. While I’m not completely head over heels with the Volli, it is still a very nice knife, and I’d go so far to say that if you are someone looking for a robust folder in the 3.5″ blade category with S30V steel I’d put it above the Zero Tolerance 0350 and say it is very strong competition for the Spyderco Paramilitary 2.

It may not be a runaway blockbuster blade of 2013, but that isn’t because it’s a bad knife, it’s because it has been overshadowed by some very interesting and very adventurous offerings in a very competitive marketplace. If you are in the market for a sturdy high performance folder in S30V with a ~3.5″ blade, then the Volli is well worth your consideration. 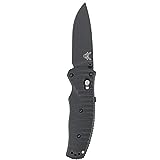 I recommend purchasing the Benchmade Volli at BladeHQ or Amazon. Purchasing anything through any of the links on this website helps support BladeReviews, and keeps the site going. As always, any and all support is greatly appreciated – thank you very much.