Last Updated: August 9, 2019
The SERE 2000 is one of the more iconic folding tactical knives of our time. The knife was originally designed in the 80s by Al Mar and Colonel Nick Rowe for the Army’s SERE (Survival, Evasion, Resistance, Escape) school. The fact that you can even still buy the knife is a testament to the efficacy of the design. As an enthusiast of modern folding knives, I have had my eye on the SERE 2000 for some time. It’s one of those “cornerstone” tactical knives like the Paramilitary 2 and Benchmade 710 that I feel almost obligated to try (twist my arm).

So why the hell would you buy the miniature version? Good question. I guess if you want “tactical” but are forced to be a little more “practical” then the Mini SERE 2000 (or MS2K) could be the knife for you. This is taboo in some circles, kind of like buying a 4 door Porsche. But I’m a sucker for compromise, and I got a good deal on this MS2K, so that’s why the mini version is the subject of today’s review.

The MS2K has an overall length of 7″, a 3″ blade, and weighs 3.5 ounces. Compare that with the full size SERE 2000 with an overall length of 8.5″, a 3.6″ blade, and weighing in at 6 ounces. I have enjoyed the Mini SERE 2000 as an every day carry (EDC). Having never attended SERE school, I couldn’t really tell you the merits of this folder in a Survival, Evasion, Resistance, or even an Escape capacity. I helped a couple hot dogs escape from their package the other weekend with the MS2K, if that counts for anything.

The SERE 2000 has a modified drop point / spear point blade with a mid height flat grind and a large flat ground swedge. This is a classic Al Mar profile that has shown up in a variety of their offerings, including the Eagle and Falcon lines. This simple blade shape is a good all round performer, combining excellent piercing capability with strength and slicing performance. Al Mar offers the blade with a satin finish or a black ceramic coating. I really like my satin finished blade – it has been beautifully done with crisp grind lines, an even finish, and a neatly applied edge. The SERE 2000 comes in VG-10 blade steel. This was probably a great choice when the knife came out 20 years ago, but is only OK by today’s standards. These days there are a number of higher end steels, especially at the price point the MS2 is offered at. The SERE 2000 is made for Al Mar by Moki Knives in Japan, and VG-10 is made in Japan, so that makes sense.

Practically speaking, the knife is capable of getting screaming sharp and it slices well. The tip strikes a nice balance between strength and precision. VG10 is very easy to maintain. I tend to strop my MS2K and I occasionally run it on the fine stones of my Sharpmaker. I have had zero issues with corrosion or chipping. However, I would not complain if they upgraded the steel to something more wear resistant, especially given the price of this knife.

The SERE 2000 features a no-nonsense handle design with black, O.D. green, or digi-cam G10 handle scales over full steel liners with a combination of stand offs and a small stainless steel backspacer. The handle is immaculate. The finish work is seamless, replete with satin hardware and lightly chamfered edges. I can’t feel a single crack or seam as I run my thumb over the backspacer that bridges the G10 scales and steel liners – a hallmark of excellent finish work and a close attention to detail. Although the liners are not skeletonized, the knife feels light and reasonable for its size. All told I am very impressed with the build quality of the handle. The MS2K was originally designed to be a much larger knife. I am guessing the mini version was an afterthought to appeal to a broader audience, and it is simply a scaled down version of the full size SERE 2000. I am pleased to report that the ergonomics of this design translate well to a smaller knife – another testament to the universal appeal of the original SERE 2000.

There is just enough room for me to get a full four finger grip, and my thumb perches nicely on the spine of the blade. This is a relatively thick knife, and it fills the hand. The chamfered edges are extremely comfortable and melt into your skin. The flared handle contributes to the MS2K’s signature profile, and also helps ensure your fingers don’t slide around on the knife. There is no jimping, but the thumb perches nicely on the spine of the blade. The knife is also comfortable in a reverse grip. I found this to be a good working knife, and had no real issues with hot spots even after a couple intense encounters with rope and cardboard. This handle ascribes to a KISS (Keep It Simple, Stupid) mantra, and the end user is all the better for it. The deep carry pocket clip has been given a glossy black coating. It allows for ambidextrous tip up carry. I like this relatively discrete clip design. It is a really tight clip and butts up to high traction G10. There is definite potential for pocket tearing, so keep that in mind. The clip provides very good retention and generally functions well. Being a knife with a relatively thick blade, full steel liners, and thick G10 handle scales, it’s a little thick in the pocket. Still, the knife carried fine for me, and I didn’t really notice it. The Mini SERE 2000 has ambidextrous thumb studs, teflon washers, and a liner lock. The thumb studs are accessible on both sides of the handle, but the knife is designed primarily for right hand users. The teflon washers make it impossible to flick open, but it’s a very smooth knife. The liner lock engages early and securely. Like my Sage 1, the MS2K makes a distinctive “chirp” as you snap the blade into the open position. There is no blade play in any direction at all. Blade centering isn’t perfect on my knife, but it’s close.

I also like how the tang of the blade has been rounded off at the spine, so the knife looks just as good closed as it does open. It’s this attention to detail in the design and execution of the knife that gets me excited about the SERE 2000.

When it comes down to my final thoughts on the Mini SERE 2000, I am a little conflicted. On one hand it’s a beautiful knife. It’s well made, balanced, with decent materials, and it’s very practical. It is an excellent knife. But on the other hand we are talking about a Japanese linerlock with G10 handles and VG10 steel with a retail price at $200+. For $150 I would recommend it without reservation. But at an actual retail of $200+ it is much harder to give this the fullest of endorsements. This isn’t because the SERE 2000 is a bad knife – it isn’t. It’s a wonderful knife. My problem with it is that I think that there is more out there at a better value.

Case in point, the Spyderco Sage 1 is another linerlock folder with 3″ blade, similar fit and finish (maybe not quite as good, but close), and better blade steel. The Spyderco Caly 3 is a beautiful Japanese folder with laminated ZDP 189 blade, real carbon fiber handle scales, and equally impressive fit and finish to the MS2k. At nearly twice the price of both the Sage 1 and Caly 3, I have a real hard time recommending the SERE 2000 carte blanche. It’s still a beautiful knife, just spendy.

It is also worth noting that the full size SERE 2000 is only a couple dollars more than the Mini. It might also be easier to justify spending the money on the full size version, especially if you are going to rely on it every day as a member of the military or law enforcement.

If you can get past the price the SERE 2000 is worth acquiring. It’s a timeless folding tactical knife, and fans of the genre owe it to themselves to at least check it out eventually. 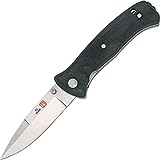 I recommend purchasing the Mini SERE 2000 at Amazon and BladeHQ. Please consider that purchasing anything through any of the links on this website helps support BladeReviews.com, and keeps the site going. As always, any and all support is greatly appreciated. Thank you very much.