The Swiss Army Knife is likely to the most well-known knife in the world. Something about its name, distinctive red handle, and the fact it was one of the first successful multi-tools has cemented its place into our cultural collective. Swiss Army Knife is even a misnomer because American GI’s couldn’t properly pronounce the German phrase for Officer’s Knife. However, the new name stuck. The Swiss Army knife became an icon that went to the moon, gave MacGyver a favorite tool, and became a Boy Scout’s best friend. Buy the Victorinox Hiker at BladeHQ

The Hiker is a mid-size Swiss Army Knife with a long and short blade. The long blades is roughly 2.5 inches long and the short blade is 1.5 inches long. The handle is 3.5 inches long if you just measure the handle, with the lanyard attachment ring it’s about 4 inches total. The blade is a drop point that’s not exceptionally pointy. Pointy enough to poke things and to open up cardboard, paper, and plastics. There is no lock on this model and this is a traditional slipjoint style knife. The blade has a nice fat belly to it for cutting deep with a short blade. Perfect for cutting up oranges nice and clean during a picnic, or cutting through thin rope and cordage. It’s a blade well suited for 99% of the tasks I put knives through. 95% when hunting season is in play.

Victorinox doesn’t advertise its steel type, but it’s nothing fancy. On a sub 30 dollar multi-tool, you can’t expect 154CM. The blade can get pretty darn sharp and it’s also really easy to sharpen. You can get it licked up in about 3 swipes per side on a wet stone. The downside is that it gets dull fast. Not like after a day of work, but like an hour’s worth or even less. It dulls quick, one day while stocking the office printers I dulled it cutting through the plastic wrap around the paper boxes and the plastic straps holding their lids on. If you carry a pocket sharpener you can quickly get your edge back though. You can also swap to the smaller blade and keep going should the larger get dull. Corrosion wise the knife holds up. Summers in Florida are no joke and they make me sweat a ton. Anything in my jeans pockets is going to be exposed to sweat, and this knife has never rusted. Living in a coastal air the salt is in the air and still it’s never seen a lick of the red death.

The Hiker is a small, but a somewhat fat knife. The total length of the handle is 3.5 inches, but it’s also a little over half an inch thick. It’s thick because have to contain 7 folding tools, a tweezer, and a toothpick. Five tools fold in the front and two in the rear. In total, you get three different drivers, a can opener, a bottle opener, a saw, a reamer, and the aforementioned tweezers and toothpick. While thick, the iconic, red plastic grip scales round it out for a comfortable overall grip.

The grip allows you to employ every tool comfortably. It’s thick and supportive nature does make it easy to work with and avoid pain and fatigue when doing something that takes time, like opening a can. As a side note, I’ve only used it once to open a can of Hormel chili and it works, just slowly. That thick handle is a must-have for opening cans or using any other leverage-based actions. It’s thick and isn’t going to bend, break, or slip. The grip is texture free and doesn’t necessarily grip your hand. If your hands are wet you may not be able to keep a great grip when doing heavy work. While the tools all stick out just a hair from the handle I don’t find their presence uncomfortable when gripping the Hiker. My only discomfort is that key chain attachment piece hitting my pinky and annoying me when I use the blade.

The Hiker is a very light tool and only weighs 2.7 ounces. I often forget which pocket I put it in because I can hardly feel it. The smooth handles certainly make a comfortable to carry knife since nothing pokes or rubs your leg throughout the day. The slipjoint system makes sure the tools and blades all stay in the handle until you force them out. There is never a worry of a tool or blade deploying in your pocket. The tools are all relatively easy to pull out, but you will need both hands to do so. Once a tool or blade is out it takes a fair bit of force to put it back. However, you can close the tool with a single hand. Many of the tools are combination types and the lock-up and deployment work just as well when you are opening a can as it does when driving a screw.

The Victorinox Hiker is a handy little knife for everyday carry or the occasional trip to the woods. This little Swiss Army knife packs a ton of capable tools in it’s small and easy to use package. The Hiker is also a great choice for keeping a knife in a bug out bag, or in a car in case of emergency. It covers all your basics whilst still being relatively cheap and affordable.

It could also be a great choice for a young boy or girl responsible enough to own a knife. The Hiker is the absolute last knife many would compare to a weapon, and it’s short blades and lack of a lock ensures it’s legal across the board. Additionally, the somewhat dull point and easily dulled blade limits a young person’s ability to hurt themselves. The need for a good fresh sharpening will also hone their skills with a whetstone.

Whatever reason you choose the Hiker you can know that it’s a great knife at a low price. 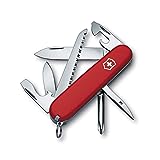 Editor: I recommend buying the Victorinox Hiker at BladeHQ or Amazon. Thank you for reading.