The Spyderco Matriarch’s predecessor, the Civilian, carries a somewhat curious warning. As the company writes on the knife’s product webpage, “Because of its distinctly specialized features it is not intended or designed for general utility or everyday use.” Reading this and knowing nothing about the Civilian, the layperson might wonder why a consumer might spend upwards of $250 on a knife that he doesn’t plan to use much—if ever. But if said layperson were to lay eyes on the deployed blade, an “ah-ha” realization would follow swiftly thereafter. Buy the Spyderco Matriarch 2 at BladeHQ
Buy on Amazon

In essence, the Spyderco Civilian is a pocket velociraptor claw. It has a thin profile and aggressive serrations to rip through clothing and soft tissue. Make no bones about it: the Civilian is explicitly for self-defense against human assailants. Designed in the 1990s for law enforcement officers who couldn’t carry a gun in certain situations, it is a brutally effective “second best” option that can be wielded by an inexperienced user to disable a combatant as a matter of last resort.

The Civilian, however, suffers a few well-known drawbacks. First, the tip is legendarily fragile (probably the reason for Spyderco’s warning not to use it outside of dire circumstances). Second, and perhaps more importantly: it’s expensive at MSRP, but combine that with limited production and a demand that never seems to abate, and it’s not uncommon to see them sell north of $300.

Enter the Matriarch II. If not a direct replacement for the Civilian, the Matriarch II retains the same purpose-built design of the Civilian at about half the cost. Some might hear “half price” and wonder if the Matriarch II is an inferior copy or an exercise in cutting as many corners as possible. Much to the contrary, the Matriarch is a knife that adds enough features that I’d consider it an improvement over its infamous big brother.

Let’s not bury the lede: The Matriarch II gives you 3.57” of a “reverse-S” serrated blade, and a hollow, chisel-shaped grind further helps the knife to cut and slash. The reason for that “S” shape, incidentally, is that any kind of material (organic or inorganic) will be naturally directed from the tip into the hollow of the blade during a natural arc of travel. It’s a scary one-two. The thin tip digs in deep, and the remainder of the blade saws and cuts to extricate itself as the user pulls away. In direct comparison to the blade of the Civilian, the Matriarch II has about a half-inch less of length to work with and a more robust tip. From Spyderco’s perspective, this likely cuts down on the number of broken knives returned for service while not losing hardly anything by way of self-defense effectiveness. It also means that the Matriarch II is more at home in an EDC capacity, where that last eighth-inch of tip can be used to dig into tape and envelope seams. Even given the changes to the profile, you have to look far and wide to find something more intimidating.

As for the rest of the knife, the Matriarch II mates its S-curve blade into just under 5” of handle and a weight of about 3.5 ounces. At only .44 inches thick, the Matriarch II is deceptively thin and light. As such, it easily checks that most coveted of boxes for any self-defense tool: you can carry it all day and forget it’s even there. As you’ll notice from the photo, where it’s nestled between Spyderco’s Para 2 and Ontario’s Rat II, the Matriarch II offers significantly more length. However, that extra length is unnoticeable in most pockets and it’s a far flatter carry than either of the accompanying EDC stalwarts.

One of the biggest factors that differentiates the Matriarch II from the Civilian is the use of fiberglass-reinforced nylon (FRN) over G10. Don’t think of this as a downgrade. In my opinion, the square texture Spyderco uses on its FRN is one of the grippiest and best in the business. This absolutely will not slip out of the hand, and the finger grooves further help the knife to stay anchored. The ergonomics are quite interesting. The Matriarch II shares the same body and construction as the fourth-generation Endura, differing only in the blade itself. Never having owned or held an Endura, this was altogether new to me.

Basically, there are two good grip options. With the thumb placed on the back of the blade, you have more control over the tip and an extremely secure grip. However, one can also align the middle finger in the finger groove lower down the knife and place the thumb along the grooves on the back of the handle, permitting about another inch of reach. Normally I look for a more pronounced index finger groove or some kind of guard on a self-defense knife. Here it’s a total non-issue. The Matriarch II is absolutely not made for making push cuts. If the blade stops on anything solid, it’s going to be pulled out and away from the hand during any kind of cutting task. Ergonomically, the handle is perfect for the intended use. Onto the pocket clip. The tip-up carry design exposes about a full inch of handle, so people will see you have a knife if they’re looking. Fortunately, the aftermarket comes to the rescue: since this is again identical to the Endura 4, a variety of deep carry clips are available, such as those available from Lynch Northwest or MXG Gear.

The Matriarch II’s “wave” opener, licensed from Emerson and incorporated here, is an undeniable upgrade over the original Civilian model. As the knife is pulled out of the pocket, the wave protrusion hooks into the fabric of your pants and basically deploys itself. I’ve read about this several times, but this was actually the first knife I’ve owned to actually have the feature. I’ll say this: it’s hard not to pull this knife out of the pocket without the blade kicking out. It is the fastest deployment system on a folder, bar none. You will want to be very careful when removing this from your pocket at the end of the day, lest you get bit or rip a hole in your jeans. I can only reliably get the knife out of my pocket in the folded position by holding the blade shut against the handle throughout the draw motion. This is an annoyance on a utilitarian EDC, but a welcome feature on a dedicated self-defense tool. If you need the Matriarch II, you will likely need it quickly.

Fortunately, the ease of deployment with the wave counteracts the biggest flaw of the Matriarch II: from the factory, the action is stiff as all get-out. This is a criticism I’ve heard leveled at a number of Spyderco’s back-lock designs, but those used to handling a Tenacious or a Paramilitary of any kind are in for a rude awakening when they try to middle finger flick this thing. The thumb hole is functional, but only in combination with an aggressive, do it like you mean it wrist snap. The blade locks up bank-vault tough and is perfectly centered, but boy howdy does it require some force to overcome the lock bar tension, especially right out of the box. Again, this knife deploys fine with gross muscle movements, but it does not take kindly to the kinds of fine motor control manipulations that make a knife fidget friendly. Perhaps it wants you to really know that this is a tool, not a toy. The tradeoff to the stiff action is faultless centering and lockup. Deployed, the Matriarch II feels very much like a fixed blade, and I have utter confidence in the action’s strength.

There’s often ample overlap between gun people and knife people, and it’s by no means accidental. I would wager that most of the members of either group have spent some time musing about the harsh realities of defending life and limb and at some point came to the conclusion that some options are better than others. The Matriarch II is the most gun-like knife I’ve yet to come across. It’s the easiest crossover knife to convert someone who carries into the world of folding blades, and it’s a design that necessitates the same kind of respect and caution one would give to a loaded firearm. My desk drawer is filled with a lot of designs that are quirky and fun and I happily screw around with them. The Matriarch II is not one of those knives.

At the end of the day, and given the primary use of a knife like this, you’ll know if this is for you or not. And if you do need to draw the Matriarch II in defense of life and limb, may God help the poor son of a bitch who’s on the other end of it. 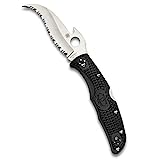 Editor: I recommend purchasing the Matriarch 2 at BladeHQ or Amazon. Thank you for reading.