At first, nothing about the Spyderco Hundred Pacer appealed to me. For someone intent on wringing maximum utility from every inch, every ounce, and every dollar’s worth of blade, the Hundred Pacer seems absurd: too big, too heavy, and too expensive. It’s also… weird. Impressively weird, even for Spyderco, whose catalog is persistently peppered with odd and ugly ducklings. I guess it’s a good thing I had a chance to handle this odd and imposing design in person before buying one, otherwise I would have almost certainly missed out on one of the most useful and interesting knives I’ve carried this year.

The Hundred Pacer is named after a venomous snake, a Taiwanese viper supposedly so deadly that – according to local folklore – whoever suffers its venomous bite will stagger just one hundred paces away before dropping dead. The name isn’t the only thing designer Jonny Liao borrowed from the snake; the knife’s blade shape is inspired by its characteristically upturned snout, and the two-toned texture in the G-10 handle is inspired by the rhomboid pattern of brown and tan scales running down its back.

The Hundred Pacer is such an oddly proportioned design that it’s hard to get a sense of this knife’s scale from pictures alone. Comparisons can help – here it is against the Spyderco Military family: While it may be shorter overall than the full-sized Military, the Hundred Pacer manages to fit in a bit more edge thanks to an efficient use of handle space. The knife feels substantial, weighing in at just over five ounces, but given its sheer bulk it doesn’t feel disproportionate.

It’s hard to overstate just how broad the blade of the Hundred Pacer actually is. For a folding knife, it’s downright gratuitous: at its widest point, the blade of the Hundred Pacer is just a few millimeters shy of my classic Victorinox 8 inch chef’s knife. In use, however, it feels purposeful; intuitive, even. The edge begins below the handle, affording it near full-length contact against a cutting board. It slopes steadily from heel to point in a single uninterrupted arc, slicing aggressively but predictably, without abrupt changes in geometry that can cause cuts to push or pull away. The tip sits just above the centerline of the knife and feels precise and easy to control. And the extra-wide flat ground blade, coupled with an acute distal taper, makes for startlingly good cutting performance. I have observed that a knife with good blade geometry will continue to cut comfortably through all but the most delicate materials even after the edge has dulled. Long after the Hundred Pacer had lost its hair-shaving sharpness from cutting in the kitchen, at the fireplace, and in front of the recycling bin, it continued to perform well.

No doubt Spyderco’s choice of blade steel, CTS-XHP, played a significant role here, too. It is said to be an advanced, stainless version of D2. I can’t speak to the science behind the alloy, but after more than a year of use I can say it has become a personal favorite for its well-balanced combination of good corrosion resistance, excellent edge retention, and ease of sharpening. It plays nicely with my cheap sharpening stones, polishes well, and seems to take a fine edge easier and hold it noticeably longer than comparable industry favorites S30V and S35VN.

In hand, the Hundred Pacer feels practically paleolithic, a fistful of G10 fit for a neanderthal’s fist. There’s plenty of room on the handle to accommodate different grips, but the hump above the pivot tends to push the hand away, either back on the handle for a natural grip: or forward, with the thumb nestling down onto the sloped spine of the blade to apply pressure directly into a cut: Both grips are useful and comfortable, but more often than not (and especially when working on a cutting board) I find myself using the knife in a pinch grip. The snakeskin pattern milled into the G10 is attractive and substantially grippy, even when wet. Compared to the typical peel-ply stuff, it has a variegated, organic feel. And mercifully, Spyderco have opted to leave a patch of the handle smooth under the clip so the texture doesn’t gnaw away at your pockets.

When you need to apply some force, it’s nice to have a handle that your hand can stretch out on. However, there are some ergonomic drawbacks to such a broad, flat handle. Tasks that require deft rotation of the knife in the hand (e.g. peeling small fruit) are a little awkward, and the bulbous rear end of the knife can feel oversized in some grips. Perhaps the biggest drawback of all is how the knife carries. Despite being equipped with Spyderco’s deep carry wire clip – a minimal, functional design that on any other knife I might call discreet – the Hundred Pacer carries… conspicuously. It dominates pocket space like a limo dominates curbside parking. The knife starts wide at the clip and gets even wider around the pivot, so the experience of reaching past it for something else in your pocket ranges from awkward to impossible. Thankfully, the clip is always cooperative. Once you cede control of your pocket over to the Hundred Pacer, getting the knife into and out of it is thoughtless; a real testament to the utility of Spyderco’s wire clip design.

Because most of the mass in the Hundred Pacer’s blade is centered around the pivot, flicking it open doesn’t have the weighty, wrist-snapping feel you might expect from such a big blade. Its unusual kinetics take a little getting used to, but thanks to generous access to the thumb hole and a firm – but not hard – detent, one-handed deployment is reliable whether you want to open it slow and sure, flick it out with your thumb, or “spydieflick” it with your middle finger. The pivot turns fluidly on robustly thick phosphor bronze washers. The nested liner lock has been drama-free since day one, providing secure engagement with the blade at exactly the same spot today as it did when I first opened the knife. Unlocking it is simple, and more importantly, safe: unless you deliberately move your thumb away from the lockbar release cutout, there’s no way for the blade to cut your finger while closing. It almost goes without saying, but the Hundred Pacer won’t be for everyone. Even for those it does appeal to, I suspect that its price ($234 on BladeHQ as of December 2018) makes it easy to choose something else. If this knife was under $200, I think it would be a much more compelling buy.

That said, if I lost my Hundred Pacer tomorrow I would not hesitate to replace it. There are knives that carry more discreetly (most of them), but in use, the Hundred Pacer might be the best all-rounder I’ve ever owned. It’s a superlative slicer, but it still has enough rigidity at the tip and strength behind the edge to handle forceful stabs and torquey cuts. The ergonomics on a cutting board are a huge practical advantage – when I expect to be cooking in an unfamiliar kitchen, I bring the Hundred Pacer.

It’s perfect for long trips away from home – or just long days – when it can flex fluently from pocket knife, to work knife, to kitchen knife. Just don’t forget to clean it in-between. 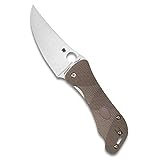 Editor: I recommend purchasing the Spyderco Hundred Pacer at Amazon or BladeHQ.