I suspect that the Smith’s Pocket Pal has fallen into the shopping basket of many an unassuming knife collector. For starters, at under $10 the barrier to entry is low. And knife sharpening can be intimidating to some, so the promise of easy, trouble free knife sharpening probably also has its draw. And then there is the size. It’s smaller than most closed folding knives, and lives up to its namesake. At least somewhat. It’s pocketable for sure, but is it worth pocketing? I have had strong apprehension to pull sharpening systems for a long time now. The idea of dragging a knife through a channel of carbide bits never appealed to me. Fundamentally I didn’t think these kinds of sharpeners worked. Traditionally, when you sharpen a knife you push the edge across your sharpening material, as if you were cutting into it. That makes sense, because in effect you are wearing steel away, refining and polishing the edge. You don’t drag your blade through the sharpening medium like some sort of bizarre prison gang indoctrination.

Yet as I have tried to flesh out the sharpening section of the website I realized that I couldn’t just ignore the humble sub $10 pull sharpener. These are too popular to ignore. I had to buy one, and try one, and face all of my fears and skepticism about this style of sharpener.

If anything I needed to do this in order to tell you that the Pocket Pal is total crap. That these kinds of sharpeners don’t work. That I was right. But maybe I was wrong.

This kind of sharpener is sold by many different manufacturers. Lansky offers their similar BladeMedic, and they make even smaller keychain versions, but this Smith’s model is arguably the most popular. The PP1 features 2 sets of pull through sharpeners, the coarse carbide sharpener, and the “fine” ceramic sharpener. There is also a tapered diamond impregnated rod sharpener. This is for sharpening serrations or possibly freehand sharpening.

To test out the PP1 I pulled out some of my least expensive knives. There is no way I was going to put one of my $50+ folders on this thing. I reached for a well worn Alox Cadet and my Ka-Bar Dozier Hunter. These are both pretty beat up, feature soft steel, and retail for around $20. I was OK with potentially sacrificing them to the sharpening gods. I dulled these knives by dragging them along one of the stones on my SharpMaker. It took a few passes, but I was able to dull the blades to the point where they would not cut paper.

I then attempted to breathe new life into the edge of my Alox Cadet. I started on the coarse side, lightly passing the blade though the sharpener a few times. The first passes offered some resistance, but after a couple rounds I felt the blade pull through a little easier. I then turned to the fine ceramic stones. Again, I made gentle passes through the fine channel, slowly drawing the blade over the ceramic stones and using less pressure as I went along. I gave it a good 10 passes. At this point I was ready to test my results.

I actually got this knife to cleanly cut through post-it note paper using the Pocket Pal. It wasn’t quite push cutting, but it wasn’t tearing either. It wouldn’t shave hair off my arm, but it would cut open an envelope. I was surprised. I didn’t expect this thing to do much of anything, so it certainly exceeded my low expectations. I’d be curious to see what this edge looked under a microscope. Actually, I’d rather not know. After the Cadet I turned to my Ka-Bar Dozier Folding Hunter. This is a thicker blade, and it’s AUS-8 steel which is presumably a little harder than what comes on your standard SAK. Again I ran the knife through the PP1, and again I ended up with something that cut paper. The end result wasn’t incredibly sharp, but it was an improvement over the initial edge. It was completely dull before, and after a minute or so with the PP1 I could cut some things.

Finally, I sacked up and pulled out my Spyderco Sage 1. Originally, I was not going to do this. But after seeing how the Pocket Pal kinda works with soft steel, I wanted to test it out on something harder.

The Sage 1 comes in S30V. S30V isn’t the hardest steel ever, but it’s a significant step above AUS-8 and whatever Victorinox uses. It can be challenging to sharpen at times, so I thought it would be a good test. I blunted the edge of my Sage and then worked it through the coarse and fine settings on the Smith’s. The end result wasn’t as good as I was able to achieve with the Cadet or Folding Hunter. It kinda cut paper. After a few passes on my Sharpmaker fine rods I was able to get the Sage back to cleanly cutting paper. Based on my experience the Pocket Pal won’t work on harder steels. Although I am still not much of a fan of this style of knife sharpener, I have to admit that it has its place. I think if you find yourself in an emergency situation with no other sharpener, and have an inexpensive knife with relatively soft steel, then the PP1 is better than nothing. That said, I’d reach for the bottom of a coffee mug before subjecting any of my high end knives to a pull sharpener. So I still am not a huge fan, but I acknowledge that for under $10 it may not hurt to have one of these tucked away in a tackle box, glove compartment, or back pack. And if you have gas station knives then who cares. Use this thing if you want to.

If you are new to knives and are looking for a quality sharpener, I would suggest the Sharpmaker. If the Sharpmaker is too expensive, then I’d choose a set of Crock Sticks (review coming soon) over the PP1. I would not recommend this as a primary sharpener or for higher end knives.

Still, the PP1 has some merit as an inexpensive field sharpener for inexpensive knives. Beyond that I would probably pass. 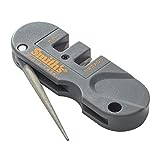 I recommend purchasing the PP1 at Amazon. Please consider that purchasing anything through any of the links on this website helps support BladeReviews.com, and keeps the site going. As always, any and all support is greatly appreciated. Thank you very much.