Seiko is easily one of my favorite watch companies in business currently. They are one of the few manufacturers that holds the illustrious distinction of being entirely in-house. Everything from growing their own quartz crystals to making their own o-rings. That’s a distinction that is worth noting. One of my newer Seiko watches is the Limited Edition SRPB009, or as some call it “The Blue Lagoon Samurai.” Seiko’s original Samurai came out in 2004 only to be discontinued a couple years later. It was originally made in Titanium and then later in some stainless steel models, but they always fit in a weird spot in the Seiko diver lineup and thus the reason Seiko didn’t carry them longer. This was all until earlier this year, when they announced they were reviving the Samurai, this time in steel and a couple different color ways. Before we get into that let’s go over some specs:

The Samurai is a big watch. It wears big, feels big, and looks big. This isn’t necessarily a bad thing however. I have a 7.25” wrist and it fits me really nicely, I think this is largely due (as always) to the case height. The case itself is wide, with a wide bracelet lug, but it doesn’t stick up from your wrist like other large watches do when you wear them. The lugs descend from the case in such a way to “hug” your wrist, honestly the first word that pops into my head when I look at it, is “pancaking,” it allows the whole watch (especially when worn on the bracelet) to wrap around your wrist instead of sit on top. It’s a little abstract to try and explain but it amounts to the watch wearing very well in spite of it’s actual case size. I think the case of the Samurai is the biggest thing that sets it apart from other Prospex diver offerings. The lugs are very angular, almost pyramid-y descending down abruptly from case. All the surfaces of the watch are brushed apart from some minor polished details on the non-crown side. The crown is also another feature on the Samurai that sets it apart from other Seikos, it’s large, knurled, and sits at 3 o’clock. Most prospex divers have their crowns at 4, and only have serrations on the crowns instead of the actual knurling. The SRPB009 runs on the Seiko 4R35 movement, which essentially is the same movement that the new turtle reissues are using with the exception that that day complications is redacted. Ideally I would have liked the Sumo movement (6R15) with it’s longer power reserve and slightly more proven track record, but honestly mine is running around +5s a day, that’s pretty hard to complain about in a ~$500 watch.

Okay, the bezel on this watch is complete fire. It’s dark blue with a light blue accent from noon to the 15min counter. The edges are knurled offering great grip at the noon and six o’clock position allowing you to turn it easily. You are sort of limited to only gripping it in those two positions, there isn’t clearance around the sides of the watch to actually turn the bezel. The dial is a sunburst blue with applied markers for the hours. There are small yellow accents on the quarter hours chapter ring, these match up with the yellow tip of the seconds hand. The hands are lumed with the same proprietary LumiBrite compound that Seiko uses. It’s incredible… if you left this watch on your nightstand it could keep you awake at night.

Lastly the date window sits at 3 o’clock, the date wheel is white with black text on it. Conceptually I’d think this would clash with the overall aesthetic of the watch, but it blends in nicely. Overall I think it’s important to take a second and comment on how the the dial and bezel of the Blue Lagoon are the elements that make it THE Blue Lagoon. There are several other color combinations available in the new Samurai, including a Pepsi and all black, so if for some (weird) reason the blue doesn’t match your curtains you could opt for a different version.

Okay, and the crystal… I feel like this is where Seikos catch a lot of heat. They used a flat hardlex crystal. I have scratched Hardlex in the passed (dunno how), but this one sits down below the bezel and is relatively protected. You’d really have to try to damage it. Seiko isn’t known for their quality bracelets. The Samurai bracelet however is pretty decent. It has some cool polished accents on the center links without having the entire center link polished. There’s a nice diving extension to the clasp if you require it. The biggest criticism I think I could give it, is just that overall it’s sorta, “jangly,” there is a definite rattle to it when you wear it, but apart from that I don’t mind it. The end-links are really cool on this particular one, they fit tight to the case, and really accent the angular features of the Samurai itself. I’ve owned a bunch of Prospex Seikos. I’ve had two MM300’s, couple Tunas, Sumo, Turtles, etc. The Samurai is a really cool piece in contrast to Seiko’s other offerings. I think the casework, and dial choices are just different enough to set them apart from the rest of the Prospex line without making them seem detached entirely.

The Blue Lagoon specifically is a striking piece on the wrist, with great lume, a proven and dependable movement, at a price point that should fit most people’s budget if they’re looking for a nice “sub-$1k” watch. 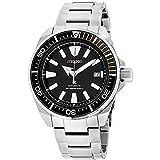 I recommend purchasing the Seiko Samurai at Amazon.