I was at a gun show outside New Orleans when I first saw the Schrade Extreme Survival Assisted Out The Front (OTF). I think I said something like “Dang that is COOL” when I first shot the blade out the front of the knife. 5 minutes and $35 later the OTF was heading home with me. I’ll be the first to admit that sometimes I buy knives just because I plain think they are cool. Despite getting tons of “abuse” opening envelopes and the occasional cardboard box, this little assisted opening number by Schrade was definitely in the cool category. I never intended to use it hard, and I never have. You know what? That’s OK. In fact, I think it’s more than OK to buy a knife because it’s cool. A lot of enjoyment I get out of collecting knives is simply playing around with them. It’s safe to say I’ve had plenty of time to play with this one, and now it’s time to get to work and write a review.

This knife is actually a pretty good size for a EDC blade. It has a 3″ blade with a 4″ handle. At 4.8 ounces it might be a little on the heavy side, but this isn’t your typical folder and the weight seems justified.

The blade is made out of Krupp 4116 stainless steel. 4116 is a bit of a departure from what Scrhade uses for a lot of their knives (440C stainless steel). 4116 is fine grained German steel made by the TyssenKrupp Company. This kind of steel is often used as a surgical steel and is known for it’s corrosion resistance, hardness and edge retention. I’ve found it to be a better at edge retention than 440C and it is a very hard steel. This is a high quality steel more than adequate for the basic tasks I’ve thrown at the Schrade OTF.

This knife comes in a variety of blade shapes. I chose the plain tanto edge for mine, but I’ve noticed it carried in a drop point configuration as well as partially serrated options. The blade is nice and sharp and comes with a gun metal gray aluminum nitride coating which gives the knife a nice tactical look to it. The way this knife works, is that there is a thumbslide at the base of the handle that you push forward on. When you push it forward a little the spring engages and assists the knife open. I wouldn’t call this a “hair trigger” it does involve a little force to get it going. Once it does engage the knife snaps open very quickly. Keep in mind this knife is different from a full on automatic knife in that the assisted knife is legal to carry in many states. (The main functional difference between the 2 types of knives is that an assisted knife requires a little more work on your part to get it open, an automatic knife opens at the touch of the button and is illegal to carry in most states).

The spring mechanism on this knife is very nice. It shoots the blade out very quickly with a nice satisfying click and then it locks up tightly. With this kind of knife you will get a little blade play due to the nature of the design, but it’s really not bad with this Schrade. If you are anything like me, the assisted open will provide hours of entertainment during those long conference calls and times spent daydreaming at your desk.

One concern with a spring assisted knife is accidentally opening it. This is a really sharp knife so you do not want that to happen. Thankfully Schrade put some time into designing the two safeties on this knife. The first safety is located on the side of the handle and it locks the knife open or closed. The second safety is a thumb safety that will lock the blade open. You definitely want to take advantage of the safety features of this knife.

The handle on this knife is made of 1061 machined aircraft aluminum anodized a matte black. It’s got a light texturing on the sides and a little bit of light jimping on the base and thumb ramp. It’s an angular shaped handle, not particularly comfortable, but solid and reassuring. Schrade did carve out something of a finger groove to make the handle a little more ergonomic. All in all it’s a solidly made handle. A black glass breaker is set into the butt of this knife. It’s actually a pretty good sized breaker for a smaller knife(as you can see in the picture above). In a pinch this would have no problem breaking glass although ideally I would have something bigger.

There is a pocket clip on this knife. It’s made of steel with a semi-glossy black finish. It rides pretty low in the pocket which is good for concealment. This clip only works for tip down carry, which in this case makes sense due to the way you would draw it. All in all I would say this is a nice clip with good placement.

This is a fun knife that I like to keep around the house and take out with me occasionally. For an EDC blade I would go with something a little more practical; a more conventional liner, lockback or frame lock knife depending on what I feel like carrying that day. Also, I wouldn’t recommend this knife for self defense. I know a lot of people like the idea of using it for that purpose because it is an assisted knife. Really, I would much rather have a bigger knife in that kind of situation. The bottom line is that this is a very well made knife that has been a lot of fun owning. 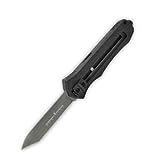 The best place for more reviews from people who have owned the knife is on Amazon. Click here see what the reviewers on Amazon have to say about the Schrade OTF.