As most of you know, the Ontario Knife Company threw down the gauntlet a little over a decade ago with the Rat Model I. At the sub-$30 price point, the EDC knifebuying public received a well-constructed product with a slick action, great ergos, good-enough steel, and simple-but-effective blade geometry.

Since then, OKC followed up with the Rat II, which has become maybe the most ubiquitous EDC knife on the planet earth. And, uh, they didn’t have to do much else. Except maybe assume a comfortable posture on the throne they built and watch the money roll in. From the moment the Rat II developed a buzz, it’s been arguably the budget knife to beat in terms of features-to-cost. Buy the QSP Penguin at BladeHQ
Buy on Amazon

In truth, we consumers have been the real winners in this knock-down, drag-out fight among manufacturers to give us more for less. I monitor the value category quite a bit, if only because it gives me a great way to reward my impulsiveness while adding knives to the drawer that I actually like carrying and using. Within the last year especially it seems like the QSP Penguin grew into something of a dark horse entry into the value EDC category, and eventually my curiosity shouted down any other reservations.

Cutting to the chase: the QSP Penguin feels in my hands like a sixty dollar knife. The build quality is easily on par with what brands like Kizer, Civivi, or even Spyderco are offering at their budget price tier. If someone put the Penguin in my hands and asked me to guess what it cost, I’d guess much higher than $30.

So don’t kill me when I address the elephant in the room, but I suppose the QSP Penguin represents the platonic ideal of a Chinese-made knife: getting more for less. Too often, we end up with a copycat of a known design from a reputable company that disappoints as soon as we get it out of the box. And that suspicion is certainly warranted given the frequency of how often it seems to happen to us.

QSP, though? They seem legitimate and eager to contend. Just on paper I was excited to get a combination of D2 and micarta in a thirty dollar package, or at least intrigued enough to throw the knife in the cart. I figured something along the way would fall flat, but I only grew more impressed with the design the more I got to know it.

The QSP clocks in at 3.2 ounces of weight, with a 3” blade and a closed length of 4.” The knife is about 1.25” across its widest point laterally, and just less than half an inch thick, not counting the clip. It’s sits little taller than a Rat II and is infinitesimally thicker, but in all other dimensions it’s nearly identical. It’s also significantly smaller than that next step up into that category of full-sized knives like the Rat I or Spyderco PM2. Onto the main event: D2 steel and a full, absolutely traditional wharncliffe. While I previously wrote about the benefits of the blade shape’s self-defensive utility in my CJRB Talla review, I’d be remiss not to note here that the QSP could be pressed into a similar role and gives you just about the same amount of cutting edge as the Spyderco Yojimbo.

For me though, the Penguin excels at far more genteel purposes. If there’s something you’d use a utility knife for, the Penguin can sub in easily. The tip is extremely easy to control, but the design of the knife ensures that you won’t over-penetrate what you’re trying to work on, so it’s good for scoring or precision cuts. Additionally, that blade shape can generate enough power to go through denser material with downward push cuts. And, being perfectly straight, it’s easy to sharpen. Or at least as easy as D2 is capable of getting. Thankfully, my QSP came from the factory hair-shaving sharp. This is a nice box to check if you want to give a non-knife person a gift that will have a good edge right out of the gate—and will likely stay that way for some time if it endures only the kind of light office use the layperson will throw at it.

Another “I really get this for less than thirty bucks?” feature: micarta. The QSP Penguin is available in a few fun colorways, but I opted for a nice shade of bluish green. Combined with the polished stainless, the Penguin is a real attention getter and especially pops when set alongside more tactical blades. It can do serious work, but the green + stainless option seems especially anodyne and office friendly. The ergos are good; maybe not fantastic, but certainly beyond what I would have expected for the price. (Sensing a theme yet?) All of the stainless hardware on the knife is well-polished and adequately rounded, so there aren’t too many hot spots to be found, even though the knife is generally squarish.

For power-type cutting, the knife feels good with the thumb resting on the functional-but-nonagressive jimping, and for precision cuts the index finger easily settles onto the spine of the blade. The micarta has a subtle, natural texture that provides friction, and the Penguin never feels like it’s going to squirt out of your hand under use. The micarta’s not as toothy as a good G10, but it’s certainly grippier than molded plastic. The clip is an excellent deep carry variety that puts all visible handle well below the seam of the pocket. Here, the bright stainless finish gives this additional “gentleman knife” points: most will assume you have a pen in your pocket; not a medium-sized blade. If we’re picking nits, flush-sitting screws would be a nice thing to have, but they’re rounded and the clip is tensioned well enough that the Penguin will slide into a pocket with ease. Carry is tip-up only, but reversible for the right or left side.

The final perk: the action is really, really good.

I normally didn’t care for thumbstuds until I (like everyone else on the planet) bought a Rat II and realized, “Oh, okay: this is how it’s supposed to work.” Flick a good design with the thumb and the blade is supposed to fly out and into lock-up. There’s a small learning curve (as evidenced by my father, who still can’t figure it out on his Rat II), but once you get it it’s second nature. The QSP Penguin is similarly excellent. The detent seems just right, and the stepped thumb studs are actually the one part of the knife that’s left a little more squared-off, so it’ll easily grab the meat of the thumb pad. I can foresee how that could, in theory, be a little hard on one’s pocket lining over time, but the design decision really lets you feel like you’ve got good control to flick the blade out regardless of your digit’s angle of approach. Blade centering is immaculate both closed and open with no perceptible play. Liner engagement is adequate: a good 90% of the surface makes contact with the blade and finds its mark consistently. There’s only really a twentieth of an inch-thick piece of metal here, so I wouldn’t put the QSP into “hard use” category, but I feel like you’d need to be trying to induce a failure to get it to happen.

If you were wondering, the QSP stands for Quality, Service, Price. It’s hard not to read the Penguin as working proof of that ethos. But given how neatly the Penguin fits into that box of maxing out the feature set at the $30 price point, where does QSP go from there? A browse through their product lineup indicates they’re answering that question pretty well. For ten dollars less, the QSP Parrot would make for a good first knife for a youth, though the lower price comes with the compromise of 440C steel and plastic handles. For ten or twenty dollars more than the Penguin, there’s a host of other “bird” knives that will give you a multiplicity of deployment and blade choices. Really going up the ladder to the $200+ Woodpecker will get you a titanium frame lock and M390 steel. 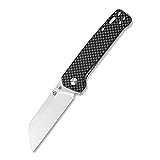 Editor: I recommend purchasing the QSP Penguin at BladeHQ or Amazon. Thank you for reading.