Last Updated: August 26, 2019
Some knives never quite get their due. The community only has so much bandwidth for new product every year, and the criteria for making the transition from flash in the plan to fully qualified classic are hazy. We see not so good knives getting attention they don’t deserve, and good, even great designs collecting dust in obscurity a year after their release.

Buy the Ontario Utilitac 2 at BladeHQ

While the fate of the Utilitac II isn’t quite that tragic, it seems like it’s well on its way to being forgotten. Which would be a shame, because it is a really good knife. Without even looking that closely, it checks a lot of boxes: great price, a lot of options, and a custom maker pedigree. But when you look closely, you see a knife that is thoughtfully designed, bringing a ton of consideration and character to budget knife design.

One thing to note: the Utilitac II comes in a variety of configurations, some of which are so different as to essentially be different knives. There are two different blade shapes – a tanto or a clip point – and two different handles – rounded or coffin-shaped – to choose from. You can get either blade shape with either handle. My Utilitac II has the clip point blade and the rounded handle.

The Utilitac II has a blade length of 3-7/16”, a handle length of 4-5/8”, and an overall length of 8”. It is made in Taiwan for Ontario Knife Company. The Utilitac II weighs 5.6 oz., which puts it firmly in the Mid-Size category. For me, this is about as big a knife as I’m likely to EDC. I don’t mind the Utilitac II’s dimensions. It’s an integral part of its character. You either like this size and shape of knife, or you don’t.

The Utilitac II was designed by Joe Pardue, son of Griptilian designer Mel Pardue. The younger Pardue’s design style is more flamboyant than his father’s, but still conveys the same overarching commitment to functionality that makes the Griptilian so likeable. The most eye-catching element of any version of the Utilitac II is the blade. Both the tanto and the clip point have exaggerated comic book proportions. The clip point is wide and curvy. It is almost reminiscent of the blade on the Spyderco Rubicon, albeit with a more aggressive tip and a slight recurve.

I’m not crazy about recurves in general, but the one on the Utilitac II is inoffensive. And it does make the belly extremely aggressive. Combine this with the excellent overall grind and very competent edge bevel, and you get a great mid-size cutter. The Utilitac II chews through thickish media with ease. Cardboard, foam, plastic – these are the sort of cutting tasks the Utilitac II is made for. In delicate cuts it is less impressive, but by no means bad.

AUS-8 is good stuff. Anybody can sharpen it. It ls one of few steels that I feel genuinely confident with every time I take it to the stones. It offers reasonable toughness and reasonable edge retention. High end steels are pretty much all good, but in the budget realm AUS-8 is a good steel amongst merely acceptable ones. And on the Utilitac II, AUS-8 is really allowed to shine. The grind emphasize its good qualities and minimizes the bad. I have no complaints about the steel, and wouldn’t even if the Utilitac II was twice the price.

For all the character in the blade shape, the Utilitac II’s handle is comparatively quiet. However, ‘quiet’ does not equal ‘bad,’ and while the handle won’t change your life, it’s certainly acceptable. The finger groove is big enough to be comfortable, and it transitions into the finger guard in a gentle way to avoid feeling cramped. If anything, it reminds me of Emerson’s handle designs – which is no bad thing at all.

I find that what material a handle is made of is less important than how well that material is executed. This must be why people hate on the standard Griptilians’ plastic scales but don’t seem as bothered by the Delica’s FRN. The Utilitac II’s plastic scales are done right. The stepped, three layers of texturing are all tactile, and make the handle feel contoured even though they aren’t. I like the visual interest that the faux bolster imparts to the design.

Pardue and OKC also nailed the width on this knife. I don’t think that thinner is always better in pocket knives. Sometimes, a design works better if it’s a little thicker, and that’s certainly the case here. The thickness of the handle functions as a counterbalance to the beefy blade, and gives you some exact and intuitive control over your cuts. Of course, there is one way in which the thickness is less ideal, and that’s in pocket carry. As someone who doesn’t really carry anything else in my knife pocket, I don’t mind the chunkiness, but some certainly will. On the other hand the pocket clip, also a very Emersonian design, works well. In the tip down configuration (the way the knife comes), it travels just far enough across the knife to keep it stable in carry.

There really is no excuse at this point for pokey deployment on a knife, no matter the price. Obviously corners will be cut on budget knives, but the Utilitac II is yet another argument in the ongoing case that a good pivot is never something that needs to go. A simple phosphor bronze and Teflon washer setup and a punchy detent combine to give the Utilitac II a glass-smooth, lightning quick, and immensely satisfying deployment.

You kick off this satisfying deployment via ambidexterous thumbstuds. Another small thing that the Utilitac II absolutely nails is thumbstud placement. Holding the knife naturally, your thumb is exactly where it needs to be to flick the blade open. And once you deploy the knife, your thumb comes to rest exactly where it needs to be the use the knife. It sounds like a small detail, and it is, but anytime a knife can break down a time tax between you needing to cut something and getting that something cut, it should be pointed out and lauded.

This big and beefy knife uses a fairly thin liner lock, but one that has been utterly reliable in the four months I’ve owned and carried this blade. There was no play the day I got it. A little horizontal play, easily fixed by tightening the pivot, is all there is to report as I write this review. The liner travels over a fair distance, locking up at about 60%. I know that it isn’t a universally-held belief that early lock up is better, and that some makers favor late lockup on liner locks. I wonder if the late lockup here has something to do with its stability.

A generous cutout on the show side scale makes accessing the liner easy. One issue I have with the lock, however, is the jimping on the locking leaf. It’s pretty sharp and can start to irritate your finger if you’re opening and closing the knife a lot. The cutout is so effective on its own that this toothy jimping is redundant anyway, so if they ever updated this knife I’d like to see it go.

Judging by YouTube reviews and dusty old forum posts, the Utilitac II seems to have enjoyed a brief time in the spotlight before the knife community moved on to other knives. This is a shame because I would hazard to guess that this knife is outright better than just about any budget offering released this year (besides the Pro-Lite).

It’s likely better than any budget knife that came out last year, too. And I’ve never used a RAT 1 but I can’t imagine it being a substantial improvement over the Utilitac II. When it comes to visuals I think Joe Pardue’s design has the RAT 1 beat easily. The number of meaningful variations it’s offered in is also pretty impressive, even years later.

If you haven’t tried one, and if you can work with the mid-size EDC philosophy, I encourage you to give the Utilitac II a try. It’s actually a thoughtfully designed knife, and thoughtful design is refreshing at any price point. I don’t think that it’s been officially discontinued as of yet. Either way, it is still widely available, and well worth your time for any price under $40. 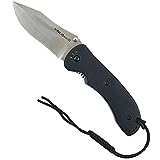 Editor: I recommend purchasing the Ontario Utilitac II at Amazon or BladeHQ. Thanks for checking out the review.