I reviewed the ESEE Zancudo back in 2014. I gave it high marks, and since then it has gone on to be my pick for the best budget EDC knife. I stand by that recommendation, and still own and use the Zancudo to this day. It’s a great affordable every day carry knife and I’m hard pressed to name a better sub $35 folder. Buy the ESEE Avispa at BladeHQ

So what about its big brother, the Avispa? It came out a couple years after the Zancudo, and while it has been something I wanted to review, I never got around to it. Until now. Will it live up to the legacy of the Zancudo? Let’s see.

The Avispa has an overall length of 8.5″, a 3.5″ blade, weighs 4.51 ounces, and is made in Taiwan. It’s a big knife. Much bigger than the Zancudo. I think that’s pretty clear in the comparison photos. Personally, this is not a daily carry piece for me. It’s more of a weekend knife. I think it could make for a great folding camp knife. For opening mail and cutting apples I’ll stick with the Zancudo, but those wanting a bigger knife will get what they want with the Avispa. The Avispa has a large drop point blade with a high full flat grind. While the blade design is unlikely to win any beauty contests, it’s extremely functional. The tip is dropped down towards the pivot, lending an almost spear point profile. There is a nice sharpening choil, and the edge has been evenly ground. Topping things off is an attractive stonewashed blade finish.

Here is a shot of the Avispa next to the Zancudo: For blade steel we have tried and true AUS-8. AUS-8 is a Japanese stainless steel. It’s on the soft side, meaning it will dull faster than premium knife steels, but it’s tough, stain resistant, and easy to sharpen. Given the ~$40.00 price tag, I’d say it’s an appropriate blade steel. The Zancudo came in AUS-8 and frankly I never cared. It sharpens in minutes.

I have been using my Avispa around the house. We have tile floors, and recently had the grout professionally cleaned. This meant we had to move most of our worldly possessions into the garage. While I was moving all my crap out of the office I came across a cache of cardboard boxes. It was a great opportunity for my Avispa. The big blade and full flat grind make it a work horse of a knife. I had no problem breaking down the boxes. I also uncovered a little manilla rope from my YouTube days. The Avispa was able to make some crunching cuts, but it tested the ergonomic limits of this thin handle. Where a knife like this shines is in basic food prep. I eat a lot of fruit and the Avispa’s thin blade is great for slicing apples. But that’s an EDC chore. I decided push the knife further and make a meal with it. We cook a good deal of chicken and vegetables at my house, so that’s the task I put it to. It works well for slicing and dicing, allowing me to make controlled even cuts. It’s not replacing my chef’s knife, but in a pinch I could see this thing cutting onions, carrots, and potatoes at a camp site. It certainly worked in my kitchen.

The Avispa’s handle is a textured FRN scale over a nested stainless steel liner on the show side, and a stainless steel lock bar on the lock side. Holding things together is a series of 4 stand offs and a stop pin. This is an inexpensive knife, but it is well made and has some nice details, including a skeletonized liner and black hardware on the show side, with silver hardware on the lock side. Fit and finish is good with all the parts lining up. You can get this knife in a variety of handle colors. This time I chose a nice olive drab. The Avispa benefits from a simple handle design. Neither the blade nor the handle look particularly impressive, but they function great. There is plenty of room for a full grip, and the knife offers plenty of traction. The handle scale is textured with a faux peel-ply G-10 look, and there is a good run of jimping on the thumb ramp. The jimping strikes that balance between providing traction and being too aggressive.

That said, this is a thin knife, so you do feel it in your hand. If you intend to use the Avispa for an extended period of time you will probably want to wear gloves. It’s fine for basic work, but if you are going to “hard use” this one, then have some leather gloves on stand by. The pocket clip is where things get interesting. The Avispa is drilled and tapped for ambidextrous tip up / tip down carry. We call this a “4 corners” pocket clip. Out of the box the knife is configured for right side tip down. I’m more of a tip up guy, like most knife enthusiasts I know, so I swapped it to right side tip up. Doing that places the pocket clip directly onto the lock bar. I believe when this knife was originally released, that interfered with the lock bar. My clip doesn’t interfere with the lock bar, but it also doesn’t touch the lock bar. There is a substantial gap. Take a look:

Obviously this isn’t ideal for a pocket clip. You aren’t going to get the kind of pocket retention most people seek out when using a pocket clip. For this reason I recommend right side tip down, or put the clip on the show side. This isn’t a deal breaker for me, but is worth pointing out.

Pocket clip issues aside, the Avispa more or less carries the way you think it would. It’s a big somewhat heavy knife. It’s thin so it won’t take up your entire pocket, but it’s definitely noticeable.

The Avispa makes use of ambidextrous thumb studs to get the blade open. The thumb studs are easy to access from the right and left side. The blade itself rides on phosphor bronze washers. The action is smooth and fluid. The detent is nice and strong, keeping the blade securely in place until you need it.

The stainless steel frame lock is sturdy and secure. No blade play on this knife, even when wiggling the blade from the very tip. The lock bar isn’t sticky, and it’s easy to disengage when you are done cutting. No complaints in the lockup department.

Heres a shot of the Avispa next to my Strider SnG. A $40 knife next to a $400 knife. There is a probably a viral video in there somewhere…

Finally I have to mention that my blade is perfectly centered. A great detail on a budget blade. I’m sure there are some slightly off center Avispa blades out there, but generally speaking you will be pleased with the QC on this knife.

I’m not sure why it has taken me so long to review the Avispa. Maybe it was the pocket clip issue originally reported when the knife was released. Or maybe because I was so happy with my Zancudo I saw no need for the Avispa. Who knows.

Regardless, I’m glad I eventually added an Avispa to my collection. Unsurprisingly, I like this knife for many of the reasons why I like the Zancudo. I prefer it over the Rat II because it’s thinner. I love the little details they managed to shoe horn into this budget blade. And you can’t argue with the utility.

In a perfect world the pocket clip would work better in right side tip up, but that’s a minor complaint. I’ll swap mine back to right side tip down after this review and call it a day.

At the end of the day I recommend the Avispa if you are looking for a large inexpensive daily carry knife, or want a good folding camp knife. I can’t think of anything I prefer in this size at this price point. Like the Zancudo, on a dollar for dollar basis it’s a tough knife to beat. Recommended. 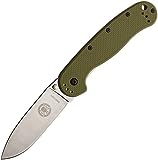 I recommend purchasing the ESEE Avispa at Amazon or BladeHQ. Please consider that buying anything through any of the links on this website helps support BladeReviews.com, and keeps the site going. As always, any and all support is greatly appreciated. Thank you very much.