Buy the CRKT S.P.E.W. at BladeHQ

With that out of the way, lets get down to business because I really like this one. The SPEW (really, the S.P.E.W.) stands for Small Pocket Everyday Wharncliffe, and it is a really interesting design from custom maker Alan Folts. Alan makes his knives in a small shop on the Florida coast (a couple hours away from me actually) and he is an exceptionally nice guy. He is a classically trained artist, and has been refining his approach to knife making for many years now.

In addition to crafting beautiful custom pieces Alan partnered with CRKT and released a production knife, the Folts Minimalist, in early 2010. I reviewed that knife a while back and was extremely impressed so I was really excited to learn about the SPEW. The SPEW fills a similar niche to the Minimalist. It’s a small fixed blade, designed for every day carry.

The SPEW has an overall length of 6.25″, features a 3″ blade, and it weighs 3 ounces. As I mentioned earlier, this would make a great fixed blade for EDC. This knife is also small enough to be used as a neck knife. Personally, I like to just carry this one in my pocket (in the sheath of course – more on that later).

The blade is a wharncliffe shape with a high hollow grind and an extremely sharp tip. This tip is perfect for detail tasks and will make quick work of whatever it is applied to. Now, a tip this thin is useful, but it’s also delicate. The SPEW is a knife you will want to be careful with if you expect that needle fine tip to survive daily use. Dropping this knife on concrete could end it all and you will not want to pry with this tool either. But since I knew that this tip could be an issue, I took it upon myself to thoroughly test. I put this knife through a fairly rigorous cutting test that included stabbing the knife through a stack of cardboard about 50 times. The tip held up really well.

Columbia River chose 5Cr13MoV stainless steel for this one, which isn’t my first choice, but it actually worked out really well. During my little cut test I created a mountain of cardboard shavings, and stabbed with the knife dozens and dozens of times. After the entire ordeal was over the SPEW was still held a paper cutting edge, which frankly came as a surprise since this is a soft steel heat treated to around 56 HRC.

My only issue is that the 5Cr did not want to take an edge easily and I was never able to get my knife absolutely hair popping sharp. While I’m no sharpening wizard, I attacked this thing with both diamond stones and Japanese water stones and was never able to get the edge quite up to spec. I know I’m not alone in this discovery, and I suspect it’s because of the low carbon count of this particular steel.

The handle on the SPEW is G10 over a full stainless steel tang. The G10 is red and black it is a nice material to see on a knife at this price point. The G10 has been machined to offer enhanced grip and visual interest and the corners have been nicely rounded. Everything screws together, and I am very pleased with how well all the pieces line up. The handle is definitely well made.

The ergonomics of the SPEW really interested me because the Folts Minimalist is one of the most comfortable edc knives that I have ever held. While the ergonomics of the SPEW aren’t as aggressive as the Minimalist I was not disappointed with the way this model felt in hand. Like the Minimalist the SPEW is designed for a 3 finger grip, and it also features a small lanyard for your pinky. This is a comfortable way to wield a small knife and I am very pleased with how well that lanyard performs. Alan also included a nice finger choil in the design along with a jimped thumb ramp. The jimping that lines up with the G10 doesn’t offer any traction, but the jimping at the top of the ramp works as advertised. All in all I am very pleased with the “ergos” of this little knife.

The SPEW comes with a very nice molded plastic sheath. The blade slides in with a firm snap and retention is very good. There is a little rattle, but this knife is not coming out unless you want it to. I like how a place for your thumb is included on this sheath, it means that you can easily pop the knife out with your thumb. I like carrying this one in my pocket, and it’s great to be able to deploy the knife with one hand and not have to remove both the knife and sheath from the pocket.

If you would rather carry the SPEW another way, the design offers a couple other options. CRKT includes a piece of paracord so you can lash this knife down or use it as a neck knife. I will say, if you want to use the SPEW as a neck knife, use a break-away chain or a cord lock so if the cord does get caught up you won’t strangle yourself! CRKT also offers a more traditional belt loop with this knife too – and you could mount the SPEW either horizontally or vertically. I like the sheath and the variety of carry options you get. The SPEW is another awesome knife from CRKT and Alan Folts. Fans of the Minimalist should be excited about this one, and I am happy to report that the SPEW does not disappoint. You get a wonderfully functional and compact design from Alan that has been well-executed by the folks at CRKT. I like the variety of carry options and just the overall package – it’s all been really well done.

My only issue pertains to the steel, and I think it is a pretty minor issue. Sure, I would love something that can take a finer edge, but the SPEW cuts, and it cuts surprisingly well. I gave the knife a series of hard tests and it passed them all with flying colors.

I think this is a good knife for the money and I recommend the SPEW if you are interested in the design, or want a little fixed blade for daily use. 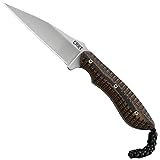 I recommend purchasing the SPEW from Amazon or BladeHQ. Please consider that purchasing anything through any of the links on this website helps support BladeReviews.com, and keeps the site going. As always, any and all support is greatly appreciated. Thank you very much.