For a long time, I didn’t really ‘get’ CRKT. When I first got interested in knives, the company was well behind the curve. It seemed stodgy, outdated. Companies like Spyderco and Benchmade opened my eyes to what a modern pocket knife could be; CRKT just confirmed the pedestrian image I had of knives before I became a nerd about them. My only CRKT purchases were the requisite Drifter and a secondhand Tribute that I paid too much for. Buy the CRKT Pilar at BladeHQ

This was back in 2012ish, and I don’t think my dismissive attitude then was totally unwarranted. But when CRKT had its renaissance a year or two later, turning to collaborations with trendy designers to give their lineup a shot in the arm, I continued – wrongly – to ignore them. Probably this renaissance coincided with the height of my own knife snobbery. I was laboriously ascending the ladder of production knives, one incrementally more expensive purchase at a time, and didn’t think I’d ever want to come back down.

But this year, my and CRKT’s wavelengths aligned – I finally understood the appeal of what it does. There is huge merit in putting out really good designs in universally affordable trim. It doesn’t move out of this zone – like, at all – but I would argue it owns it. Even other makers that trade in the affordable knife market lack either CRKT’s sheer range, commitment to price point, or both.

The Pilar, undisputed star of CRKT’s 2017 lineup, seems to embody all of the company’s strengths. It seemed like the perfect knife to reacquaint myself with CRKT, so I picked one up. It’s an intriguing, fun knife, but does it measure up as a tool? Let’s take a look.

I’m going to spend some time discussing the appearance and style of the Pilar. While normally (and rightly) secondary to a knife, they’re a central part of the Pilar. Its very best qualities are intangible, non-performance things and it would be a disservice to the designer not to talk about them. So, yeah: this is a great looking design from Jesper Voxnaes. His tamer designs don’t move me, but when he cuts loose and gets a little weird I’m interested. One thing I wonder about is whether designers save their “best” designs for high-end collaborations. In this case, though, there’s no question Voxnaes gave CRKT A+ material to work with. Swap out the low-end materials for ritzier ones and the Pilar could be a GiantMouse or Viper release without missing a beat. It’s fun to look at, fun to hold, and fun to use. There’s a reason the Pilar is all over social media. It’s a gear geek’s knife, a knife nerd-seeking missile. Quirk is our catnip and this one has character for days.

The Pilar’s blade shape is a combination between a cleaver and a wharncliffe. As an all-purpose EDC tasker I find it adequate, never inspiring. There’s an ergonomic issue that plays into this (see below), but the blade presents two issues of its own. The first is length – there are common chores that the Pilar’s blade won’t be big enough to accomplish. This wouldn’t be a huge sticking point, but at 4.2 oz. I really think we need more utility. A lack of an acute tip also hurts. Opening bags or clamshell packaging, you’re going to have to fiddle with the Pilar to align its snubby tip where you want it.

I think we need to start considering 8Cr13MoV an unacceptable choice for EDC steel. Yes, it is easy to sharpen, but so are all bad steels. Edge retention is poor, and it discolors and smudges with any contact with skin. My prediction is that we’re about a year or two away from either CTS-BD1 or 14C28N becoming the default budget knife steel – and that day can’t come soon enough, because I’m done with 8Cr13MoV.

If you count the half-and-half choil, the Pilar is fully 2/3 handle – and I’m not complaining. The thick scales are made from a lightly textured stainless steel, held together with an aluminum backspacer. The entire handle has been given a generous chamfer, addressing virtually all potential hotspots At the risk of splitting hairs, there are two major ways in which a knife can be ergonomic: 1) is it comfortable to hold? and 2) do the ergonomics facilitate actual use of the knife? The Pilar excels at the former and somewhat flubs the latter. When you look at a picture of its handle, you think “Yes.” When you buy one and hold it you think “YES.” But then you use it and think, “Oh. Hm.” The problem is, the choil puts your forefinger right up against whatever you’re cutting. There’s no ‘dead zone’ between the end of the choil and the start of the cutting edge. Your knuckle drags across cardboard as you slice it. Cut up an apple and you’re going to have to wash your hands afterwards. With only 2 inches of cutting edge, you really need to be able to leverage every last centimeter, and the interplay of the finger choil and the cutting edge makes this hard to do. Although configured solely for righties, the tip-up/tip-down pocket clip is straightforward, unobtrusive, and durable. One nice detail is that it is set into a cutout, eliminating side-to-side wiggle. But yes, 4.2 oz. is way too heavy. Weight distribution can make heavy knives seem reasonable, but when you have a blade this compact, those four full ounces have nowhere to go. In lighter clothing like shorts it felt like I had a hockey puck clipped to my pants. Often it was easier to carry it loose in my pocket. This knife should have had a G-10 front scale.

CRKT and Voxnaes buried the Pilar’s thumb oval as far down as they could while still making it accessible for both right- and left-handed people. It works well, flicking out with ease and not so detent-heavy as to make slow-rolling impossible.

The no-fuss deployment works alongside a well-executed stainless steel frame lock. Engagement is comprehensive, with nearly the entire lock face meeting the tang and no play in any direction. Bonus points for the stylish little cutouts on the lock bar for disengagement – they look cool and work well. One issue of note here is the slickness of the scales. The Pilar is a small knife, and when closing it there really isn’t anywhere for your fingers to go. The barely-there texturing on the scales makes finding reliable purchase difficult. Glaringly unsafe? No, but annoying – and again, a G-10 scale would have fixed this.

I have to applaud CRKT for this knife. With a design this good, many other companies would succumb to the temptation to bedizen it with all sorts of trendy features and materials, and price it in the $150-$250 range. This is clearly their best design of 2017 and it isn’t even the most expensive.

And yes, this knife cries – sobs, even – for a material upgrade. Me, I’d like to see a minor upgrade to G-10 scales, a liner lock, and CTS-BD1 steel. But the tradeoff with the current materials is that CRKT priced the Pilar at a stunningly low $25.

So check it out. It’s a deeply cool knife that I enjoyed reviewing, even when it wasn’t performing as well as I hoped. At $25 I can give it an unreserved recommendation. 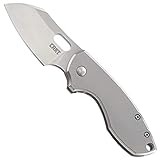 I recommend purchasing the CRKT Pilar at Amazon or BladeHQ. Please consider that purchasing anything through any of the links on this website helps support BladeReviews.com, and keeps the site going. As always, any and all support is greatly appreciated. Thank you very much.