Time to face it, fellow knife nerds – We’re living in an era of over-saturation. With so many companies releasing a deluge of new designs, it’s difficult to pluck the hits from the static. But after months of blade malaise, something interesting caught my eye – A cheap, rugged looking, aggressive green monster with a nifty locking mechanism. It’s the Cold Steel Bush Ranger Lite, a budget iteration of the company’s $200-plus outdoor original. After several months of testing, one thing’s for certain: Of all the Cold Steel knives I’ve handled, the Bush Ranger Lite is definitely the Cold Steel-iest.

As you’d expect from a sub-$30 knife, Cold Steel has chosen fairly basic materials. The handle is comprised of 4.875-inches of Outdoor Green GFN, measuring more than half an inch thick (0.65”). The flat ground 8Cr13MoV blade features a satin finish along the length of its 3.5-inches, with a tallness of 1.75 and a thickness of 0.65, respectively. Overall length and weight sit at 8.375-inches and 4.8-ounces. The forward swedge flows gracefully into a bowie-style clip point, giving the Bush Ranger an elegantly aggressive appearance.

If these handle scales look familiar, you’re not wrong. The Bush Ranger’s outline is very similar to the Cold Steel Finn Wolf, a Scandi-ground folder I reviewed a couple years back. If you squint, these are almost the same knife. But while the Wolf’s grind lands it in the outdoors-only curriculum, the Bush Ranger’s mandate is decidedly more gen-ed.

But speaking of outdoor credentials, here’s an interesting note – The Bush Ranger Lite will strike a ferro rod. Even in a closed position, this pocket knife is more than capable of casting sparks. This is certainly safer than previous folders I’ve used to make fire, since I was always concerned about applying force to the back of the blade.

The Bush Ranger fits perfectly in my medium/large sized hand. The hook on the back end rests perfectly against the heel of my palm, creating a feeling of security. Balance is good, and at no point did I encounter any hotspots.

Despite the squared-off spine, the backside of the Bush Ranger’s blade provides a generous, comfortable place to rest your thumb. There are some rough edges on the underside of the GFN, but nothing out of bounds for this price range.

The pocket clip is small, tight, and unobtrusive. This is by no means a deep-carrying tool, but the clip performs adequately and disappears against my palm when the knife is in use. There’s no flat resting surface under the tongue, however. This means that your pocket seam will be slowly digested as it drags across the textured handle. Cold Steel has also opted for tip-up only carry, reversible to the left or right side. This, along with the lefty-friendly nature of the lock, makes this a truly ambidextrous knife.

As for the actual ride, the knife carries surprisingly, well, Lite. Don’t get me wrong – The footprint is massive. It shared my right front pocket with my wallet and pen, and there was no mistaking its presence. That being said, the airy nature of GFN made this an area problem only, not a question of mass. It was also surprisingly benign in daily activities, such as walking, sitting, and climbing ladders. At no point did I feel that the Bush Ranger limited my flexibility. Until reaching for my wallet, of course.

For the longest time, the keystone of the Cult of Lynn Thompson (h/t Advanced Knife Bro) has been the sacred Tri-Ad Lock. Of all the mechanisms in the hobby, this one seems to have the most fervent devotees. While the Bush Ranger Lite isn’t technically a member of the Tri-Ad tribe, it does boast another interesting innovation from Cold Steel – The Rocker Lock. That’s the sliding piece you see on the show side of the blade. Here’s a look at it stripped down to bare metal: As the breakdown confirms, the Bush Ranger is lacking the signature stop pin of the Tri-Ad. However, the Rocker’s additional sliding stop adds a sense of solidity to the traditional back-lock mechanism.

I will say this – This knife benefited greatly from its initial disassembly and maintenance. It was noticeably stiff out of the box, running dry on its Teflon washers. Some cleaning and a little oil worked wonders, and the Bush Ranger became a much smoother operator. The CLACK its lock snapping into place is a mildly addictive sound.

Closing can be a bit trickier. Cold Steel’s locks are notorious for their stiffness, and this is no exception. And because of the lack of a forward finger choil, this is really a knife that requires two hands in order to close safely. Otherwise, you risk shaking that sharp edge down into you knuckle, which would only be exacerbated by the tendency of back-locks to snap shut with authority.
In daily use, I found this to be an eminently capable all-around cutter. From food prep to package duty, the Bush Ranger was a solid companion. But this is a Cold Steel, after all. So, what sort of tester would I be if I didn’t at least attempt to baton with it?

The surprise isn’t that the knife got stuck. I intentionally used a piece of wood that was larger than a pocket knife should be able to tackle. The shock was what happened after I hammered, pulled, and pried the Bush Ranger loose. I disengaged the rocker tab, pressed down the back-lock, and the knife closed as though nothing had happened. I opened and closed the knife several times, just to be sure I wasn’t losing my mind. Blade play? Zero. Centering? Dead-on. Not even so much as a roll on its 8Cr edge. The FRN handle held up to the prying as well, with no new gaps developing around the back spring.

Here is a parting size comparison with the Spyderco Native 5 and Mora Companion: The Bush Ranger Lite is, without question, the toughest budget blade I’ve come across. It’s rugged, well built, and perfectly suitable for everyday abuse. And from a sheer bang-for-buck perspective, I’m not sure there’s another knife under $30 that gives you this much blade, handle, and versatility. Sure, the materials are basic and the design isn’t for everyone. And if you spend even part of your time in an office, it probably isn’t the blade to use in the break room. I certainly raise a few eyebrows when I pulled this clip-point monster out of my pocket.

But under almost any other circumstance, the Bush Ranger Lite is a heck of a tool. Buy one, beat the heck out of it, and get another if it breaks. Overall, I this is an outstanding budget effort from the cult of Cold Steel.
Links 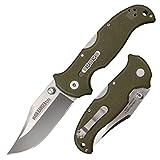 Editor: I recommend purchasing the Cold Steel Bush Ranger Lite from Amazon or BladeHQ. Thanks for reading.